Of all the phrases I least want to hear to describe a road I’m on, “ice chute” is near the top. Yet that’s how the Colorado 4×4 Rescue and Recovery group describes this steep mountain pass that caused the kind of four-Toyota-Tundra pileup you’d expect to see in civilization rather than out in the wilderness. Getting all four trucks out of trouble and helping a fifth Tundra with them was a truly complex and fascinating operation.

The five trucks were driving on a trail just south of Almagre Mountain in Teller County, Colorado when they reached a particularly steep downhill section. According to Colorado 4×4 Rescue and Recovery, the truck at the back of the group was able to stop a few hundred feet behind the treacherous section of road, but the other four weren’t so lucky. 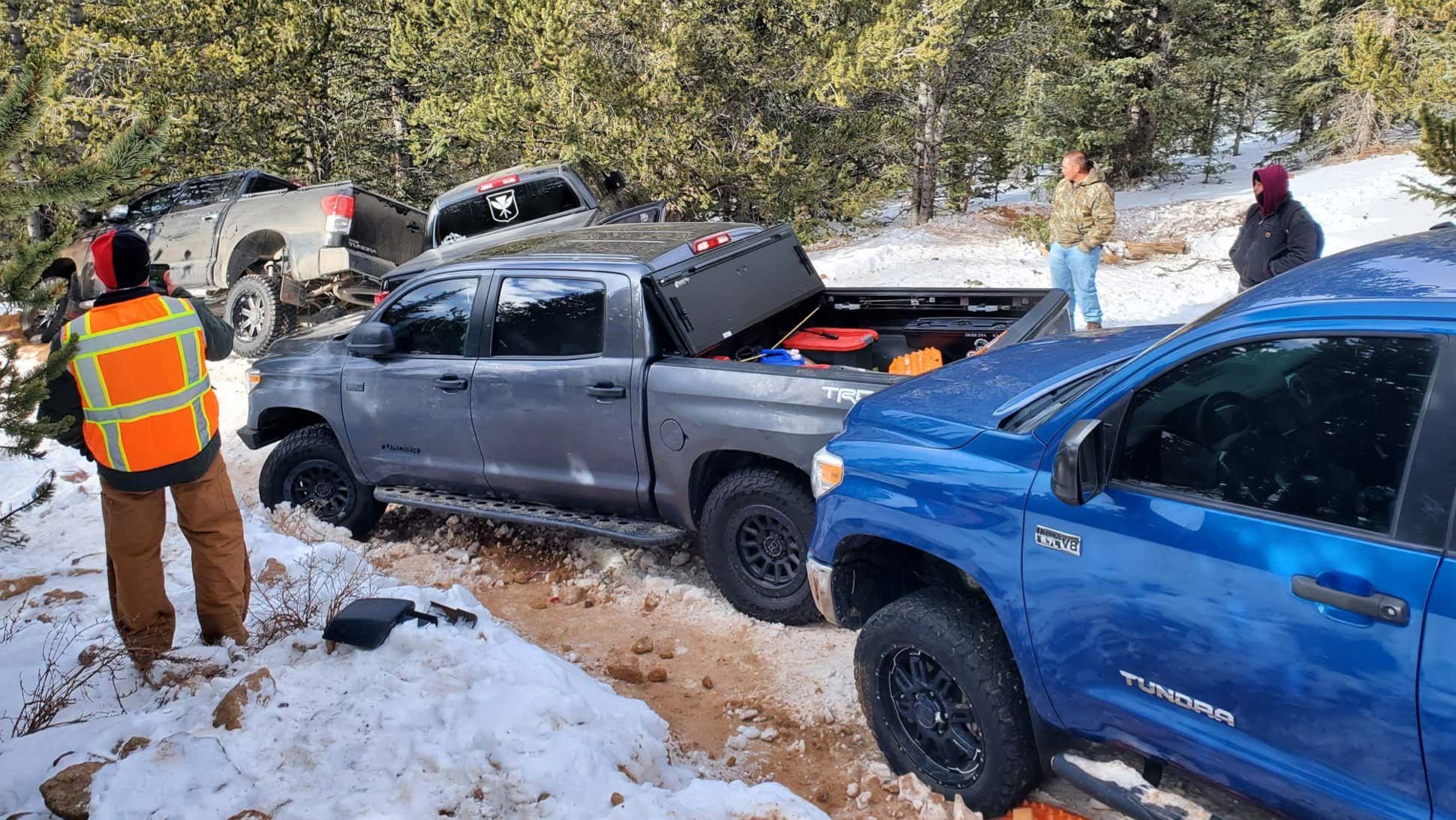 Jessica Elizabeth, who helped with the recovery, posted on Facebook that heavy traffic on the trail had melted the snow, at which point it re-froze into an ice sheet. The four Tundras at the front of the pack hit the ice sheet, which was on a roughly 30 percent grade, causing them to lose any hope of steering or stopping.

Members of the volunteer recovery squad went to great lengths to avoid adding to the wreckage on the trail, which member Doc Bunger confirmed on Facebook was the largest pile-up they’ve ever responded to.

The Colorado 4×4 Rescue and Recovery group says that all of the responder vehicles had chains on all four of their tires. The effort took seven team members on-scene, one radio monitor and three dispatchers for a combined 136 man-hours of work.

The rescue mission lasted from roughly 7 a.m. on Sunday until the last responder got home around 11 p.m. Untangling the conga line of Tundras involved a complicated series of winches and redirecting pulleys called snatch blocks.

Fortunately, the Tundras were able to drive themselves back down the rest of the trail once they were apart and off the ice sheet. Either way, it’s a good reminder to be careful out there, and be sure to prepare for possibly changing conditions. Chains are a good idea, folks.

The recovery group is a volunteer-led non-profit run completely off of donations, so there was no bill for the recovery. You can see more photos of the recovery effort in Colorado 4×4 Rescue and Recovery’s Facebook album here.

Related posts:
Tim Cook Wouldn't Take the Meeting When Elon Musk Proposed That Apple Buy Tesla
Consumer Reports: 2020 Tesla Model Y Test Results Revealed & Discussed
Best News
Nico Rosberg has no plans for racing return | F1 News by PlanetF1
01/16/2021
FBI: No crime committed as ‘noose’ rope was there in 2019
06/23/2020
Why VW Pulled The Plug On A 400bhp VR6 Arteon R
06/23/2020
2021 Kia Grand Carnival breaks cover – solid looker! – paultan.org
06/24/2020
New Volkswagen Arteon Shooting Brake arrives as part of facelifted line-up
06/24/2020
Recent Posts
This website uses cookies to improve your user experience and to provide you with advertisements that are relevant to your interests. By continuing to browse the site you are agreeing to our use of cookies.Ok