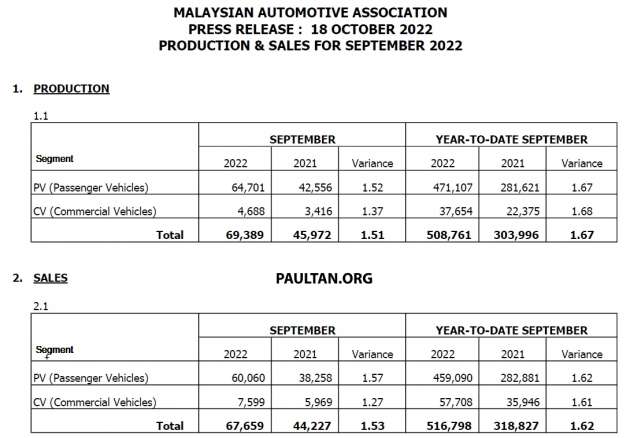 The Malaysian Automotive Association (MAA) has released vehicle sales data for the month of September 2022, announcing that a total of 67,659 vehicles were delivered to buyers last month. This is a marginal increase of 99 units from the 67,560 units (originally reported as 66,614 units) sold in August, or an increase of 0.15% in volume.

The association said that the consistent volume was due to car companies continuing to fulfil many of the bookings received before June 30, 2022, when the sales tax exemption ended. The performance last month and also in August indicates that production levels seem to be stabilising somewhat after a patchy July.

The association projects sales in October to be similar to September levels, with car companies continuing to attempt fulfilling the backlog of vehicle orders made during the sales exemption period. With the government’s decision to allow the SST exemption to be applied for any vehicle booked by June 30 and registered before March 31, 2023, the numbers should likely be consistent right into the end of 2022, with final volume very much determined by production ability.