Perhaps tired of throwing good money after bad to repair the aging clunker he has had since he was invented over 150 years ago, or maybe tempted by the sleek new models he sees in all those sleigh magazines like Sleighweek and Reindeer & SkiTrack, Santa has traded in his traditional sleigh for a new model. And not just any model, this one’s literally the Lexus of sleighs, the Lexus HX Sleigh Concept, released in CAD by Lexus of Canada, a place where they know sleighs.

“I’m a simple man, but the ol’ sleigh has been looking a bit less refined than it used to,” Lexus Canada quoted Santa. “It was time for me to upgrade my capabilities to help deliver toys to all the children on my nice list more efficiently, so the Lexus HX Sleigh Concept couldn’t have come at a better time,” Santa said in the press release. “Mrs. Claus is excited to drive it, too!” 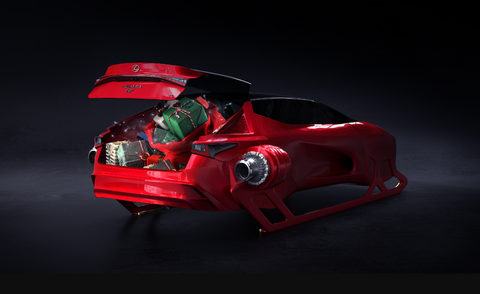 Likely all Christmas music all the time.

The purpose of the two jet engine-looking attachments on the rear fenders is unclear. A point muddled further by Lexus Canada when it sought out, of all entities, Rudolph to explain the sleigh’s engineering. The reindeer claims in the release that the sleigh has “hybrid electric technology” but in the same sentence also says it “runs on 100% renewable holiday spirit.” Powertrain design appears to be open to debate. Besides, what does a reindeer know about automotive engineering? But if you believe in Santa it doesn’t really matter how the thing runs, he’ll find your house and get down your chimney. So you better watch out.

Related posts:
Don’t Look At This Chrome-Wrapped Tesla Roadster Directly, It May Blind You
80-year old Porsche fan picks 80th Porsche on 80th birthday
Best News
Ferrari’s Charles Leclerc turns first laps of F1 2021 at Fiorano
01/26/2021
FBI: No crime committed as ‘noose’ rope was there in 2019
06/23/2020
Why VW Pulled The Plug On A 400bhp VR6 Arteon R
06/23/2020
2021 Kia Grand Carnival breaks cover – solid looker! – paultan.org
06/24/2020
New Volkswagen Arteon Shooting Brake arrives as part of facelifted line-up
06/24/2020
Recent Posts
This website uses cookies to improve your user experience and to provide you with advertisements that are relevant to your interests. By continuing to browse the site you are agreeing to our use of cookies.Ok