Brown regarded his final-round duel against fellow three-time champions and best friend Steve Torrence as a heavyweight slugfest à la the Hollywood one from Sylvester Stallone’s Rocky film. “That’s Rocky Balboa right there (referencing Torrence) and I’m Apollo (Creed). To get this win, it was truly remarkable. We just built on it every, every lap. Any time you can do this and get one of these (Wally trophies), it’s just so special.”

His Matco Tools/Toyota team stepped up from Saturday’s lone day of qualifying, during which the car couldn’t make it down the racetrack under full power in either pass. Forget Rocky and Apollo. Brown needed a Clark Kent-to-Superman transformation to eliminate some of Top Fuel’s heavyweights: Doug Kalitta, top qualifier Billy Torrence, Brittany Force, and finally Las Vegas winner Steve Torrence. And he got it.

“We went through the trials and tribulations, but we survived. Hard work prevails,” Brown said. “You beat resistance with persistence, baby.”

Torrence said, “I won my first professional race at Atlanta in 2012, and I really wanted to win the last one. But we just didn’t get it done. I don’t like to lose to anyone, but it doesn’t sting quite as bad when it’s my brother and when it’s a great race like that one. That team’s worked really hard, and I’m sure this isn’t going to be the last time we line up beside them in a final round this year.”

It was Brown’s 68th overall victory and 52nd in Top Fuel. It tied him with five-time champion Joe Amato, one of his Northeast racing heroes, for third on the class’ all-time list.

Brown said it’s “huge, just to be mentioned in the same sentence with Joe Amato. He was always a huge hero of mine. I remember growing up and he had the motto ‘Hang on Sloopy, because here comes Joe.’ I remember him winning those back-to-back championships and being a dominant force in drag racing.

“He’s really a true legend of our sport. Just to be mentioned alongside of him is a great honor for me. Just to be on that list, period, knowing where I’ve come from and where I’m at now. The way we fought through all the adversity as a team to get back to winning races feels like a real accomplishment. You have to go through things like that to be amongst those great. They went through a lot of turmoil in their time, and I guess when you get that many wins, you’re going to go through some yourself. So, I’m fortunate even to be mentioned with Joe, let alone to be able to tie him.”

Brown is one elimination round-win from becoming only the sixth driver in NHRA history to hit the 750 plateau. He closed the book on Atlanta Dragway history with the distinction of claiming more Top Fuel victories—five—than any other racer at “Georgia’s House of Speed.” It was his seventh at the venue, counting his two in Pro Stock Motorcycle.

“Atlanta has just been so special to all of us,” he said after improving his record against Torrence in final-round pairings to 7-5. 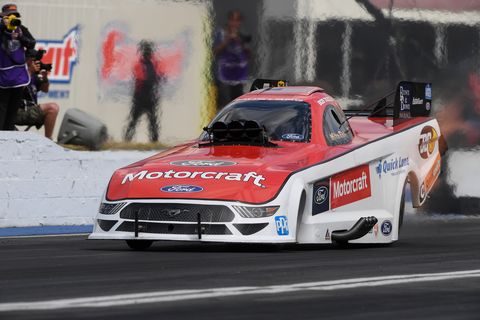 Funny Car’s Bob Tasca claimed his second straight trophy, and for him personally, the three-thousandths-of-a-second victory over John Force was a classic. Their relationship started at the dinner table of the Rhode Islander’s grandmother. “Noni Jo Tasca,” who passed away in March on the eve of this season’s opener at age 96, was the consummate Italian cook, and Force thought her meals—and her regal presence in a tight family that he admired and desired—were as magic as his best-performing Funny Car. And Force said she prayed for him to win races.

Ultimately, it was the wisdom and helping hand with the Ford Motor Company from Noni Jo’s husband, Bob Tasca Sr., that propelled Force’s career into overdrive. Force became a part of the extended Tasca family, soaking in all the business advice from the man he fondly called “Grandpa Tasca.” But Force helped the Tascas, too.

At a barbecue and John Force personal appearance at the Tasca Ford dealership circa 2005-2006, almost 20,000 people showed up. Tasca III said his company served 36,000 soft drinks, 26,000 hot dogs, 750 pounds of Italian sausage, and 1,000 pounds of hamburgers. Tasca III said at the time, “We didn’t sell any cars that weekend because we were busy with the event. But the following weekend, we sold twice what we normally sell, and sales have increased ever since. It put us on the map with a new, younger generation that we have not seen since the ’60s. We’re selling cars to a new demographic segment that we were missing.”

But Force since has left Ford and reunited with Chevrolet, and Bob Tasca III has become more of a rival than a rising-star ally in the Funny Car class. But the respect and the depth of appreciation for one another remains. And that was evident Sunday, miles and years away from those memories.

As he held his eighth trophy, Tasca III praised his 151-time-winner, 16-time champion opponent, a man he called “the gold standard” in drag racing and “a living legend”: “There’s nobody that’s done it better than Force over the years. It’s an honor to roll up next to him. There’s no one I get up more [to race] than John Force to beat him in the final.”

“It’s taken me a long time to get here in my career. A lot of hard years, lot of hard years,” Tasca said to Competition Plus after scoring his second back-to-back winning performance. [He did the same at Bristol, Tenn., and Norwalk, Ohio, in 2019.] “We had a great car, you got a great team, but you know something? You got a long season, and we look at it at one round at a time. We’re confident but not cocky, because any one of those rounds we could have lost by a fraction of a second.

“It’s almost emotional for me a little bit, because it all comes down to people. You’ve got to surround yourself with the right people,” he said. “I’ve had a lot of great people over the years, but with (crew chief) Mike Neff coming on board with Jon Schaffer, for whatever reason, it just kind of changed the whole attitude of the program.”

But Tasca wasn’t as sentimental toward the racetrack that had hosted the Southern Nationals for 40 years. He said to the packed stands and the TV audience, “Start the bulldozers up and tear it down!”

Force advanced to the finals at Atlanta Dragway for the first time since he faced—and lost to—his now-retired daughter Ashley Force-Hood in 2008. That was her first victory and the first Funny Car victory for a woman.

So we’re going to celebrate a little bit tonight, and we’ll get ready for Charlotte.”

Just to think it was three years ago when Tasca convinced Ford to return to drag racing with the promise of delivering wins.

“It’s taken me a long time to get here in my career,” Tasca said. “A lot of hard years, lot of hard years. It’s almost emotional for me a little bit because it all comes down to people. You’ve got to surround yourself with the right people. I’ve had a lot of great people over the years, but with Mike Neff coming on board with John Schaffer, for whatever reason, it just kind of changed the whole attitude of the program.” 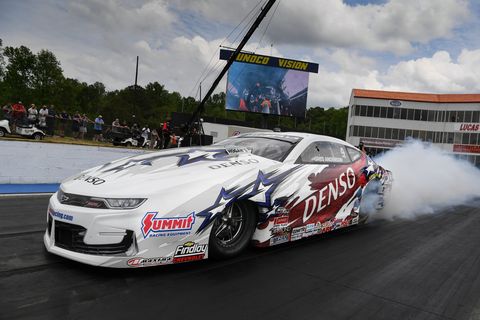 Greg Anderson had hoped former mentor and longtime rival Warren Johnson would come back to the Pro Stock class for one last fling at the track just 30 miles from his home. But Johnson wasn’t interested unless a payload of $1,000 bills fell from the sky. If Anderson were going to pull within one victory of tying Johnson to share the class’ all-time record of 97, he would have to do it without the keen competition from Johnson. And that’s just what he did Sunday.

In Pro Stock Motorcycle, Scotty Pollacheck earned his second victory and first of the year, at the expense of red-lighting team boss Matt Smith.

Next up for the Camping World Drag Racing Series is the last of two four-wide events for the season, the May 14-16 NGK NTK Nationals at zMAX Dragway at Concord, N.C.