The fit was comfortable right from the beginning and their size recommendations were spot on for me.

BHPian adwaith recently shared this with other enthusiasts.

This has been a tad overdue but I’ve finally got to it. I’ve been looking to buy Orazo’s riding boots ever since I heard about them on BuluBiker’s YouTube channel. As with everything else I had been putting it away for quite a while but a sale came up this was when I was nursing my back injury and I decided to procrastinate further. I even made enquiries as to the differences in the range they were offering at the time but it was only differences in colour and I was also told that their boots were only water-resistant.

Recently, Orazo launched their line of waterproof riding boots with an introductory discount of 15%. I decided to buy one pair of the “Cocoa Ibis” boots. Now I have to mention I don’t really have a reason why I bought the long boots, but that’s what I did.

I placed the order on the last day of the sale and the boots arrived about 6 days later via Speed Post. 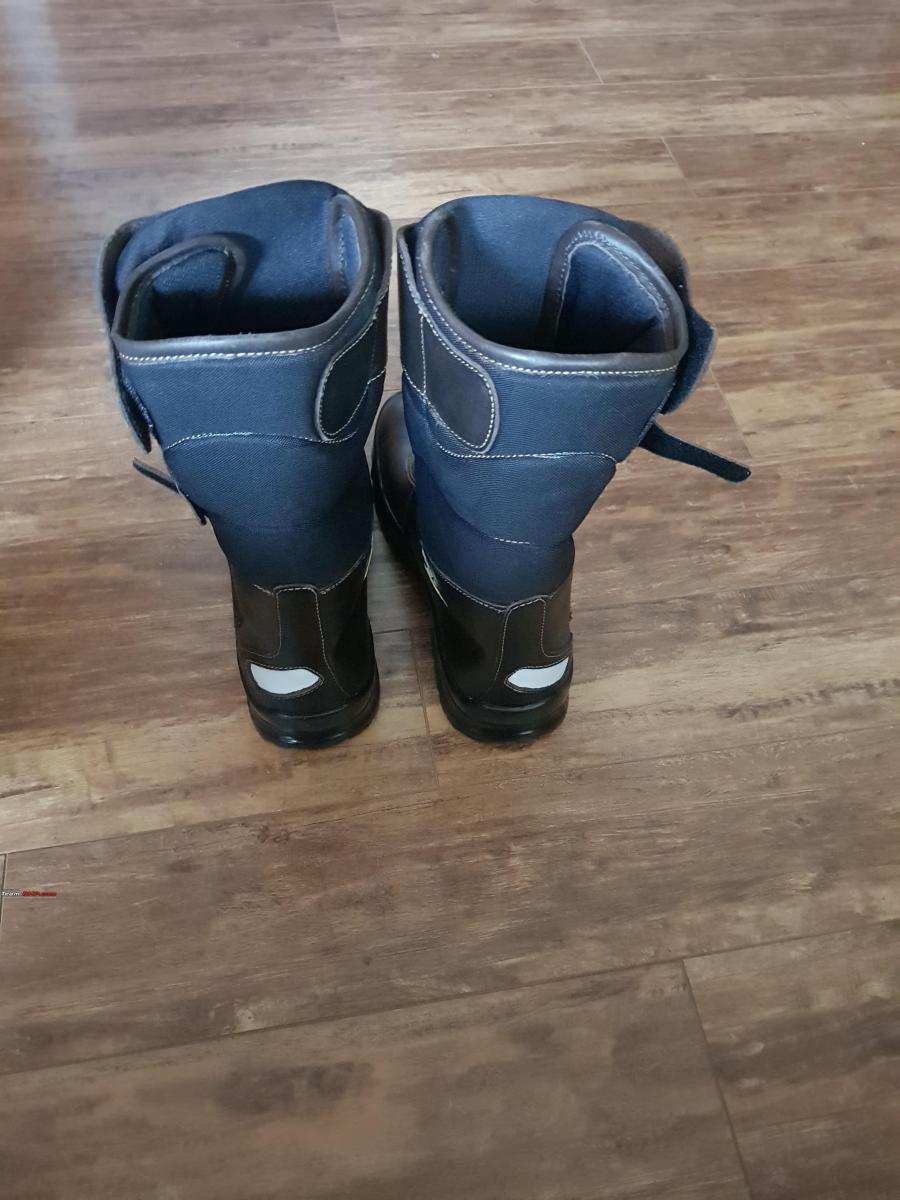 I tried them on immediately (Orazo have a policy that any defects or issues must be reported on the day of delivery), and they felt good around my feet but I have never worn boots so long before and so it was quite weird around my calves. Walking with it, initially, I felt like one of those astronauts walking on the moon.

As soon as I got on the bike, I could feel the boots slip on the foot pegs, which made me a little wary but the grip on the ground is solid. It helps me manage my Interceptor’s weight with much greater ease than I have ever been able to before.

Brand new, the boots weren’t as pliable as I would have liked for them to be. The boots are quite big and it felt rather uncomfortable around the gear pedal, especially shifting up and I could feel the entire bulk of the boot move around while shifting. One thing I found rather annoying at the beginning was that the bike kept falling into neutral when I tried to shift between 1 and 3 because I wasn’t used to the feel.

About 24 kilometres into the ride, the boots became quite comfortable and I was able to ride as I usually do. I no longer felt that the boots were too big nor did I walk like I was on the moon.

The fit was comfortable right from the beginning and their size recommendations were spot on for me. The heel is supported well and in general, they’re quite comfortable to walk in and ride in as well.

The only thing bothering me is the marks on the left boot from shifting, which were obvious immediately, but I guess that’s not something I can avoid. I tried polishing but that did not make much of a difference.

There are also these slight kinks on the sides of the boots that have formed with use, which are more prominent on the left boot. They make no difference on the inside of the boot and they fit the same. Overall, I’m quite happy with my purchase and hope to travel long with them. Do let me know if you have any questions or suggestions.

Here’s what BHPian nitinkbhaskar had to say on the matter:

Orazo has been doing a great job at offering decent riding boots at a fair price.

On the shift marks part, try using a gear-level sock on your bike. That will ensure that your boots don’t get roughed up.

P.S: I have been using Orazo boots for more than 3 years and the shift marks are nothing to be worried about. They are due to a contact patch with the gear lever and that’s about it.

Here’s what BHPian sandeepmohan had to say on the matter:

I got my first pair at Rider Mania 2009. Wore them almost every day for 5 years till the sole finally crumbled to bits, as seen below. Mine had a steel toe. They are okay for riding. Not if you want to walk. The insoles are too hard. Perhaps they have improved on this. Also; I am not so sure if these are the best bet for an Interceptor. They are more suitable for motorcycles like a Harley or an Indian, where some effort is required to shift gears. These motorcycles have more space to park your foot too. I used them when I rode my 96′ Enfield 500. They were not suitable for my Duke 390. Anyway, they work for you.