Primary contenders were the Mahindra XUV 500, Chevrolet Captiva and the Mitsubishi Pajero Sport.

BHPian AdityaDeane recently shared this with other enthusiasts.

As a replacement for my Triber I was looking for a Tata Aria 4×4, but the time was increasing and I could not find a worthy example within my limited budget and leave constraints.

So, on 23rd of June I bought a Blue 2009 Maruti Suzuki A-Star ZXi MT from Maruti Suzuki True Value with roughly 64K on the odo. A Navy person driven car with all Service Records etc. 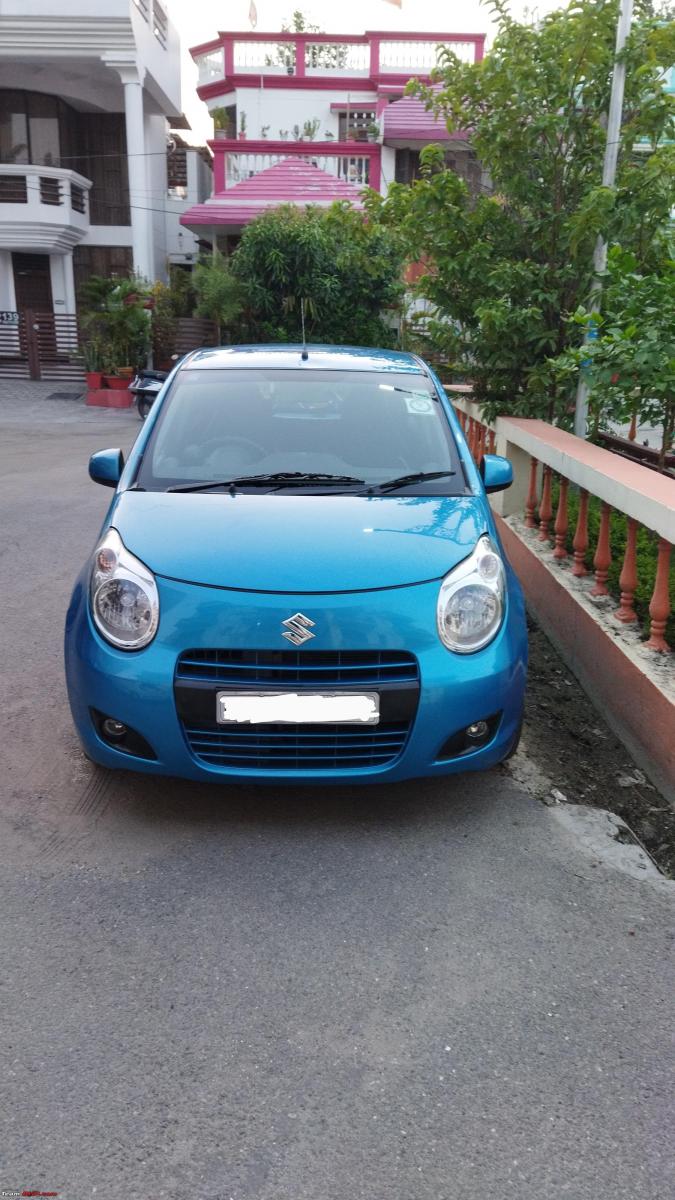 Finally, after a lot of search and bargaining, was able to find a decent 2011 Tata Aria Prestige 4×4 in Sardinia Red from Chandigarh Tricity region, and purchased it at a good price, with almost 1.14L kilometres on the odometer. Initial observations from my drive between Tricity to Manali:-

The primary reason for choosing an Aria was the flat folding seats for using the vehicle as a Campervan for nearby weekend trips, this was missing in the 60% seat of the Triber. The roof box storages are added bonus for keeping small items.

Have started to invest in the Aria these days! Here is the list of expenses till date:- Hence it was an immediate safety expense! So, ordered a set of 4 Ultramile UM 4×4 Bull A/T tires from Amazon.in at a discount on 27th August 2022, they will be delivered in the next 7-10 days. Hope they fare well, and give me a good grip in the snowy, rainy, slushy and highway conditions in which I will drive for the next few years.

The condition of the tyres can be seen in this post.

An immediate expense is the Coolant! Just noticed a few days back that it is below even the Minimum Level mark, have asked other Aria users for their recommendations here. If anyone reading the post has any recommendations for use in snowy regions, do post and let me know.

Got to do mild off-roading in the Aria this afternoon with BHP-ian @ringoism.

Here is what he had to say after the drive:

You’ve got a good and capable car there, bro.

Guys, I had the pleasure of test-driving it for maybe 45 minutes or so today. It’s smooth, quiet, has good enough power once the turbo spools, the Adapterra AWD really works, ground clearance workable, seats comfy, ride quality such that you can’t feel most potholes. No considerable rattles/ squeaks inside or knocks from the suspension below, so seems well put-together and in good mechanical condition. Needs the airbox tightened up and the tyres of course, but otherwise would seem ready to drive anywhere.

The sheer mass of the thing combined with the lack of torque below 1700rpm’s means that on steep gradients you’ve got to utilize some technique, half-clutching judiciously as possible. 1st gear is fairly low but not low enough to crawl with, 1700rpm shows about 17-18kmph so a bit of clutch-abuse is the only option in tricky stuff. That said, didn’t smell anything burning after that rocky climb and would figure that unless you’re doing this kind of thing daily, driver skill should pull it through most things without adverse effects on clutch life.

Came up over a big ledge where the pavement started again and was afraid of scraping /stalling, but it didn’t. Probably was close, gotta be a little careful sometimes.

A soft-roader, granted, but the AWD system really does grab the grip wherever it can, zero wheel slippage except when I revved it and dropped the clutch on sand (in which case I think all four spun!).

Had worried about the thick and very forward A-pillars and the sloping bonnet (I hate obstructed quarter visibility and like to be able to see my edges), but went through lots of turns and also some manuevering in very tight spots (apple truck traffic jam on the Palchan bypass) and a little surprisingly didn’t find either to be a problem.

FE showing as 12kmpl on the digi-display, which would be very respectable considering he drove mostly uphill for eight hours, then some local driving after, and after all that had me behind the wheel with my foot in it and lots of full-boost.

Let’s see how the tank-to-tank works out.

If I have a complaint it’s that the handling felt a little wallowy – not so wallowy like a Safari, CG definitely lower, but spring-rates certainly on the softer side, whereas I prefer more taut, control-biased suspensions. ‘Specially when throwing something this heavy around.

Secondly the ABS was scary to me on gravelly surfaces. Hoping that’s just the old tyres lacking grip, but I know ABS can be strongly biased towards keeping things straight rather than raw minimum stopping distance – and I think gravel/ sand is where ABS is at its worst. There are lots of situations where a firm grip on the wheel and some skidding can stop you shorter, had observed this way back when performance-testing ABS systems 20+ years ago in the U.S. Had hoped things had advanced since then but reality is that with ABS you have another brain taking over control, and it’s not a brain (except in a Tesla maybe) capable of recognizing that object looming in front of you and deciding you need to stop NOW, even if you end up sideways!

Service/ parts concerns may be legitimate, let’s see how that all pans out.

But otherwise… wow – seems a great car, especially considering how affordable they are nowadays.

Saffira – The huge, playful, protective, elegant and powerful dragon in the movie Eragon!

As per norm, I have named my latest acquisition as Saffira, it is a Sardinia Red Tata Aria Prestige 4×4 of the 2011 vintage. Like the dragon Saffira, in the movie Eragon, my Saffira is elegant, playful, powerful and protective.

Tata Motors developed the Aria crossover to take on the European markets, and also introduce a new breed of vehicles in the Indian market. It was spacious, built with latest European safety regulations in mind, shared many parts with the then Tata Safari, and yet was lighter and ultramodern for it’s time. It had features that were way ahead of the nearest competitors, but yet it failed big time in the Indian market. As the market wasn’t ready for a Tata costing north of 10 Lakhs, and priced above the ever successful Toyota Innova.

But, I always loved the Aria for the sheer practicality and space that was on offer. Whenever I would see one zoom past me, I would think if I would ever get to own one. So much so, that when I was planning to sell my Tata Nano, I tried to frantically search for a Tata Aria, but there were very few in the used market, and the prices were exorbitant and beyond my budget, so I decided to rather invest in a new Renault Triber, and that introduced me to the world of MPVs/MUVs, and I got hooked to the idea of flexible seating and big boot and creature comforts.

Then, Covid hit the world hard, and due to some financial struggles at home, I had to sell off my Renault Triber in April of 2022. It was a big shock for our family, and we still haven’t come out it. We decided that we will not buy a vehicle again, and will utilize Public Transport and Taxis for our needs, if and when they arise. But, the itch to own a personal car, and have the flexibility to drive out at a second’s instance kept poking me to keep looking for a good used car. My criteria was simple:

With these in mind, I kept searching on OLX and Droom and Quikr for hours everyday. Saw a few XUV500 AWDs, Chevrolet Captivas, Hyundai Tuscons, Honda C-RVs, Hyundai Santa Fes, Tata Safaris, Mitsubishi Pajeros and Tata Arias. But whenever I would finalize a vehicle and try to go buy it, something or the other came in between and the deal was off. Sometimes it was due to price negotiation, sometimes due to lack of leaves, sometimes due to the advice of my friends. Finally I grew tired, and bought a Maruti Suzuki A-Star in June 2022 from Maruti True Value in Dehradun, it is a good car and gives a good mileage but it is neither a 7 seater, nor 4×4/AWD/4WD, nor does it have a decent boot space. So, I immediately started regretting my decision to buy it and put it up on OLX (by the way, I’m still looking to find a new owner for this car on OLX).

But, my wife and I were constantly thinking and searching if only we could find a decently priced Tata Aria 4×4, it would make us happy. I was only interested in the Pride 4×4 model, due to 6 Airbags, ESP, TCS, Cruise Control etc., and never considered the base (Pleasure) or mid (Prestige) variants to be worth my time. As I was upgrading to a big vehicle, I wanted the top model, the best there was. As a matter of fact, all my previous rides had been top of the line models (Tata Nano Twist XT, Renault Triber RXZ and Maruti Suzuki A-Star ZXi ABS), and hence I wanted to continue with my streak of Blue cars and Top Models, but God had something else for me in His mind. I was getting impatient, the Tata Aria Pride’s in my budget were either 4×2 models, or not available in my nearby cities/towns/States, and hence I tried exploring all the available options near me.

Finally, in late July I found this Tata Aria Prestige 4×4 near Chandigarh on OLX. It was a 2011 model, and the current owner was the 3rd owner of the vehicle. He assured me that the vehicle had been bought by a firm, then transferred to the owner’s name, and finally was transferred to the 3rd owner, who happened to be their relative. So, it had been in the family for the last 11 years. He assured me that service history is available at Tata Motors Service Centres, and I can come and check the vehicle at any time. Finally, on 7th August 2022 I went to see the vehicle along with BHP-ian ‘anuragisaacrout’ and his wife, who are both avid auto enthusiasts, and own a Tata Safari themselves. We took the car for a test drive, checked for suspension noise, engine noise etc., and finally closed the deal as everything seemed genuine. The interiors do have some marks of abuse, but the leather upholstery has held up well, and so have the plastic interiors. Finally, I drove Saffira back home to Manali the same day.

Continue reading BHPian AdityaDeane’s review of his Aria for more insights and information.