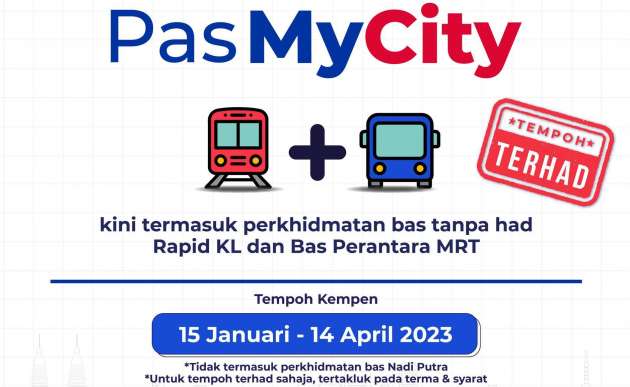 Rapid KL has announced that its MyCity 1-day and 3-day rail passes now include unlimited rides on Rapid KL buses and MRT feeder buses. This is from now till April 14, valid for the above-mentioned buses except for Nadi Putra buses.

This value added promo is in addition to the earlier announced Buy 1 Free 1 deal for the MyCity 3-Day Pass (MCP3), which gives the holder unlimited rides on the company’s rail and bus network for three days. The promo is open to Malaysian citizens who buy the MCP3 from now till February 28.

Upon purchase of the MCP3, one will need to scan a QR code available on ‘Thank You’ campaign posters at Rapid KL customer service offices or selected Rapid KL bus hubs. You will be redirected to the MyRapid Pulse app, where you’ll need to fill in your personal details on the campaign page.

If successful, you will receive a letter voucher for the free MCP3 in your registered email after the campaign period is over. The B1F1 deal is limited to the first 2,023 customers. You’ll also be entered in a lucky draw with prizes such as Aurum Theatre tickets to be won. Details here.