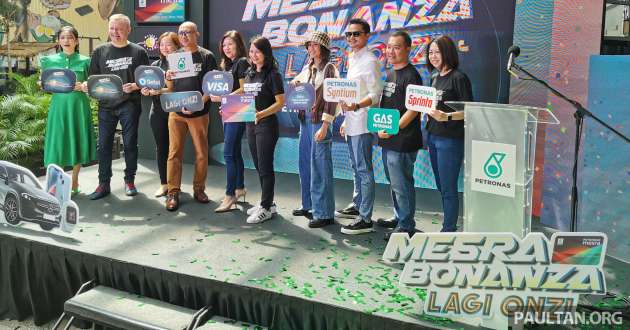 Petronas Dagangan Berhad (PDB) has launched the latest edition of its rewards campaign, dubbed the Mesra Bonanza Lagi Onz Campaign. This promises to be the easiest, most inclusive edition of its loyalty rewards campaign yet, and the prize pool is comprised of a fully electric vehicle, a scooter, smartphones and more.

“We are constantly in search of the best ways to delight our loyal customers. Today, we are excited to unveil Mesra Bonanza Lagi Onz, a no-frills, inclusive loyalty rewards campaign which we are certain will excite our customers, said PDB general manager of retail fuel Norazlan Subaha.

The Mesra Bonanza Lagi Onz loyalty rewards campaign will run for three months beginning today, November 1, 2022, until January 31, 2023 where prize winners will be rewarded monthly, and the grand prize up for grabs is one Mercedes-Benz EQA fully electric vehicle as the grand prize, while two second-prize winners will each win holiday vouchers worth RM15,000 at the conclusion of the rewards campaign.

To participate, Petronas customers who spend a minimum of RM40 of fuel at any Petronas station or RM10 in a retail transaction at a Kedai Mesra store in one receipt will be in the running for the monthly prize pool. Customers who spend a cumulative RM700 throughout the rewards campaign duration will be in the running to win the grand prize of the fully electric Mercedes-Benz EQA.

In addition, customers who pay for their purchases via the Setel mobile app can double their contest entries, while those who pay for their transactions with Visa debit or credit cards, or through CardTerus on the Setel app are entitled to quadruple their number of entries.

“We are pleased to partner with Petronas once again on the Mesra Bonanza Visa campaign. Our valued cardholders have the opportunity to walk away with a variety of prizes worth more than RM500,000 whenever they pay for their fuel and other purchases at Petronas using their Visa cards,” said Visa country manager for Malaysia Ng Kong Boon.