I just love the way the new generation Leon looks and it comes with the same 245 PS as Golf GTE does too.

BHPian baireshraj recently shared this with other enthusiasts.

Even though I have been a member of team BHP since quite some years, this is going to be my first thread. I will try to live up to the standards of the other fantastic threads out there.

I have been working in the automotive industry since 2011 and know a thing or two about cars. My last job was all about developing petrol engines for one well-known German premium brand. As a calibration engineer I did get chance to drive and develop all kinds of automobiles under the VWAG umbrella. As my daily job was to drive around in well-equipped and powerful cars, it never occurred to me to buy one for myself, until now. I recently moved to another job, more of a managerial one and the craving for driving around started again. When I was itching to get one for myself, came corona and along with it the lockdown. My previous employer strictly prohibits me from writing on public forums and I did not want to do so under a pseudo name. With this change in job and newfound time, it was a no brainer to pen down this experience.

With WFH, I did not really need a car. If I did want to go out for a spin, I would rent some fancy car over the weekend and have fun on the German autobahn. However, sometimes you don’t need a reason to get something for yourself, do you?

Note: The new German government has proposed to limit the speed on Autobahn to 130 kmph. So anyone who wants to have the experience of driving on unrestricted public highways, plan your trips.

A fellow Indian colleague of mine here in Germany and I decided one fine day to take the plunge (back in early 2020). We were then contemplating whether to buy an EV or a traditional IC engine and should we buy or lease. We had tons of questions and decided to sort them all out.

After enough research, I decided not to buy an EV just yet for the following reasons:

I do not have my own garage here in Germany and live on a high rise. Oops – There goes my option to charge at home

I do not want to rely only on public charges and chargers at my work place. Most of the chargers are always in use. You should see the sales number of EV and PHEV in Germany. It is skyrocketing but the charging infra is yet to catch up.

I also decided against diesel for obvious reasons. Many German city councils also have a “Dieselfahrverbot”, loosely translating to No entry to Diesel vehicles inside city limits.

Having considered everything, it was a no brainer to get myself a Petrol PHEV for now and decided to lease one for 2 years. This will give me an EV experience albeit as a Hybrid, prepping me for my next buy – which will be an EV for sure. As a true petrol head, it is difficult to choose EV over an ICE, but EVs are tons of fun. You need to drive one to believe me – the quick acceleration and vibration less experience is a bliss, especially in city. After driving around in EVs, even the fastest of DCTs will feel like an eternity. I also strongly believe the second generation EVs coming out post 2024 will have many issues ironed out – For example the infotainment system, quality of interiors of current ID models from VW

I then started looking out for PHEV leasing offers. It was during this time VW launched their Golf GTE. It has around 245 PS when the battery is fully charged and comes with a 1.4 engine producing 150 PS that is mated to a 6 Speed DSG with an supplementary electric motor producing 110 PS. However, this configuration like most others is shared across the VWAG brands (Skoda, Seat, Audi). This configuration is available in two power outputs, either as 245 or 200 PS. I was sold on the configuration even though it had a few cons. More on these later

Insight in to the German Automotive Industry

All car manufacturers had to decrease their CAFE (Corporate average fuel efficiency) and their pool CO2 emissions in 2020 and beyond or else they would have had to pay huge fines to EU government (running into billions of Euros). Everyone in EU like the rest of world bitten by the SUV bug where buying big SUVs with powerful petrol engines. Small technical insight: Diesels emit lower CO2 and higher NOx, petrol other way around. Since diesel has fallen out of favour, manufacturers were finding it more than difficult to meet the CO2 pool emission target with higher petrol engine sales share. To offset this problem, all manufacturers were forced to launch lightweight hatchbacks with hybrid setups. Even though the hybrids are not eco-friendly, the official tests done on the NEDC/WLTP test cycles say so. A golf GTE is certified to emit only 38 g of CO2/km but the Golf GTI with the same 245 PS power emits 157 g/km. Manufacturers were pushing and marketing these hybrid cars heavily and were giving them away for huge discounts just to avoid paying fines. The German government on its part was giving € 4,500 back to customers opting for a hybrid car and wavering Tax for the first 5 years. Icing on the cake. Best time to be in the market to get a hybrid car.

Some of the offers where unbelievable. A Mk 8 Golf GTE was available for 109 Euros per month for leasing duration of 2 years with an allowed 10,000 km per year. Like me, everyone wanted to get one and unfortunately, I could not secure a car. Some dealers apologised and told me they could not handle huge number of enquiries coming in. Moreover, I was not a great fan on how the Mk 8 Golf looks and more so hated its infotainment system.

Not a fan of Mk8. I prefer the previous generation I kept looking and that is when I came across Cupra and their recently launched Leon. I did read about the Cupra brand in the news but thought to myself, this might be another trick from VWAG to introduce another brand to ship out more cars. Man I was so wrong.

For the uninitiated Seat started as a state owned spanish company and was bought over by VWAG in the mid-80s (like many other European brands). They were making some not so good-looking cars in the past to now some of the best-looking budget cars within the VW umbrella alongside Skoda – my personal opinion.

Example 1 of not so good looking Seat: 2nd gen Leon

Example 2 of not so good looking Seat: 3rd gen Toledo

Seat also has a CUPRA division (loosely standing for CUP RAcing), similar on the lines of AMG/M etc. In the past, all top end line cars of the Seat were sold as Cupra edition. Now all of a sudden Cupra is its own brand. Their first standalone car was Forementor – all others cars were badge engineering with Seat. This car was a huge success – both customers and the critics loved it alike and gave huge thumps up.

I really like the Matt finish on Cupra cars along with the copper brand color. Below is the Formentor Formentor and the funky looking logo did the trick, and within no time Cupra as a standalone brand was selling more than Alfa Romeo – VW always had grudge against Alfa as they tried and failed to acquire it. VW took a dig in their annual conference by benchmarking Cupra against Alfa. VW has further announced that Cupra brand will be EV only brand going forward.

Fun fact: Every Seat car is named after a place in Spain

I decided on the Curpa Leon hybrid as I wasn’t fan of SUVs. I just love the way the new generation Leon looks and on top comes with the same 245 PS as Golf GTE. The vehicle configurator website was not even up and running in Germany, but I was sold on the car already. I came across some wonderful offers and pounced on some once they were published in some leading leasing websites in Germany. Some offers were a steal and only 50 cars were part of the 1st lot.

Details on the offer:

Mailed the dealer and called him couple of times to get in line and luckily got one allocated.

Since the website configurator was not available, I could not play around a lot and chose only some additional features as the car was already packed with features. I booked the car on the 30th of October 2020 and the wait began – a long wait indeed. The dealer told me it would take at least 8 months to deliver since the car was just officially launched in Germany and initial production started in Spain.

In the meantime, I would just watch the YouTube reviews and blogs and wait for the call from dealer. I was okay to wait even longer since there was no urgent need and the deal was worth the wait.

Fast forward to June 2021, I got the much-awaited call from the dealer that the car was shipped and I can take delivery in the last week. In the meantime, I had to go through the famous German bureaucracy to get the car registered. That warrants its own thread. Let us save it for another day. Registration, insurance and all done, it was time to get my hands on it.

Here it is in all glory Rear three quarter view is the best place to admire the car. I love how the strong shoulder line connects to the rear and front Rear has a running brake light across the length. One main reason for white as a color of choice is to highlight this Notice the Quad exhaust. Ahem ahem, they are actually fake and the diffuser are just for looks The front has a soft nevertheless also a menacing look. Matured Seat grille from previous generation Two strong creases on the bonnet brings your attention to the logo. Notice the ADAS sensors neatly positioned below the number plate Out in the internet, this CUPRA logo has lovers and haters. Many call it childish but I personally like it. And yeah you can notice the touch of the copper colour everywhere. Notice the carbon figure(ish) background in the rear logo 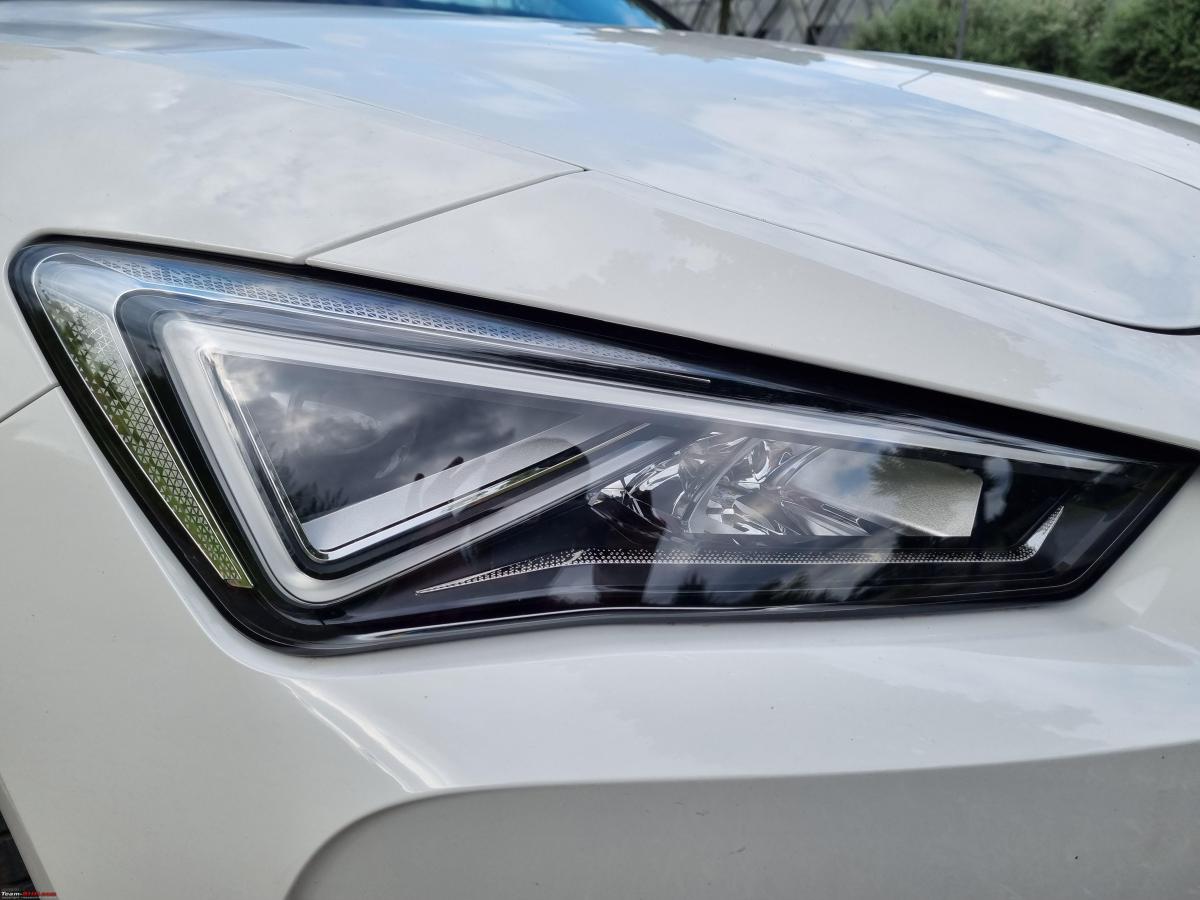 It is definitely not a small car at 4400 mm. Even though based on the latest MQB platform, wheelbase is 68 mm more than VW Golf Mk8 R19 alloy wheels quite a looker. But ride is compromised on some bad roads and Yes before you ask, we do have bad roads in Germany. The alloys can easily scrape when parking next to a pavement. You have to be on high alert. 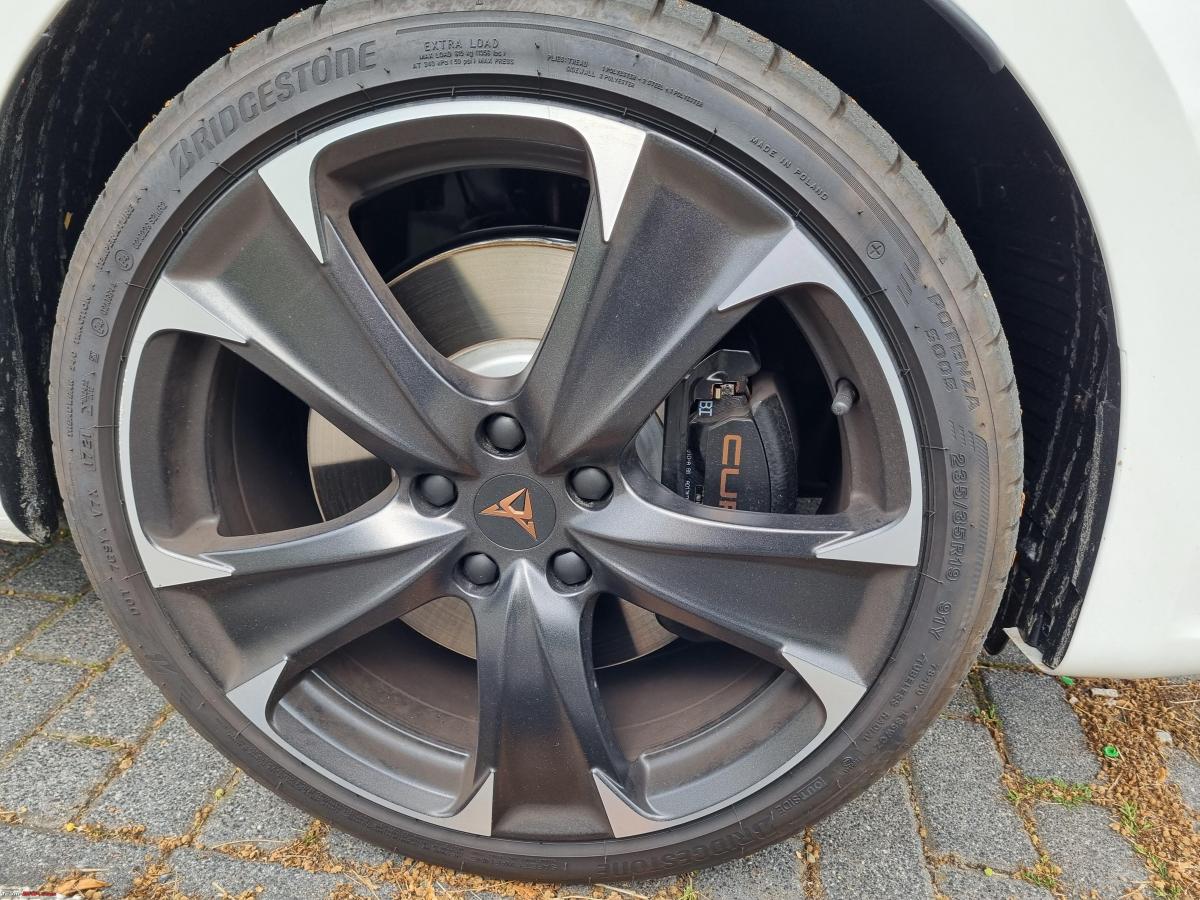 Buying another set of winter tires, which is required by law here in Germany, can set you back a bit. I did get Hankook for winter and the stock summer are from Bridgestone. Nothing special about the brakes, they do the business. But the regenerative braking is no joke and adds to the range especially in city. Unfortunately the regenerative level cannot be adjusted. Fuel tank on the rear right and the charging port located at front left. Many times after charging, I forget to close this one, busy removing the cable. Manufacturers should indicate on the dash board if the charging port in open. Some shots in the night

Car greets you eveytime when you unlock with this dance. I love it. It makes you look the car everytime you lock and unlock In action during the dark