Well, that’s definitely not a Schwinn. One wayward Colorado driver took a very wrong turn in a Nissan Rogue sometime between Wednesday night and Thursday morning, wedging the car into a bike path near the South Platte River. Denver police later responded to a call about the crossover, looking like a beached whale while taking up a turn that was too sharp to ever make. That wasn’t until after it blocked the commute for some locals that were less than enthused about the mishap, though.

The question is, how did it end up there in the first place? Some speculate there were illicit substances involved, but at this point, no one knows. Possible explanations include:

On a more serious note, it’s not like it’s easy to just end up on a narrow trail like this. You’ve got to really try to screw up, but then again, we’ve seen worse in 2020. 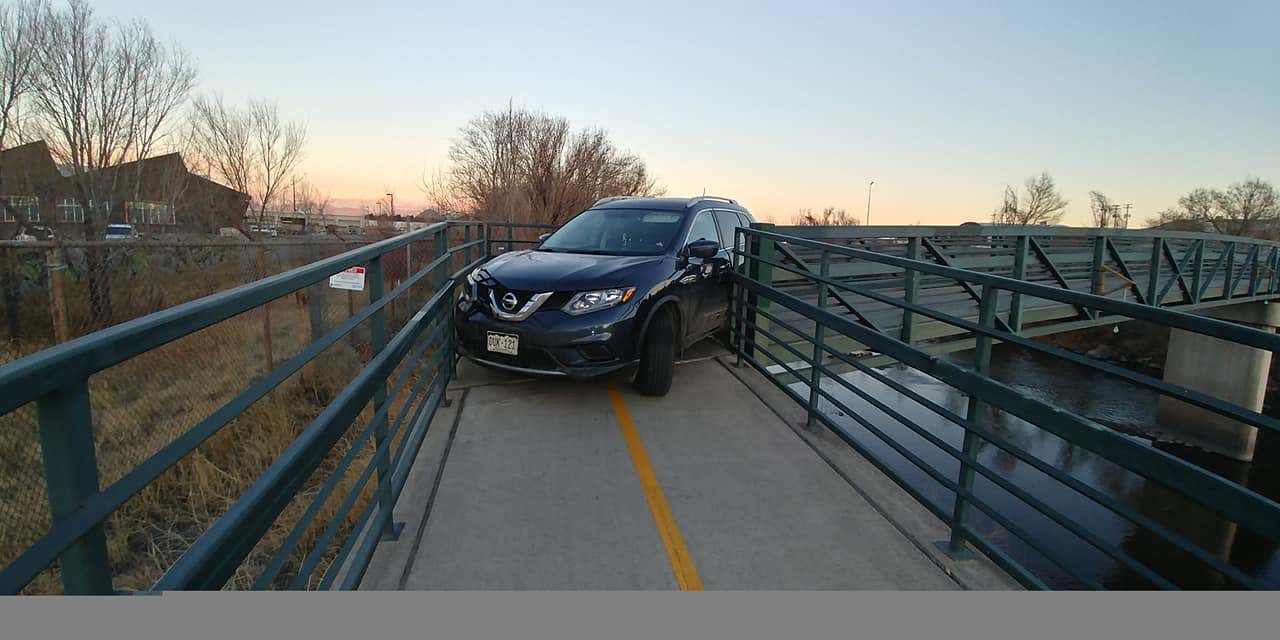 In Colorado, they take their cycling trails seriously, and this did not go over well with the community. Trails are scenic, gorgeous, and the best way to skip out on an early-morning carpool trip. None of them need a rogue…um…Rogue smack in the middle for decoration.

“I take this path every day commuting to work,” said cyclist Dan Catanzaro, who posted photos of the incident on Facebook, to The Drive “Looks like the car was stolen. And I had to climb over it with my bike on my shoulder. I didn’t want to be late for work.”

According to Denver 7 News, the car has already been retrieved. As for how they got it out, it’s anyone’s guess—I wish we had footage of the tow truck.

“I’m sure towing it out was pretty tough,” Catanzaro mentioned. “There isn’t much room; they might have had to winch it out. It definitely made my morning interesting.”

Regardless, you definitely couldn’t handle this trail in your 4×4. Want to prove me wrong? I’ll hold your beer.

Related posts:
Tesla Applies New Model 3 Features To Model Y
Revamped 2021 NASCAR Truck Series schedule includes Knoxville
Best News
Alonso gets FIA approval to take part in F1 Abu Dhabi test
12/02/2020
FBI: No crime committed as ‘noose’ rope was there in 2019
06/23/2020
Why VW Pulled The Plug On A 400bhp VR6 Arteon R
06/23/2020
2021 Kia Grand Carnival breaks cover – solid looker! – paultan.org
06/24/2020
New Volkswagen Arteon Shooting Brake arrives as part of facelifted line-up
06/24/2020
Recent Posts
This website uses cookies to improve your user experience and to provide you with advertisements that are relevant to your interests. By continuing to browse the site you are agreeing to our use of cookies.Ok