NHRA dragster-driving rookie Josh Hart didn’t wear a top hat and tailcoat but rather a helmet and a firesuit. He didn’t even use cards, coins, or handkerchiefs.

But like in a stage production that left the audience slack-jawed with surprise and wondering, “How did he do that?!” he pulled a Top Fuel victory from his hat in March at the season-opening Gatornationals in Gainesville, Fla.

With no misdirection, no deception, no illusions, no tricks, and nary a fancy flourish from the quiet and humble 37-year-old businessman from Ocala, Fla., NHRA Camping World Drag Racing Series fans saw Hart defy expectations, deliver the seemingly impossible. He became the first driver in 20 years to win his first pro race and only the fourth since 1990 to earn the distinction. The others were Darrell Russell in 2001, following fellow Top Fueler Gary Scelzi in 1997 and Funny Car’s K.C. Spurlock in 1990.

Hart then took his touring magic show on the road throughout the Southeast, to Atlanta and Charlotte. At those stops, he qualified fourth in the 16-car fields, advanced to the quarterfinal at Atlanta, and reached the final round at Charlotte.

Hart credits crew chief Ron Douglas and his able assistants on the Burnyzz/Technet Dragster with the sleight-of-hand skills that weave the wonder.

“Our Technet team, they’re truly magicians,” Hart said. “They’re the real people behind the car. The driver hits the gas and holds on for four seconds. Ron Douglas is the man, the brains of the operation.”

Whether it’s Douglas’ mechanical technique or Hart’s uncanny skills behind the wheel (and, as team owner, concocting the perfect mix of talent), the result is entertaining. Hart has been to the final round at two of his first three appearances in Top Fuel.

And that’s a special art that Hart hopes to continue as the tour heads west to Houston Raceway Park, at Baytown, Texas, March 22-23 for the Mopar Express Lane SpringNationals. Qualifying will be limited to two Saturday sessions, with eliminations Sunday.

Hart simply says he is “very blessed” to have amazed everyone right out of the gate in his rookie year.

“I think that everybody deserves an award that even shows up to these events. That’s like a story by itself,” he said.

But he knows he won’t get something for nothing.

Curiously, he said racing in non-traditional four-wide format twice in his first three appearances didn’t mess with his rhythm.

“Actually, you know, it didn’t bother me too much,” Hart said. “I really took my time in staging, especially in qualifying. I didn’t worry about my lights in qualifying. I just sat there and paid very close attention, studying everything. When it was time to go into competition, I felt I was ready.

“The team gave me a really consistent car, which has kind of been our standard operating procedure. They’re a bunch of magicians. So you make sure you have a comfortable seat. I’ve just got to do my job on the lights. In qualifying, I didn’t pay too much attention to that. I just kind of studied everybody’s staging procedures, then I did my own thing and in competition I was ready to rock.”

“They’re a bunch of magicians.”

He’s ready to rock. And so are points leader and two-time 2021 winner Steve Torrence, Atlanta victor Antron Brown with a 10-3 record this season, slow-starting Leah Pruett itching to impress her sponsors and race sponsors, record-setting Brittany Force seeking her first victory since sitting out most of 2020, and Doug Kalitta eyeing a fourth Houston triumph.

In Funny Car, Matt Hagan (carrying the race-sponsor livery this weekend) and Ron Capps will try to put Don Schumacher Racing in the winners circle for the first time since sweeping all 11 races last year. They’ll battle 152-time and most recent winner John Force and his colleague and company president Robert Hight, who is winless in the past 18 races, since Oct. 2019.

Houston hometown favorite Erica Enders, the four-time and current Pro Stock champion, is frustrated with her season, despite winning the Las Vegas four-wide event and ranking no worse than second in the standings. 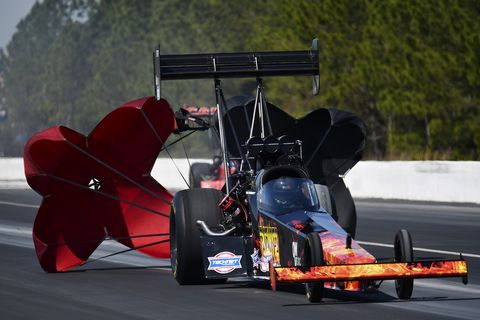 “It has not been the start we were hoping for, and we’re working hard to get our act together, myself included,” the Enders said. “I’ve lost on two holeshots this year (when her elapsed time was quicker than the winner’s), and that shouldn’t have happened. Every round matters, and you’ve got to fight every time out there. I haven’t shown that on reaction time, and we haven’t shown that on performance. I’m thankful for my team’s positive attitude, and we’re heading in the right direction after Monday’s test session. We were all mad about losing in Charlotte, and I know I’m going to race with a different mentality.”

Top Fuel’s Pruett and Pro Stock’s Stanfield will have double-duty, also racing in the Factory Stock Showdown. Class sponsor Classic Aviation is introducing its bounty program. A “bounty” is placed on the head of the previous event winner. Stanfield won at Gainesville, so he’ll be hunted by the rest of the field. If a competitor is able to beat Stanfield this weekend, he/she will receive a $1,000 prize. But if Stanfield wins, his bounty rises to $2,000