Home » Auto News » NHRA Has Brainerd In The Books, U.S. Nationals On Tap

NHRA Has Brainerd In The Books, U.S. Nationals On Tap

First, though, they must get the U.S. Nationals in the books in two weeks at Indianapolis.

That didn’t stop Hagan, who defeated Cruz Pedregon Sunday, from saying, “I can’t wait to get to Indy. Let’s go today!”

Torrence, the points leader after every race but the first this season, takes confidence in his seven triumphs in 12 completed events, but he knows his huge advantage will be taken from him following the Labor Day weekend classic at Indianapolis, when the NHRA rests the points to tighten the chase.

An outspoken critic of the playoff format, Torrence has resigned himself to the fact that “it is what it is.” He said the points adjustment “gives more teams a shot at the championship, I guess, and that’s what they’re going for. We can’t change that. All we can do is go out and do our job. If you win the races, the points will take care of themselves.”

They did Sunday, as they have done virtually all year. Torrence will take a hard-earned but rendered-relatively-meaningless 383-point cushion (which represents about 19 eliminations rounds) into the final race of the so-called “regular season.”

Unlike in the Top Fuel class, no one has locked in the No. 1 Countdown seeding in the Funny Car category. But Hagan and his Brainerd semifinal victim, Bob Tasca III, scrambled the standings again. Hagan took the points lead from Topeka winner John Force, and Tasca – who had led virtually all season long until two races ago – vaulted back into contention, tied with JR Todd for second place. The top five racers in Funny Car – Hagan, Tasca, Todd, Force, and Ron Capps – are separated by a maximum of 25 points heading into Indianapolis.

But the Lucas Oil Nationals, back this weekend at Brainerd after the 2020 edition of the event was canceled because of COVID restrictions, provided plenty of its own excitement.

Torrence Can’t Stop Himself From Winning At Brainerd 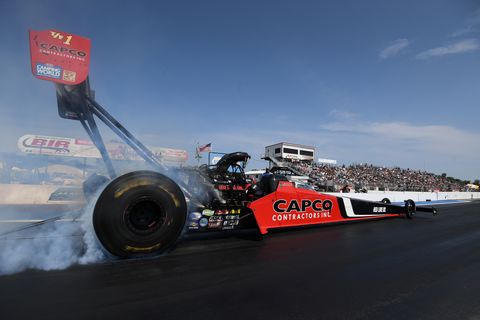 Several times Sunday, Top Fuel winner Steve Torrence said only half-jokingly, “I did everything possible to screw it up.”

But ultimately, the Capco Contractors Dragster driver said, “The Good Lord’s looking after my butt,” as he finally claimed a victory at Brainerd International Raceway, the last racetrack on the Camping World Series tour at which he hadn’t won before.

“I just remember dreaming of winning one race. And to be here and have the accomplishments that we have is nothing short of the glory of God and the Capco boys, and my mom and dad supporting us, my wife, and my little girl, Charli. I think she’s my good-luck charm,” Torrence said.

He completed the achievement by outrunning Clay Millican to win by merely .0170 of a second, or about eight feet for his 47th overall victory. He has won more than 40 percent of the races he has entered since April of 2017 (39 of 89).

Torrence said what he’ll remember from Sunday is “that I did everything possible to screw it up all the way to the final, and I finally got my head out of my butt and drove my race car, because that was a heck of a race against Clay. Those guys are coming on strong right now. Couldn’t be more proud of that team. But these Capco boys continue to just save me when I need it. I help them when they need it. We’re at the front and we’re staying there. It’s just a blessing to be here. I mean, the Good Lord looks after us and blesses us tremendously, and to have this opportunity is truly special.” 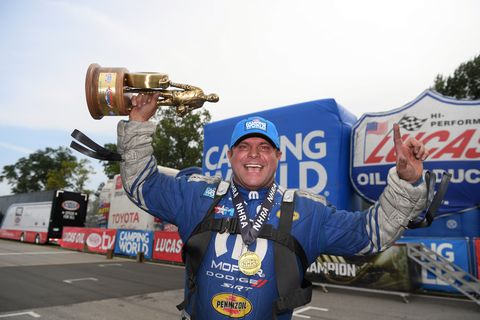 Three-time and current Funny Car champion Matt Hagan has won twice in the past five events, but he was so excited that he seemed to be a first-time winner. And he credited his Dickie Venables-led team, the racing surface, the NHRA track-prep workers, and the fans at this facility who are renowned for “The Zoo,” an on-site campground that has a wild-and-crazy reputation.

“This is one of the most humbling sports I’ve been involved in. You can do it all right and still get it wrong and pack all your stuff up,” he said. But that wasn’t the case for him Sunday.

“I’m just really proud of my guys. They’re really gelling well. We had three or four new guys this year, and for them to come in and make these 30-40 minute turns like this and get the car fired up and back up here and put a great race car underneath me-“ Hagan said.

“But how about this racetrack? I mean, it was a great show for our fans. The Brainerd track is amazing, to be able to lay down those numbers out here with the sun out like that. Hat’s off to NHRA for gluing the hell out of this thing so we put on a show,” the Mopar Dodge driver for Don Schumacher Racing said.

“I just love seeing all these fans out here. Biggest thing for me was doing a burnout every run and just being able to look up and see all these fans in the stands. It really does give me chill bumps. I mean, I love it and it’s awesome to see all you guys out here supporting what we do and supporting our sponsors and just coming out having a good time and living life again. We love you guys,” Hagan said. “Thanks for all you do . . to come out here and spend your hard-earned money to come out and see a show. And that’s what we are. We’re showmen. We’re here to put on a great show for these fans, and I think we did that today.”

He said, “We’re just now kind of starting to click at the right time of the year with the Countdown coming up. I’m just in awe. I know Cruz was going to be tough. He’s a good leaver, but I was just so confident in my guys and the car they’ve been putting under me all weekend.” 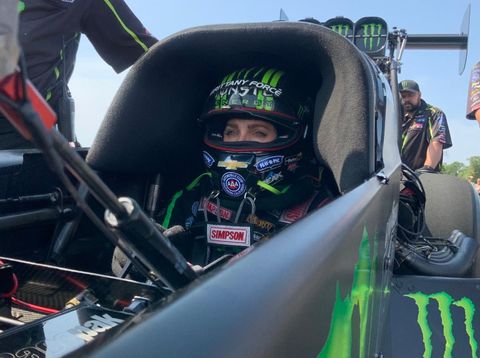 Brittany Force failed Sunday in her bid for back-to-back Top Fuel victories, losing in the semifinals to Clay Millican in a rematch of their Topeka final a week before. But she recorded some stout numbers for the weekend.

The Monster Energy Dragster driver set low elapsed time of the meet in the second round of eliminations at 3.672 seconds on the 1,000-foot course. In qualifying No. 1 Saturday, she posted a track-record 334.98-mph speed that is the eight-fastest in class history. She owns six of the top eight speeds in Top Fuel’s 1,000-foot era.

Tim Wilkerson made the highlight reels the previous weekend at Topeka for crashing into fellow Funny Car racer Cruz Pedregon during qualifying. One week later, he made news for the right reason.

Wilkerson bowed out in the second round of eliminations, Tasca in the semifinals.

Pro Stock, Bikes Take Break, As Other Classes Show Off 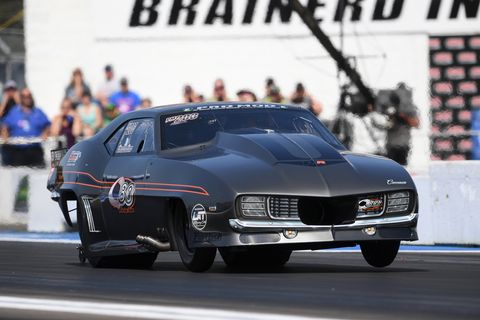 The Pro Stock and Pro Stock Motorcycles were not on this weekend’s schedule but will resume action at Indianapolis in two weeks. Filling out the agenda were the Pro Modified and Mountain Motor Pro Stock classes.

José Gonzalez’s wire-to-wire Pro Modified victory was an international collaboration. Gonzalez, a/k/a “El General,” is a Dominican Republic businessman who races out of Eric Dillard’s ProLine shop in suburban Atlanta, and his Steve Petty-tuned ’17 Camaro was shipped to the U.S. recently from Kuwait. Gonzalez defeated Brandon Snider in the final round.

Final finish order (1-16) at the 39th annual Lucas Oil NHRA Nationals at Brainerd International Raceway. The race is the 12th of 20 events in the NHRA Camping World Drag Racing Series.

BRAINERD, Minn. — Sunday’s final results from the 39th annual Lucas Oil NHRA Nationals at Brainerd International Raceway. The race is the 12th of 20 in the NHRA Camping World