My Dad’s Bajaj Chetak scooter: A journey of 25 years & counting

The Chetak served my Dad very well for over a decade till his usage of the scooter reduced as he turned 60. This meant the scooter was very sparingly used and soon after, had it’s mid-life crisis.

BHPian arun1100 recently shared this with other enthusiasts.

The Journey of 25 years of Dad’s Bajaj Chetak:

A Bajaj scooter was the most common two wheeler seen on Indian roads for about four decades until Bajaj decided to focus on motorcycles and Honda took over the mass commuter segment with the Honda Activa. In the year 1997, just when Dad turned 50, there was a need for him to own a scooter and the Bajaj Chetak was the obvious choice. The Bajaj Chetak was chosen over Kinetic Honda and LML Select.

Taking this pic was a task as I had to plan for all the family members and the scooter to be at one place.

This year was special. Scooter turned 25, parents’ 50 years of marriage and Dad is now 75: This was Dad’s second two wheeler after the RE Bullet which he bought in 1971. Story of this Bullet is here.

Highlights of the scooter: Some gyaan from Bajaj on genuine spares: Hibernation and resurrection in 2019:

The Chetak served my Dad very well for over a decade till and his usage of the scooter reduced as he turned 60. This meant the scooter was very sparingly used and soon after had it’s mid-life crisis. During it’s hibernation days, we had parked the scooter in our house compound. Unfortunately, during the construction of our home, the workers didn’t notice the scooter parked nearby and lots of cement fell all over the scooter during the wall plastering. It was too late when I noticed and the damage was done. The cement had dried up and damaged the complete paint.

As years passed by, our Chetak turned fifteen and the registration was expired. The hibernation continued till 2019 till my dear friend Karthik Makam – Bhpian funkykar noticed the scooter at home and offered to restore and use it. Karthik rode a scooter during his college days and he wanted to reminisce those days! I was more than happy to handover the scooter to him. Karthik took all the efforts and immaculately restored the Chetak and also took the effort in renewing the fitness certificate. Here’s the restoration link.

Before and after restoration:

This is the scooter I learnt to ride two decades ago and glad it was restored to its full glory: 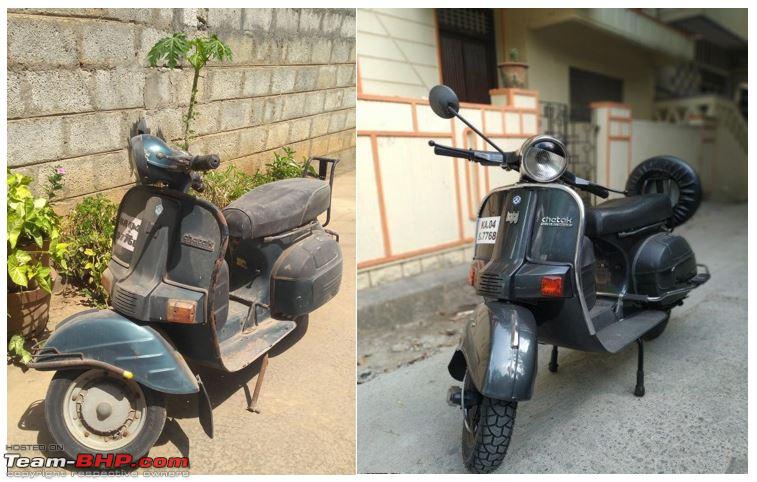 Karthik eventually bought many older model scooters, restored a few and enjoyed riding them especially post lockdown while the traffic in the city was less. Having owned many Classic cars and motorcycles, Karthik felt maintaining scooters is far easy as they have simple mechanism and easy to find the spares. Here are some of Karthik’s scooters along with my Dad’s scooter while they were parked at our home! Link to thread on Funkykar’s scooters. All scooters parked safely inside the compound: Collage of the Bajaj factory pic received over Whatsapp and scooters at home: The last two years have been very exciting with the scooter amid the gloomy times of Covid. Just before the Covid hit, Dad built his farm house on the outskirts of Bangalore and this proved to be a great blessing during lockdown days. Most of the classics were parked at the farm and I could go on pleasure rides quite often.

Quick scooter rides along the farm lands of Bangalore: [L to R] Chetak, Daughter Yashna and me. Chilling under a mango tree after plucking few mangoes!

This was during the second lockdown and I don’t think we would have had such leisure time if not for Covid: In the woods! Chetak dark edition with all the chrome fittings removed: Loving this look of the Chetak: Daughter and scooter – A memorable moment: Dad’s three classics united for the first time ever! Looking forward for the next 25 years of scooter riding: Collage of a Snapshot from the Hamara Bajaj ad from the internet and Yashna!! She’s 9 now and 9 more years to go for her to start riding the Scooter: 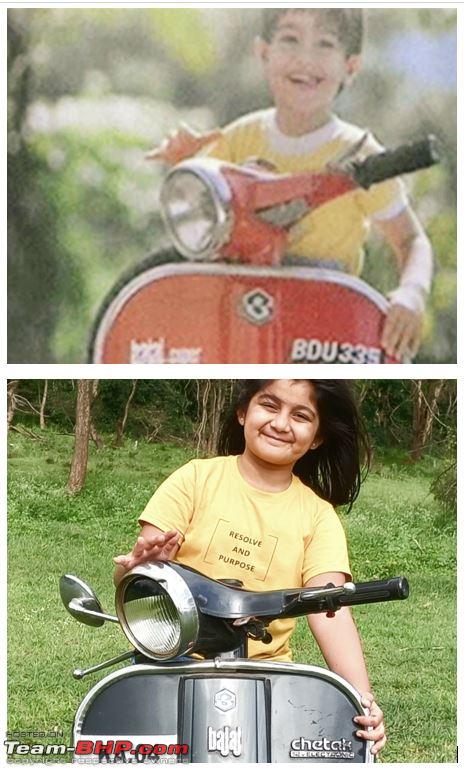 Being an classic automobile enthusiast, I am happy that I have been able to maintain all my Dad’s classics and each one of them is serving me equally well!