I once drove over a dirt road to enter a resort in Kabini. Half an hour later I was sitting in a Thar going over the same dirt road. This is the moment I had a new found appreciation for the A4’s suspension.

BHPian gungax recently shared this with other enthusiasts.

One year and 10,000 km – It’s been a fun journey so far. This jack of all trade car has really been practical and at the same time fun to drive. The car is good looking inside out and is the favourite in the family: One look at the low-slung sedan and a relative of mine refused to sit in the A4. He preferred the other car waiting which was a Suzuki Baleno. It is hard to imagine a car that sits so close to the road actually has a tall seating position. All those who did get into the car were surprised with the space and seating position.

I once drove over a dirt road to enter a resort in Kabini. Half an hour later I was sitting in a Thar going over the same dirt road. This is the moment I had a new found appreciation for the A4’s suspension. In the Thar I was trying to hold onto something, anything to stop my body from bouncing around. In the A4, my wife asked me why I was driving so slow over a decent road.

Small enough to easily manoeuvre in our city roads. A suspension that’s comfortable but also stiff enough to ensure no scraping of the underbelly in our cities and also rural roads.

A large square boot with the spare tyre neatly tucked away ensures all the luggage for long family trips easily fits in the boot.

We spent 2 weeks in Pune for a family event and the A4 was perfect for all the Airport Pickup/ Drops and ferrying all the relatives to various venues.

In the picture below, all the luggage went in and there was still place for 2 more duff bags and a 5 Ltr mineral water bottle: If only I got a penny for every time I was asked if the car touches bottom on our roads. Short answer is No.

The short wheelbase and the suspension setup make this a go anywhere car. I was questioned so many times about the ground clearance that I just went ahead and measured it.

The pictures below show measurement with the boot empty and no passenger inside. With the boot full, the nose lifts up a bit increasing the minimum ground clearance. The figures are guidelines and not actual as the surface is not exactly even.

The lowest point is the front wheel wind diffuser. This was measured at only 150 mm: The space below the engine cover was measured at 165 mm: Even the rear is lower than other sedans. Pictured below with a 3 series and a Slavia: Living with the A4:

We get two keys with the car and each can be paired to a user profile. One key is used by my wife and the other by me. We have put distinct covers to differentiate them: After 5 months away at sea, I just opened the car with my key and the seats, ORVM and Media Interface changed to my settings set 5 months ago. The user profiles essentially save the last used settings. This is independent to the 2 memory settings for the seat on the driver side doors. So essentially, we can save User Profiles + 2 additional settings (door buttons) for the driver seat and ORVM.

This Technology edition also gets the ‘Comfort Seat’ option. When the driver’s side door is opened the seat moves back and when the ignition is turned on, the seat comes back forward to the memory setting. This is a simple but useful feature: The Audi Multimedia Interface is simple and the large screen is useful when using Apple Carplay: After a few days, the Apple Carplay stopped working. Found out that it was common in Audi for aftermarket lightening cable to stop working. The issue was fixed by using an original Apple cable.

The Carlinkit 3.0 (CPC200–U2W Plus) used to make CarPlay wireless works without any problems. It takes a few seconds to boot up and connect to the phone when the car is switched on. The convenience of wireless ACP was so that the wireless charger can be used and there are fewer cables running around. Unfortunately, my iPhone gets so hot when charging wirelessly that is shuts off. I have tried without the case, placing exactly in the centre e.tc but it overheats every time. Now the wireless charging function is permanently off. The mobile signal booster in the Audi Phone Box still works with the wireless charging off and its very useful in rural areas: The small, deep storage compartment to the right of the steering wheel is usually used to store the user manual. I found this space to get cold when the air conditioning is on. Since there is no vent inside, I guess it is a defect. Any case, now I use it as a cool box to keep small bottles of water cold:

The door pockets can hold a 1 ltr mineral water bottle but my ‘Wide-Mouth Hydro Flask’ is too large and doesn’t fit. The door pockets do not get soft material lining so if there are loose items like a spectacle case, the door rattles with the music:

The Audi rubber mats were just too hard and they make the car look utilitarian. They are ok for a rugged SUV but look out of place in a luxury sedan. After a lot of deliberation, installed the 3M noodle mats. They are softer and more carpet-like than the hard rubber mats: On my last ship, we were required to move a new Toyota RAV4 whose battery was dead. A quick google search helped us to disengage the automatic gearbox but without power, disengaging the electronic parking brakes is too complicated. I realised that every car with an electronic brake must have a jump start battery as part of the emergency kit. Picked up a 70mai jump starter kit. I have used it to jump start a MY 2022 Tata Safari. It also comes with the 12V socket so now I can fill air in the tyres using my portable compressor drawing power from this battery instead of the car: 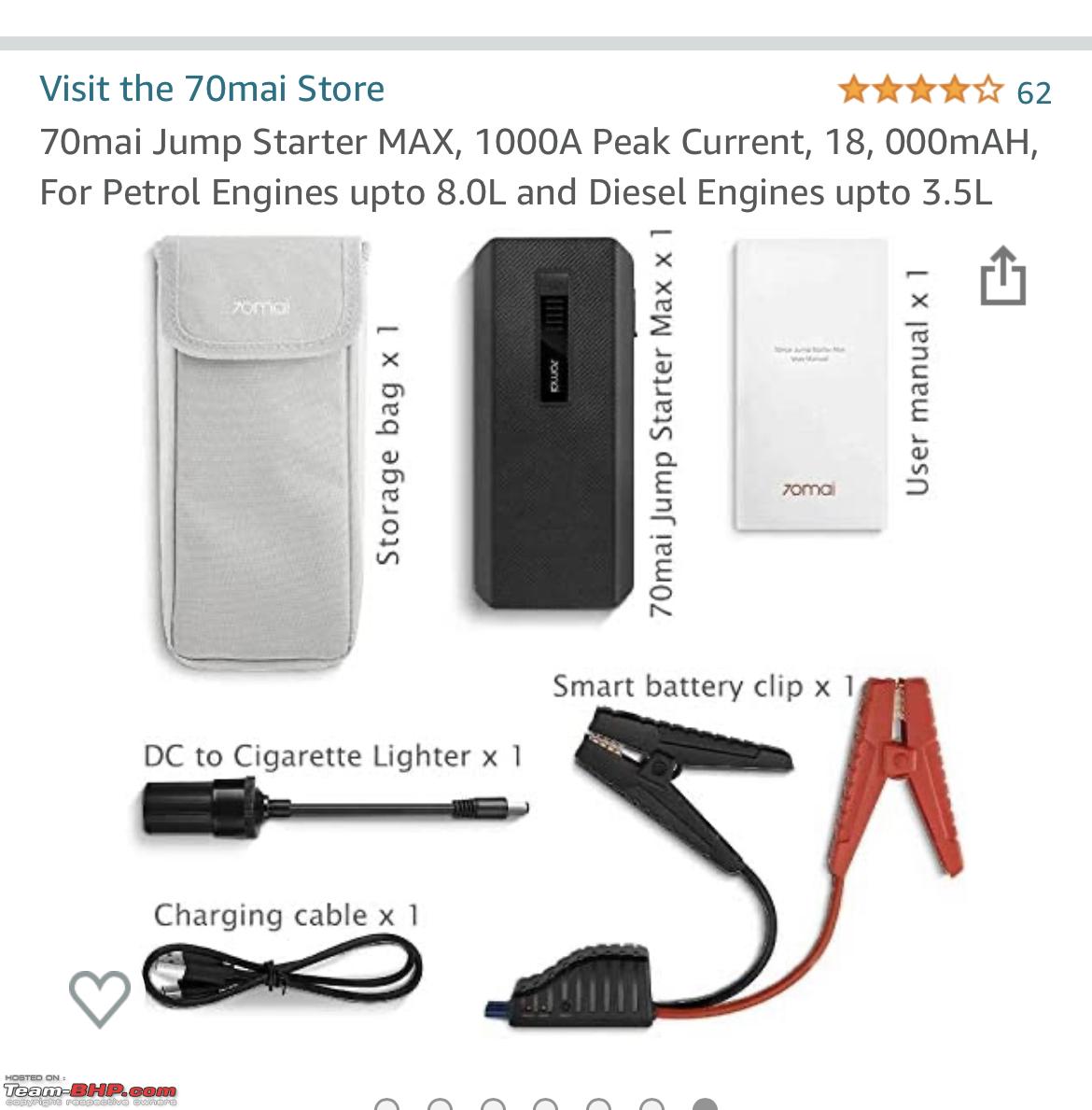 The PPF put on the entire car immediately after the delivery has proven itself worth the risk. Most of the scratches are made by individuals when the car is parked. The XPEL branded PPF is not self-healing as advertised but the folks at ‘Cars Buddy’ have managed to remove all scratches: The ClearPlex windshield protector has also proven its worth. Had a stone falling from a truck hit the windshield at high speed. The ClearPlex has taken the hit leaving the glass of the windshield intact. This protector film scratches very easily and already there are many marks across it. I expect the scratches to start hampering night vision within two years of installation:

Although I have driven Audi cars abroad, on Indian roads I now understand why VW group cars are so loved. Precise highspeed dynamics with a sharp accurate steering (on the lighter side exactly how I like it) makes long drives so much fun. This car will not set any track on fire, but with the comfortable suspension and practical boot, this is a perfect car to keep both passengers and the driver happy.

I was never happy with the OEM tyres. I tried to get them changed at the dealership before delivery. I was told it was not an option. After running in the car, I still felt that a different set of tyres will improve the dynamics of the car. So instead of waiting for the usual 30,000 Km mark I just traded in the OEM tyres at 3,000 Km mark. The Michelin Pilot Sport 4 have a lot more grip. This has improved acceleration and cornering. They have made low speed ride a bit stiffer: 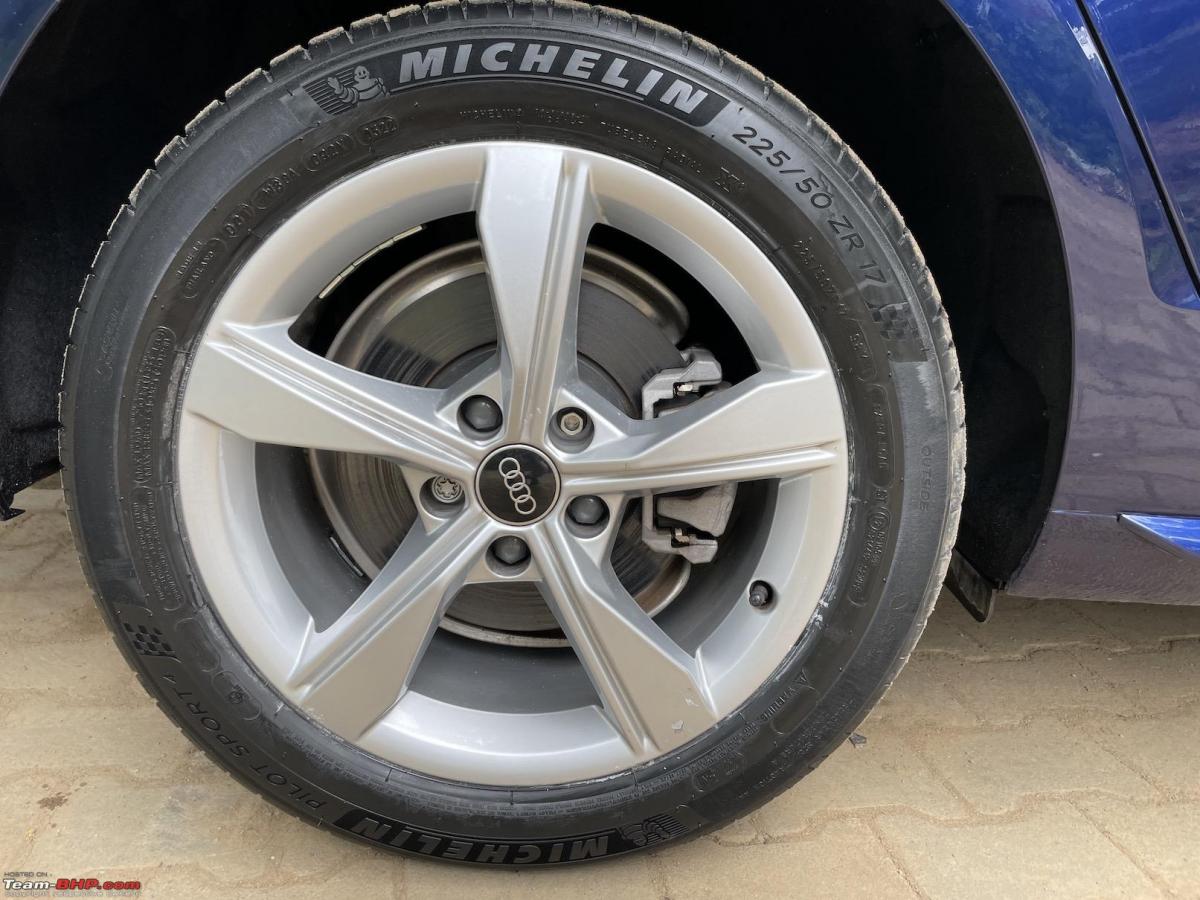 During mild braking, I found the car sometimes lurches forward as if suddenly part of the brakes got disengaged. Also, when coasting sometimes there is a resistance and the car is not coasting freely other times there is no resistance. Later found this is due to the regeneration cycle of the mild hybrid system: The stop/ start mild hybrid system gets aggressive once the remaining fuel range is below 100 km.

Once in Pune, we left Khadakwasla at 6:00 PM and reached our destination in Keshav Nagar at 11:45 PM. The 30 Km route took us 5 Hrs 45 min! Once the fuel range went below 20 Km, the mild hybrid kept shutting off the engine even with the A/C on. At our destination, the MyAudi app showed 2.8 Ltr fuel remaining: The car just got serviced at Audi Bengaluru service centre. I tried to get the servicing done in October but the dates I was free, they did not take bookings. I was told they were busy with the flood damaged cars and it was better to get a booking instead of a walk-in.

By the time the car went in for servicing I was already onboard my next ship. The service advisor kept me in copy for all communication since my wife is the primary owner.

They did not push too many addons, the car required a clean anyways and we had to use the pickup/ drop facility. So 30k for the first service was not bad. All the old parts which were replaced were sent back to us in the boot.

Overall, I am happy with the service.

Also, would like to mention that my Sales Advisor at Audi Central Bengaluru from a year ago still keeps in touch. I have troubled him for small things and he has always responded to my messages and answered my calls immediately.

My ownership experience these past twelve months of the Audi car and the brand in general has been good. 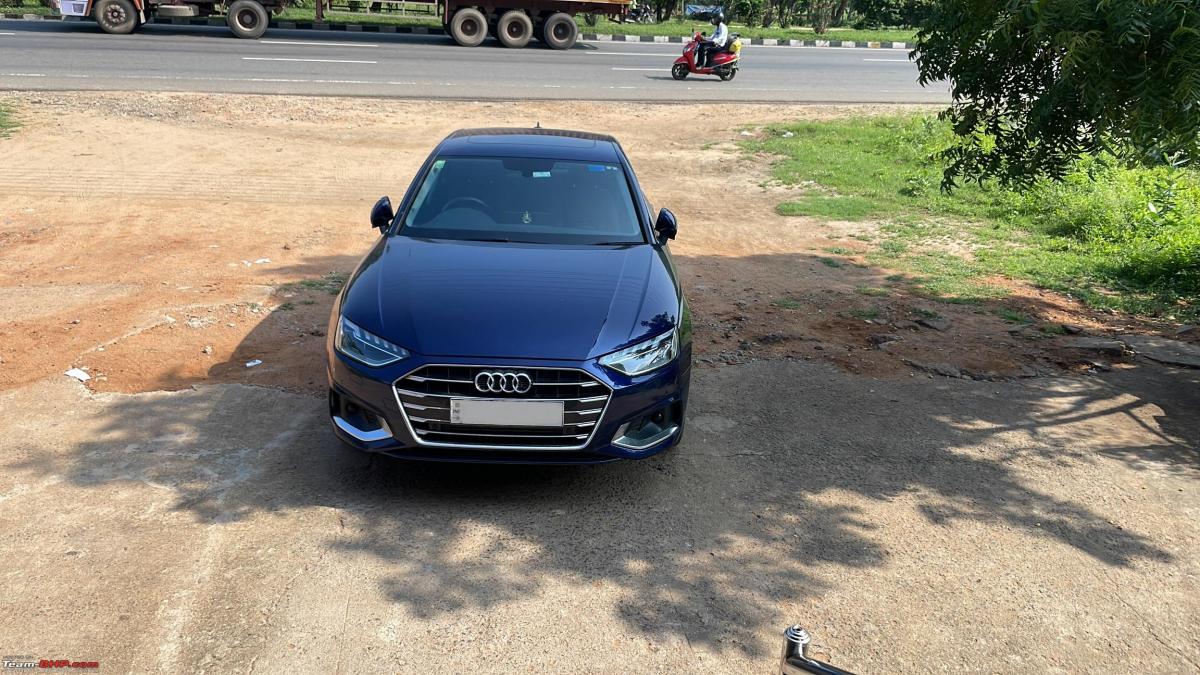