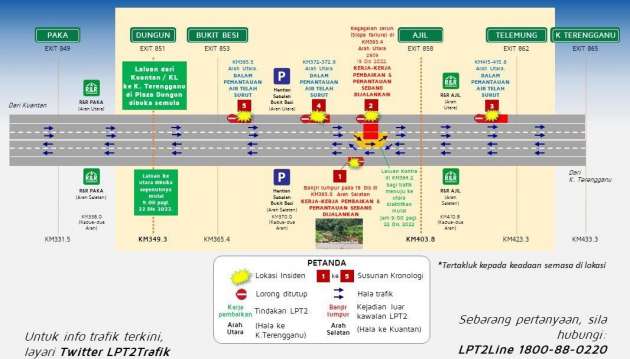 Here’s today’s update on the current conditions at the Lebuhraya Pantai Timur 2 (LPT2), following the landslide that occurred on Monday (December 19). This update was released by the highway concessionaire this morning.

Yesterday, the LPT2 was fully opened from Kuala Terengganu to Kuantan, southbound, but the northbound stretch between Dungun and Ajil was still closed. Today, Dungun to Ajil is fully opened to traffic heading north, which means that the LPT2 is once again flowing both ways.

However, works are still ongoing and you’ll need to slow down and drive safe in the affected northbound area. While flood water has receded at two points sandwiching the Bukit Besi R&R, the emergency lane is still closed. At the slope failure area where the landslide occurred (KM393.4), the emergency lane plus two normal lanes are closed, but a contraflow lane has been activated. Follow the signs and personnel.

Further ahead, there’s another stretch of emergency lane closed (KM415). The southbound stretch is all clear but you’ll need to slow down as there’s a contraflow for opposing vehicles at KM394. The emergency lane at this area is also closed for repair work. This is as of 9am this morning.