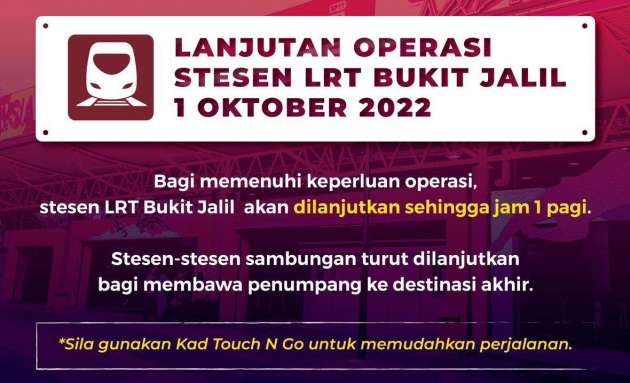 Rapid KL has announced that the LRT Bukit Jalil station will have operations extended to 1am tomorrow (midnight Saturday), October 1. Interchange stations will also remain open to ensure that passengers can reach their final destination.

While Rapid KL did not explicitly state the reason for the LRT extension, merely saying “to fulfil operational needs”, 1am extensions typically happen when the National Stadium or Axiata Arena in Bukit Jalil is hosting a big event.

Indeed, there’s one happening at the Axiata Arena tomorrow. Cuckoo is having its Appreci8th Anniversary Concert featuring some big stars such as brand ambassadors Lee Min-ho from South Korea and our own Datuk Seri Siti Nurhaliza. Twelve other artistes are also performing in the concert, held in collaboration with Astro.

For those heading to the concert, it’s wise to take the LRT. Riders are reminded to use Touch n Go cards for a smooth flow. For those who are not watching the match, it’s best to avoid the stadium area if possible, as it will be congested.