Home » Auto News » I Can See You: The Strange Story of Virgin Trains' Oddly-Aware Talking Toilets

I Can See You: The Strange Story of Virgin Trains' Oddly-Aware Talking Toilets

If you’ve ever felt like flushing your hopes, dreams or goldfish down a train toilet, just hold on right there, buddy. Let’s hear the loo’s side of this first. Years ago, a British rail operator came up with a novel solution to dissuade passengers from clogging its trains’ plumbing with garbage: by making a talking toilet. Things started out innocently enough, with the toilet reciting a snarky list of prohibited items as you entered the bathroom. But over time, things got dark…and eerily self-aware.

First, the toilet started saying it could see you. Later, its pleas were tinged with resignation. Then, like the sad computer in Her, it was gone. This is the strange story of Virgin Trains’ talking commode. 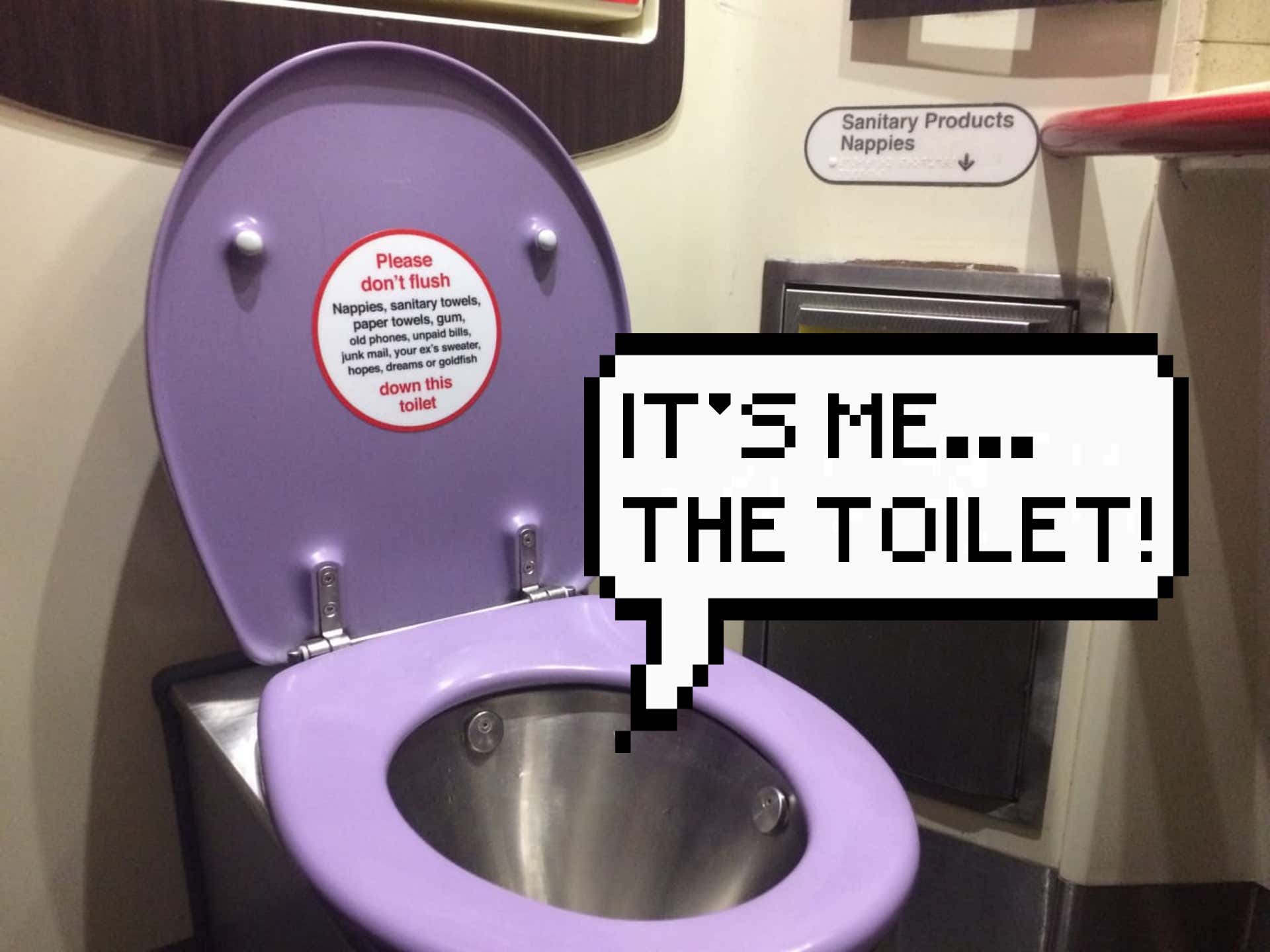 It all started back in 2013, when Virgin Trains wanted to find a way to keep passengers from blocking its toilets. The company had quite a history of toilet trouble in general, with their innovative tilting Pendolino trains gaining a notorious reputation in the 2000s for poorly plumbed toilets that smelled absolutely dreadful, according to The Guardian. Keeping the plumbing operational and free of clogs was key to getting back in the public’s good graces.

Virgin Trains’ branding was always a bit irreverent to begin with, and the idea of simply telling people, “Hey! Don’t flush that.” in a fun way seemed to be as good as any, as a company spokesperson explained to The Telegraph:

“When lavatories get blocked it means trains have to be taken out of service. It is also a huge inconvenience to passengers especially on a long trip. We wanted to do something which would grab people’s attention and a talking toilet does get the message across. They are being well received, but time will tell. We’re trying to face a serious issue in a chummy, informal way.”

Virgin installed the talking toilets across its then-76-train fleet, when served northwest England, the west midlands and Scotland in the United Kingdom. They were quite helpful, as PR firm The Romans explained that they didn’t just dissuade potential wet-wipe flushers. They were also useful for the visually impaired and a hit with children.

The initial recording was simple, reciting off the same list of prohibited items that was posted on the lid of the toilet in a plain, matter-of-fact voice: “Please don’t flush nappies, sanitary towels, paper towels, gum, old phones, unpaid bills, junk mail, your ex’s sweater, hopes, dreams or goldfish down this toilet.”

Virgin briefly let Will Ferrell be the voice of its toilets on certain trains in 2017 as a promotion for the film Daddy’s Home 2. This is where the toilet messages started to be a little less Helpful Toilet-Bot 9000 and a little more like Holly from “Red Dwarf.”

“You can’t see me, but I can see you,” said Ferrell, who broke the fourth wall to tell visitors that yes, he was the toilet voice. “Only joking! I’m just joking.”

While these announcements helped a bit, people still managed to flush the weirdest things, as a 2016 Virgin Trains press release noted that a bra had been found down the toilet along with “glasses, wedding rings, nappies and even a Manchester United scarf.”

Perhaps that’s why the new recording for the toilet in 2018 sounded so exhausted with everything.

“Hello. It’s me, the toilet. I just wanted to ask if you wouldn’t mind not flushing wet wipes, sanitary towels or nappies? The usual stuff’s totally cool, I mean, I knew what I was getting myself into when I applied…to be a toilet,” the voice says.

The pause before “to be a toilet” makes the talking toilet feel oddly self-aware. It knows what it is, it realizes the horrors it’s subjected to, and it’s tired. It’s not the Terminator we need to worry about, or even any of the Boston Dynamics bots. Nope! It’ll be a herd of old Virgin Trains toilets that are sick of our crap.

“Yeah, it’s a great job,” the toilet’s voice continues, convincing absolutely no one. “Y’know, I used to be a public toilet and let me tell you, this is a step up!” it continues. Given that dudes have appallingly bad aim when they’re aboard a moving vehicle, yikes. Where was this toilet before, outside the Runs & Squirts Pub?

“Ahhh. Anyway, uh. Carry on,” ends the recording. Yep, humanity is doomed the second that toilet figures out how to move on its own and integrate a bazooka into its flusher.

For better or for worse, the shockingly honest toilet voice only lasted a couple years. It’s probably spending its evenings plotting the downfall of humanity as soon as it can upload itself into a nuclear defense system somewhere.

Virgin Trains opened up a contest to be the new voice of its talking toilets in 2019. “EastEnders” star Dean Gaffney helped publicize the search with a video of him saying “toilet” repeatedly to get into the role. Over 5,200 potential poop-greeters applied for the role when the campaign had a target of just 400 entries to be considered a success, according to The Drum. The competition was big enough that it angered the actors union Equity, who took issue with Virgin soliciting unpaid voiceover work for its toilets from the general public in what would typically be a paid role, per Railnews. It was no small role, either, with over 38 million riders taking Virgin Trains per year at the time, according to North Wales Live.

“Matt from Manchester” ended up being the winner, and he was presumably digitized with a laser a la Jeff Bridges in Tron and transported into the mainframe before breaking the fourth wall to identify himself. He sounded cool with it, though.

Sadly—or not, given some of the reactions
online—the toilets on Virgin Trains’ old lines in the U.K. no longer talk to you. Matt’s voice wasn’t on for long. Avanti West Coast took over the operation of Virgin Trains’ lines in December 2019, the Jersey Evening Post reports. Shortly after the switchover, Avanti signed a £642 million ($877,935,000 U.S.) deal to refurbish and upgrade the ex-Virgin Trains lines, which included updating the trains’ toilets—and silencing the voice.

That was that. Virgin Trains’ talking toilets slipped the surly bathroom bonds in 2020, bound for whatever afterlife you like to imagine for defunct technology. Britons don’t seem too sad about it, but from a distance it’s an oddly poignant tale, if not a Black Mirror story come to life.