Ahhhh, that new car smell! Whether it be the sense of satisfaction or the bragging rights about owning a brand-new car—there’s no mistaking that fresh scent. Sadly, nothing this good lasts forever. And oftentimes, things go from wow to foul.

It appears that a number of new Hyundai Palisade owners have taken to the internet to complain that once their SUVs’ new car smell goes away, it’s being replaced by an utterly disgusting one. And that despite trips to the dealer, interior conditioning, and even baking the smell in the heat, not a single soul can pinpoint a resolution to the odor.

This stinky story was uncovered by the team at Cars.com who noticed that its long-term Palisade test vehicle had developed a certain funk. After digging a bit deeper, it was able to uncover that it wasn’t alone. In fact, owners on Palisade Forum have been complaining
about
this
very
problem for months, with no apparent resolution.

Several owners have attempted to treat the odor themselves by using off-the-shelf cleaning products, but others have gone straight to the dealer. One Hyundai technician who took a whiff of one car even reportedly described the small as “old worn socks,” though others have used words like “old onion rings,” “garlic breath,” and outright “foul,” according to forum posts.

Eventually, the leather seats emerged as a common denominator in these cases. The smell only appears to affect vehicles equipped with the premium Nappa leather seating material. Some owners are blaming the seats entirely, while others are pointing their fingers specifically at the headrests.

Owners say that they begin to notice the smell after a few hundred miles, typically within several weeks of ownership. Sadly, the smell doesn’t go away with time. Owners who are approaching a year of ownership say that their vehicle still has an unpleasant smell and that complaints to Hyundai’s corporate office have fallen on deaf ears. 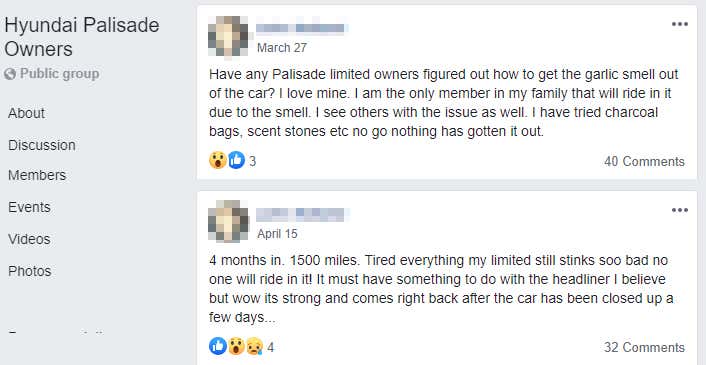 It’s quite the crappy situation as most Americans love that new car smell, and have been trained to associate the unique smell with the quality of a new car. We even have air fresheners hanging from our rearview mirrors with the sole purpose of duplicating that smell. But it’s not a worldly-appreciated scent. Many drivers outside of the U.S. absolutely hate the smell, and automakers like Ford have even worked up ways to eradicate the smell before cars end up on customer driveways.

The new car scent is actually the breaking down of Volatile Organic Compounds (VOCs). Flowers and other plants are an example of a natural source of VOCs, however, a large number are synthetically produced compounds like coatings, solvents, sealants, and adhesives used to manufacture modern cars. VOCs rapidly decay and the smell eventually (and quite literally) goes right out the window.

It’s not clear if the smell in the Palisades is being caused by VOCs used during manufacturing, or if it can be attributed to the seat material itself. Interestingly, we couldn’t find nearly as many complaints about the Palisade’s sibling, the Kia Telluride.

We’ve reached out to Hyundai about this issue will update this story when we hear back.

Related posts:
Project CARS 3 Launches to Mixed Reviews
The Absolute Best Labor Day Deals On New Cars, SUVs, And Trucks
Best News
Toyota Motor North America: New BEV Coming In 'Short Term'
12/05/2020
FBI: No crime committed as ‘noose’ rope was there in 2019
06/23/2020
Why VW Pulled The Plug On A 400bhp VR6 Arteon R
06/23/2020
2021 Kia Grand Carnival breaks cover – solid looker! – paultan.org
06/24/2020
New Volkswagen Arteon Shooting Brake arrives as part of facelifted line-up
06/24/2020
Recent Posts
This website uses cookies to improve your user experience and to provide you with advertisements that are relevant to your interests. By continuing to browse the site you are agreeing to our use of cookies.Ok