Here’s Why the New USPS Mail Trucks Look So Weird

Oddly-shaped mail trucks seem to be a staple of Americana. In fact, when my local post office started to put a few Mercedes-Benz Metris vans in rotation with its fleet of Grumman LLVs, I grew a little bit concerned that our little slice of weird was getting tool mainstream. How very hipster of me.

But never fear! Yesterday, we learned that the USPS has finally accepted the design for its Next Generation Delivery Vehicle (NGDV) and will be putting a plethora of eccentricity back onto the streets courtesy of the folks at Oshkosh Defense. That begs the question—just why does it have to be weird? 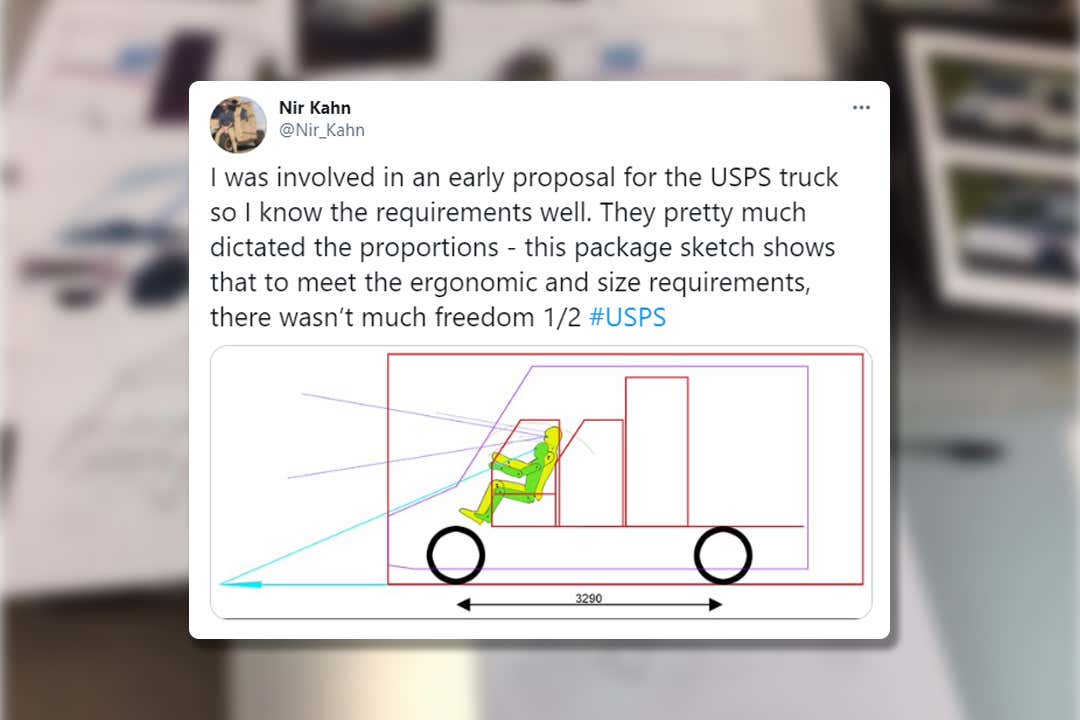 It should come as no surprise, but as part of the bidding process, the USPS defined a tight set of criteria that those responding to the proposal would need to adhere to in order to be considered. Nir Kahn, design director for custom vehicle manufacturer Plasan, spoke briefly about these constraints on Twitter, explaining how the odd shape was inevitable.

“The requirements dictated the step-in height, the glass height (including the low side glass), the vision angles, the internal height, and the maximum roof height,” wrote Kahn in a tweet. “That was all locked in.”

Other constraints included the ability to reach the mailbox while in the seated position, and the requirement to see the ground around the vehicle. The seating position went hand-in-hand with the glass height and vision angles and seemingly caused a near-fixed position in the hip-point height of the driver’s seat.

The requirement to see the ground also contributed to the sharp falloff of the vehicle’s nose and factored into the sloping lower corners of the windshield, all despite the dashboard being in the way. This seems odd to pose as a requirement, especially since the winning bid also included 360-degree cameras and collision avoidance systems. Perhaps as a manual failsafe should the electronics go out? The USPS has always had pretty strict requirements for visibility. In the past, the agency even gave drivers advice on how to operate their delivery vehicles, including not backing up whenever possible.

Kahn says that he tried coming up with many different ways to make the package more attractive. At one point, he even had a photo of Cliff Clavin (the postman from Cheers) sitting on his table to help design a more friendly appearance. But at the end of the day, it all came down to the requirements.

Now, the Grumman LLV is certainly a…unique vehicle. But one thing it isn’t is a looker. That hasn’t stopped it from being the face of the USPS since it entered service in 1994, easily recognizable by every man, woman, and child who can send a letter. And Kahn says that’s what drew him to the project. You see, Kahn was one of the designers responsible for the JLTV, the replacement for the legendary HMMWV—the idea of not only designing a replacement for not only the most iconic military vehicle to exist in U.S. history, but also its mail truck, would be quite the honor.

Plasan, unfortunately, didn’t win the bid for the NGDV, so while we won’t have John Ratzenberger’s face greeting us at our mailboxes every day, we at least now know the untold story of why these tiny trucks look so weird.