Here's Every Minivan Left on the Market in 2021

It’s time to accept that minivans are good. They’re practical, they’re comfortable, and in 2021, they even look pretty darn good. These three-row haulers have enough space to move your family, pets, and the kitchen sink—because you probably can’t resist a weekend trip to The Home Depot when you own one of these.

The minivan landscape has changed recently so you might not be sure of what to buy for your new journey into vandom. Fear not, however, because we’ve got you covered! These are all the minivans for sale in the U.S. in 2021. 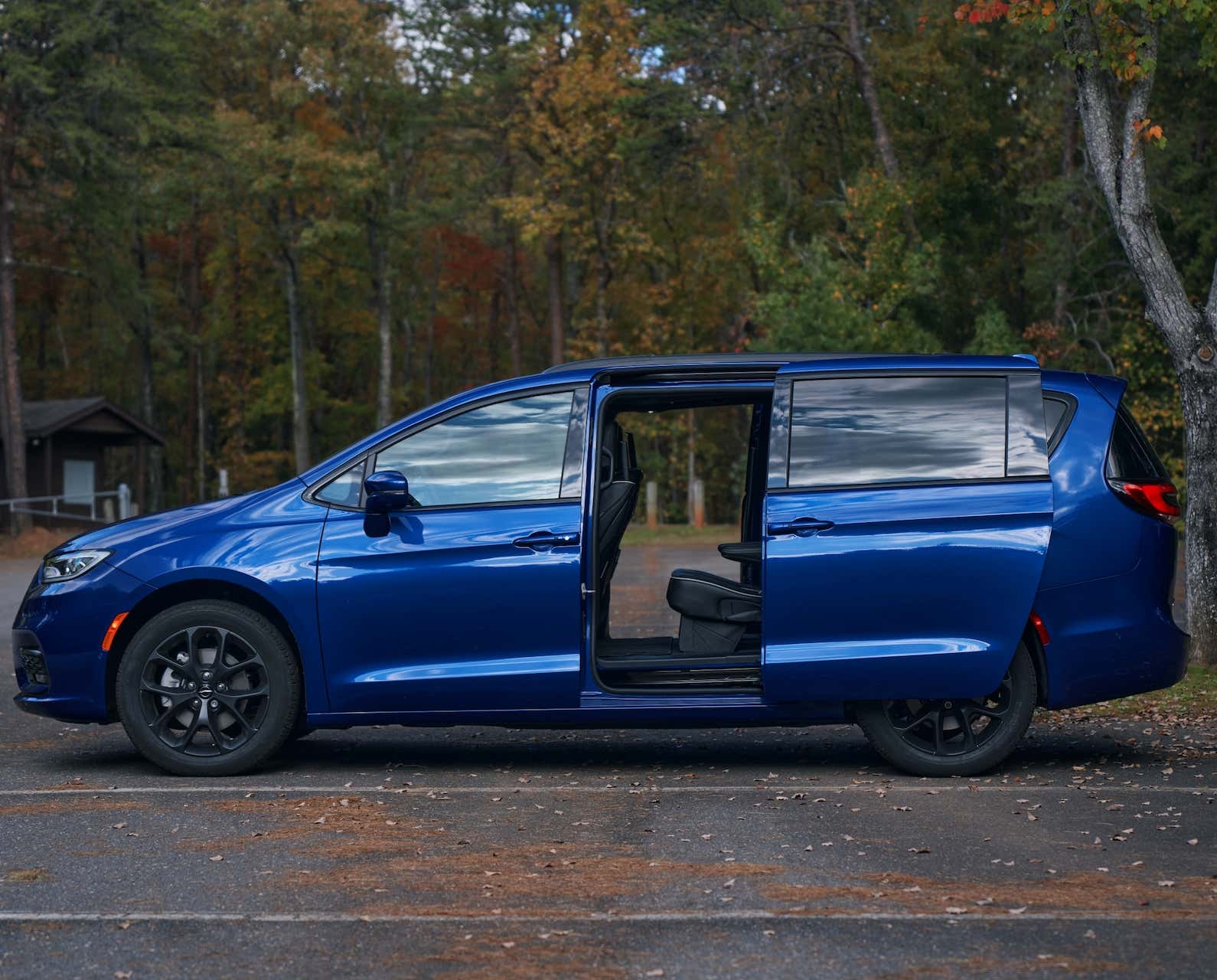 Chrysler’s flagship Pacifica minivan received a notable facelift for 2021, finally separating it from the more modest Voyager. The Pacifica can be had with an optional hybrid powertrain, which we recently reviewed, as well as a new all-wheel-drive system that’s available on the non-hybrid models. All of these features make it much more competitive in its segment.

The Pacifica’s interior is excellent, especially as you near the top-tier Pinnacle trim. A class-leading 10.1-inch infotainment system, acoustic glass, and touches of luxury line a minivan that can crest $50,000. Of course, you’ll also get Chrysler’s famed Stow ‘n Go seats…unless you spring for either AWD or hybrid variants, in which case the floor space is taken up by the driveshaft or batteries, respectively.

The Pacifica also happens to be (arguably) one of the most stylish choices on the market, both inside and out. 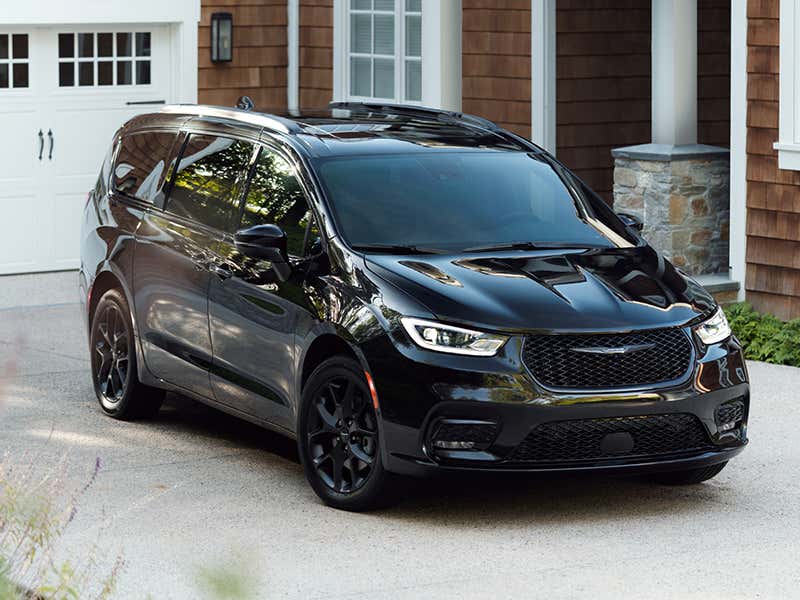 I mentioned above that the Pacifica was treated to an all-new facelift for 2021. Unfortunately, the bean counters at Chrysler weren’t so kind to the budget-oriented Voyager.

That being said, there’s plenty to enjoy about this wallet-friendly van, as the Voyager continues to be Chrysler’s answer for an entry-level people hauler. Of course, it foregoes hybrid power and all-wheel drive in order to keep costs down, but you might not even need those things anyway depending on where you live and your driving habits. The good news is: if you’re looking for a no-frills version of the Pacifica, this can be had at nearly $8,000 less. There’s a reason Chrysler calls it “the most affordable minivan in America,” after all. 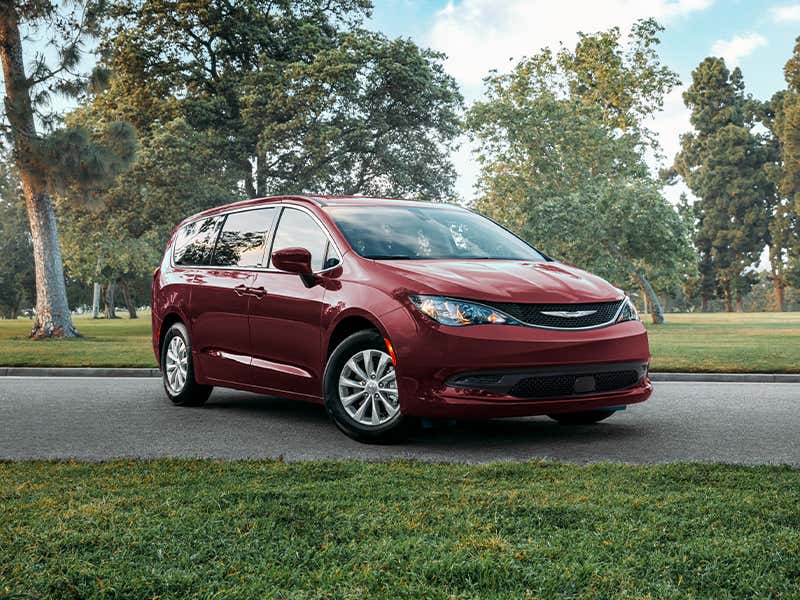 The Honda Odyssey is still here, and like many of its competitors, it’s carrying a fresh new face for its recent mid-cycle refresh. And guess what, thousands upon thousands of happy customers still believe it is the king of minivans.

The Odyssey carries over the fantastic 3.5-liter V6 from previous years and utilizes Honda’s smooth 10-speed automatic transmission to row through the gears. While it might not have all-wheel-drive like the Pacifica and Sienna, or an optional hybrid drivetrain, it still packed with technology and offers tons of family-friendly features.

In fact, technology is what fueled most of the updates in the 2021 Odyssey. The Honda Sensing suite of high-tech safety features is now standard across the board, and the Elite trim receives a rear seat monitoring system with a birds-eye-view camera to monitor passengers. Other minor changes were made to the seating, HVAC controls, and other small cosmetic tweaks inside the cabin. 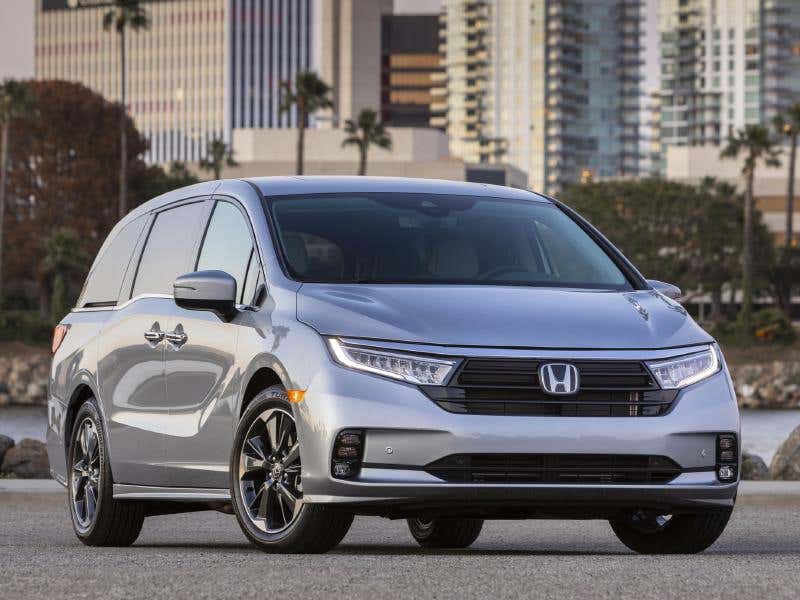 Do you know that Kia still makes a minivan? Well, it does, and the Sedona still exists for buyers looking for something in the price range between the highest-trim Chrysler Voyager and the mid-tier Honda Odyssey.

Other than discontinuing the van’s lowest trim, Kia decided to forego changes for 2021, just as it had the year prior. That means the refreshed styling, infotainment system, and new eight-speed automatic transmission has been carried up from 2019. But despite the lack of changes, the Sedona is an incredible value for the price. It’s packed with premium features like folding mirrors, a power liftgate, and LED headlights, that would require a significantly higher price jump to a competitor’s top-tier model. Plus, Kia’s warranty isn’t that shabby either.

The Sedona made up just 3 percent of Kia’s sales in 2019, and with Hyundai heavily focusing its efforts on the Kia Telluride and Hyundai Palisade, we’re not sure what the future holds for the Sedona. That being said, the lack of changes and sub-par sales paint a grim picture. If anything, it might be the last year to get a true minivan before it morphs into this weird SUV-wannabe-thing spotted lurking in foreign markets. 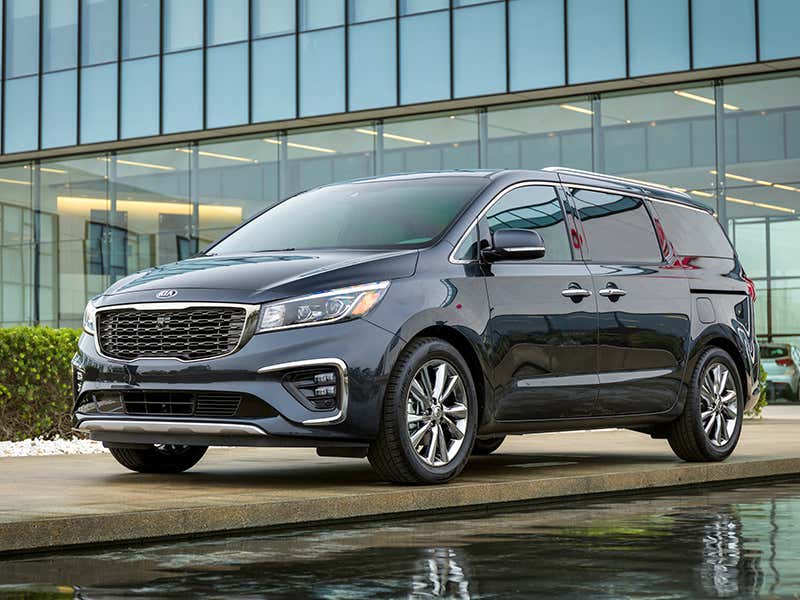 Speaking of weird SUV-wannabe-things from Kia, behold the 2022 Carnival. Unlike the others in this list, the Carnival is a 2022 model, but it’ll be available for sale in 2021, so it’s rightfully making this list.

It’s really quite easy to see that the Carnival is a stylized minivan that wants to look like something else—because minivans are a hard sell in 2021—but the styling is actually quite good. Whether Kia calls it a minivan or not, the swanky interior gives way to a luxe interior that packs first-class-style seats with leg-rests, seating for seven or eight passengers, and up to 45.1 cubic feet of total cargo room with second- and third-row seats folded.

Under the hood, there’s a 3.5-liter V6 pushing 290 horsepower and 262 pound-feet of torque to the front wheels via an eight-speed automatic transmission. Towing capacity is rated at 3,500 pounds, matching the Toyota Sienna and Honda Odyssey, but just 100 pounds shy of the Chrysler Pacifica with all-wheel drive. 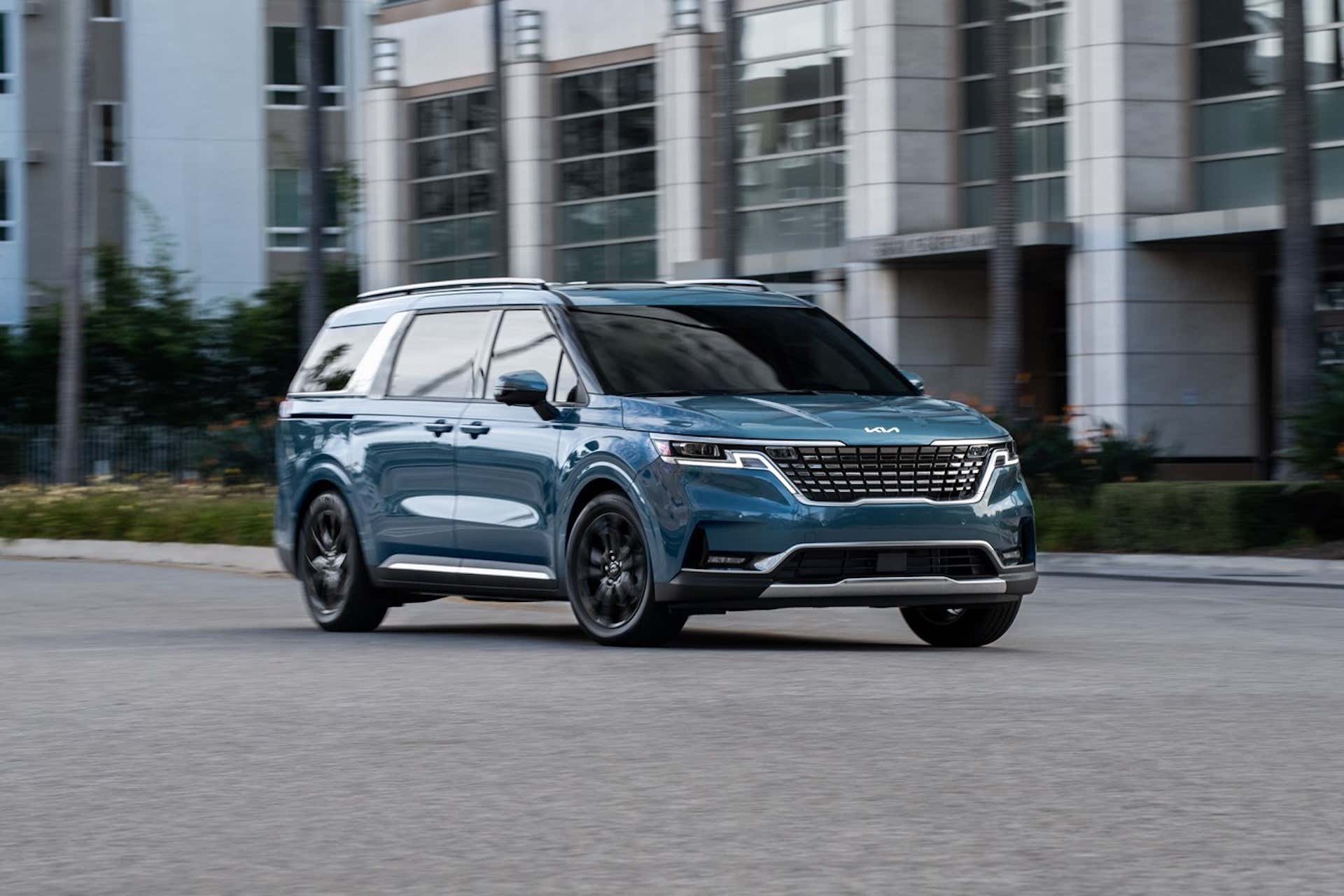 Last but certainly not least, is Toyota’s well-known entry into the minivan territory: the Sienna.

Sporting an all-new look for 2021, the fourth-generation Sienna now features a standard hybrid powertrain across the lineup, with all-wheel drive being an option. Its 245-horsepower 2.5-liter four-cylinder sips fuel thanks to said electrification, delivering a class-leading 36 mpg. We recently had the chance to drive it, and this is what we think.

Inside is a much more modern package in the all-new van that includes a larger infotainment system, more deeply integrated tech, and revised ergonomics. It also took some hints about the whole minivan stigma and fitted its XSE trim with some rather sporty appearance upgrades that make it look like you’re the parent headed to the go-kart track instead of soccer. 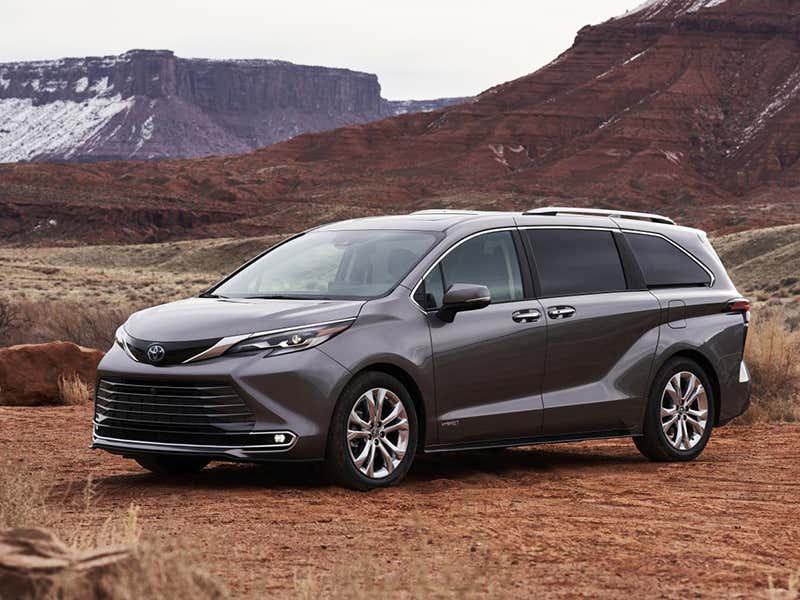