I noticed the “Service Overdue” message was still showing on the dash. Brought it to their notice and they called a mechanic to fix it. He clearly had no idea what to do.

BHPian ashwin.terminat recently shared this with other enthusiasts. 12 months and only 2000km later, it was time for the 3rd free service. During my quest for a convenient service center, I noticed a new one opening up near Koramangala BDA Complex. Picked up the phone number from Google Maps and confirmed that they do indeed service the RR310.

Issue #1: No itemized invoice during billing:

Went to pay the bill and I was told to pay Rs.1861. No itemized invoice was provided. Just Rs.1501 + Rs.200 + Rs.160 was mentioned on the job card. The Rs.160 was “labour charges” it said. But wait, isn’t labour free during free services? I asked the cash counter the same thing but they said labour has not been included. They wouldn’t accept cards without charging 2% extra. Paid via UPI and went back to the bike with a handwritten receipt.

Issue #2: Service indicator on the bike was not reset:

As soon as the bike was handed over to me, I noticed the “Service Overdue” message was still showing on the dash. Brought it to their notice and they called a mechanic to fix it. He clearly had no idea what to do. I went away for a bit and he said it was done.

I asked them again and they called a different mechanic. He didn’t even know how to navigate the console on the bike. He was looking for buttons on the dashboard. He found the menu and was also clueless on what to do. He was going to change the system date/time when I told him what it does. Then I was told they need a tablet to update this and it will only reach them next week. He gave me his number and said he would let me know once it arrives. Could have told me this earlier? Also, the fact that they mechanics still tried to adjust it on the bike makes it appear like they might not have been trained for the RR310. Anyway, moving on.

Got home, got off the bike and was greeted by a lot of lubricant being deposited on the freshly washed and polished rear wheels. 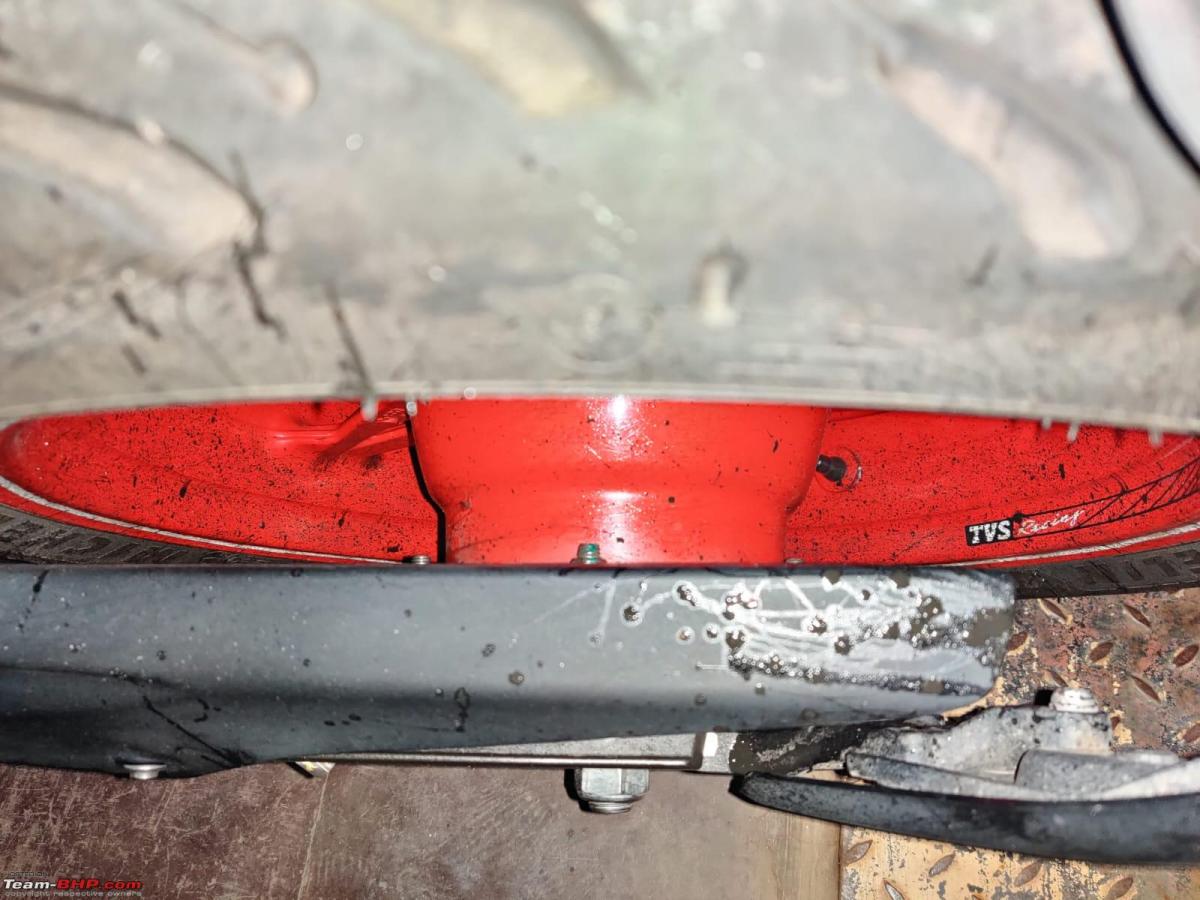 I immediately messaged the person who confirmed they service the RR310. And he said they used TVS Lubricant. When I asked why, this was the conversation: 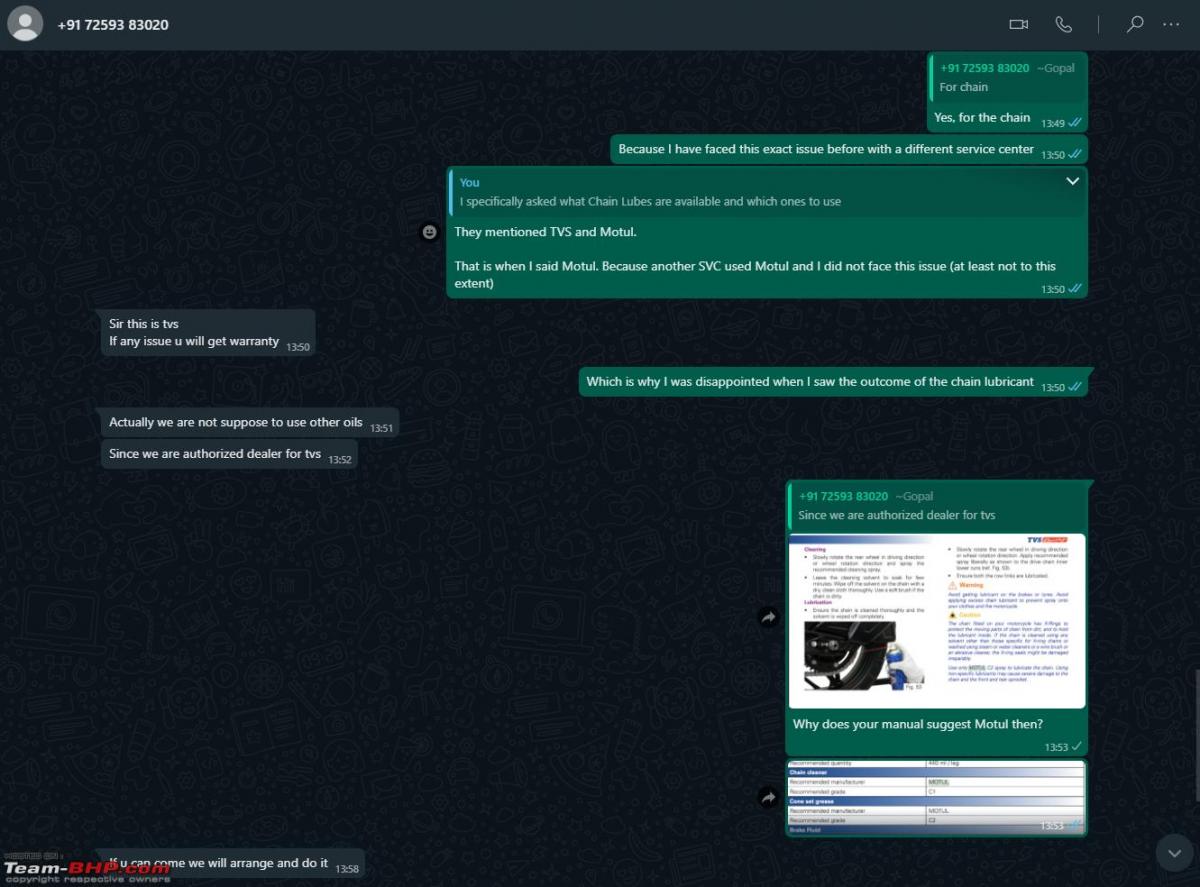 Issue #5: Service history not updated on the TVS Connect App:

I highlighted this on 31st October as soon as I got the bike back. They said it would be done. I have followed up since then but they seen-zoned me:

Issue #4: All sorts of shenanigans with the invoice:

On 10th November, I reached out to the service center again through the person who said he will let me know once the tab reaches to update the “Service Overdue” message. He said the tab had not yet come But he sent me an invoice… for Rs.3191. Which is Rs.1330 more than what I had paid. I called him and told him this is not my invoice, he said he will check and get back. This is the invoice I was sent: I followed up on 11th to ask for it… no response. On closer inspection of the bill, I noticed the following:

Specs recommended in the manual: 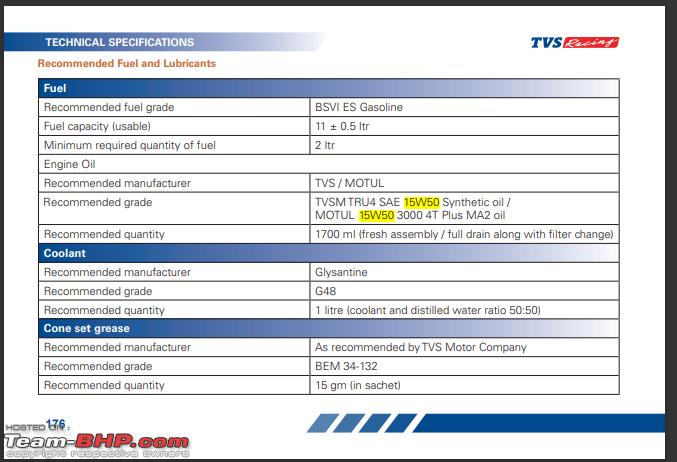 And today morning, they call me and say I need to pay the remaining because I paid less. Excuse me?

I asked them what oil was used and they said 300V as per the invoice. I asked them is it the recommended grade, they said yes, 10W40. I told them to check the manual it says Motul 3000 15W50. Why did you use 10W40? He gave the phone to his manager who asked me to come to the service center to explain. Why? I can very well understand through the phone. Try me. Then he said he will check and get back.

I called them again 2 hours later and asked for an update. The same spiel – we will send someone with 300V to your house they will fill it up. Why? Just give me the damn invoice! I told him about the excess coolant and engine oil not being returned. As well as the coolant not being the one suggested by the manufacturer. He said he will check with his “manager” and get back.

In summary, none of the consumables they claim to have used is the one suggested by the manufacturer. I will definitely link this thread in my complaint to TVS as well.