We’ve seen all kinds of modified cars over the years; everything from high-performance stripped out track weapons to wild donks and crazy jacked-up safari builds. What we haven’t seen is cars with lots of extra wheels that serve no legitimate purpose whatsoever. This heavily-modified Toyota Vios has those in spades.

Hailing from West Java, Indonesia, this build is the creation of Roni Gunawan, who owns the local Gemah Ripah taxi company. Priceprice.com reports the outlandish build cost on the order of 90 million Indonesian Rupiah, or somewhere in the realm of $6000 US dollars. Based on a front-wheel drive Toyota Vios sedan, a successor to the Tercel, it’s fitted with two additional sets of rear wheels. One set runs along the ground as you might expect from any garden-variety six-wheeler. The final set of wheels, however, is mounted higher up, running on top of the lower set of wheels, for no other reason except that it looks cool. The additional wheels are sprung, in order to keep the top set of wheels in contact with the lower set so that friction will turn them as the car moves. 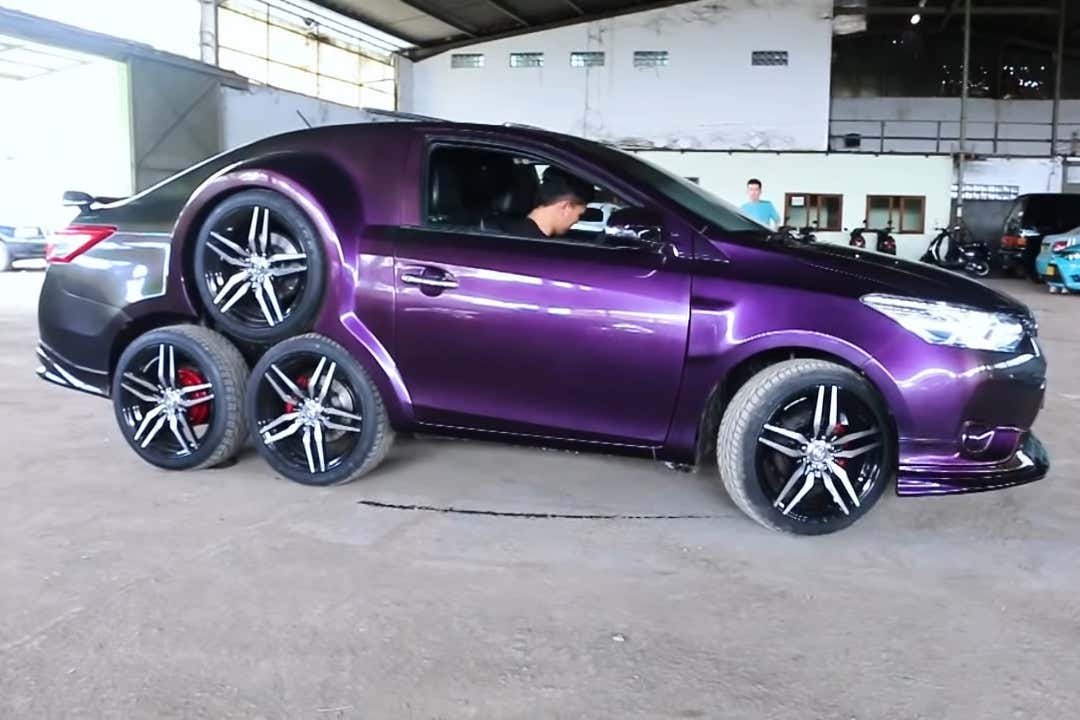 The hubs for the extra wheels are all mounted on custom steel framework welded inside the rear of the car. There’s plenty of support plates and bracing welded in to support the weight of the added wheels. While brake discs are visible on all the additional wheels, they’re simply there to allow the wheels to be bolted up to the stock hubs without unnecessary modification. Custom bodywork wraps around the extra wheels in place of the original rear doors, helping to blend the superfluous wheels into the bodyshape of the car in a way that looks surprisingly natural. It’s a lot less useful than most 8-wheeled builds we’ve seen, but it certainly is original. 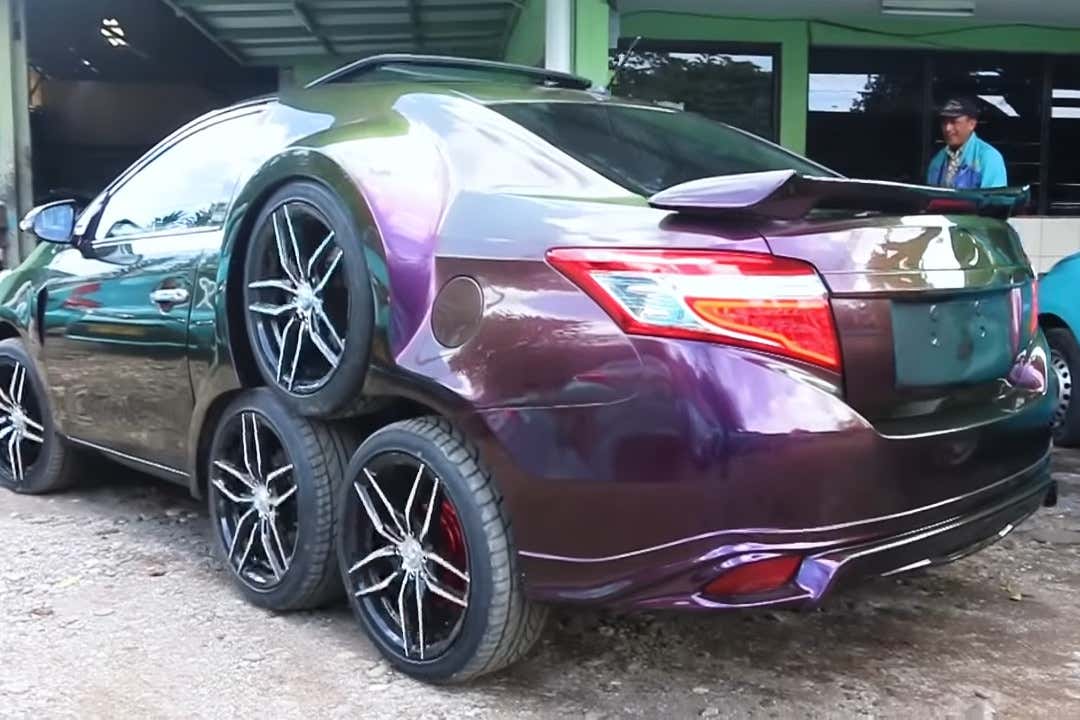 In motion, the car looks an absolute treat. Fitted with some stylish 5-spoke mag wheels all round, the visual effect as the stacked rear wheels rotate in opposite directions is a mesmerizing one. The car’s pumped rear guards and show-car paint job only add to the effect. The car has also received plenty of upgrades to the interior, too, and comes complete with a big audio system that’s appropriately backlit with color-matching LEDs. Oh, and did we mention the Lamborghini doors? 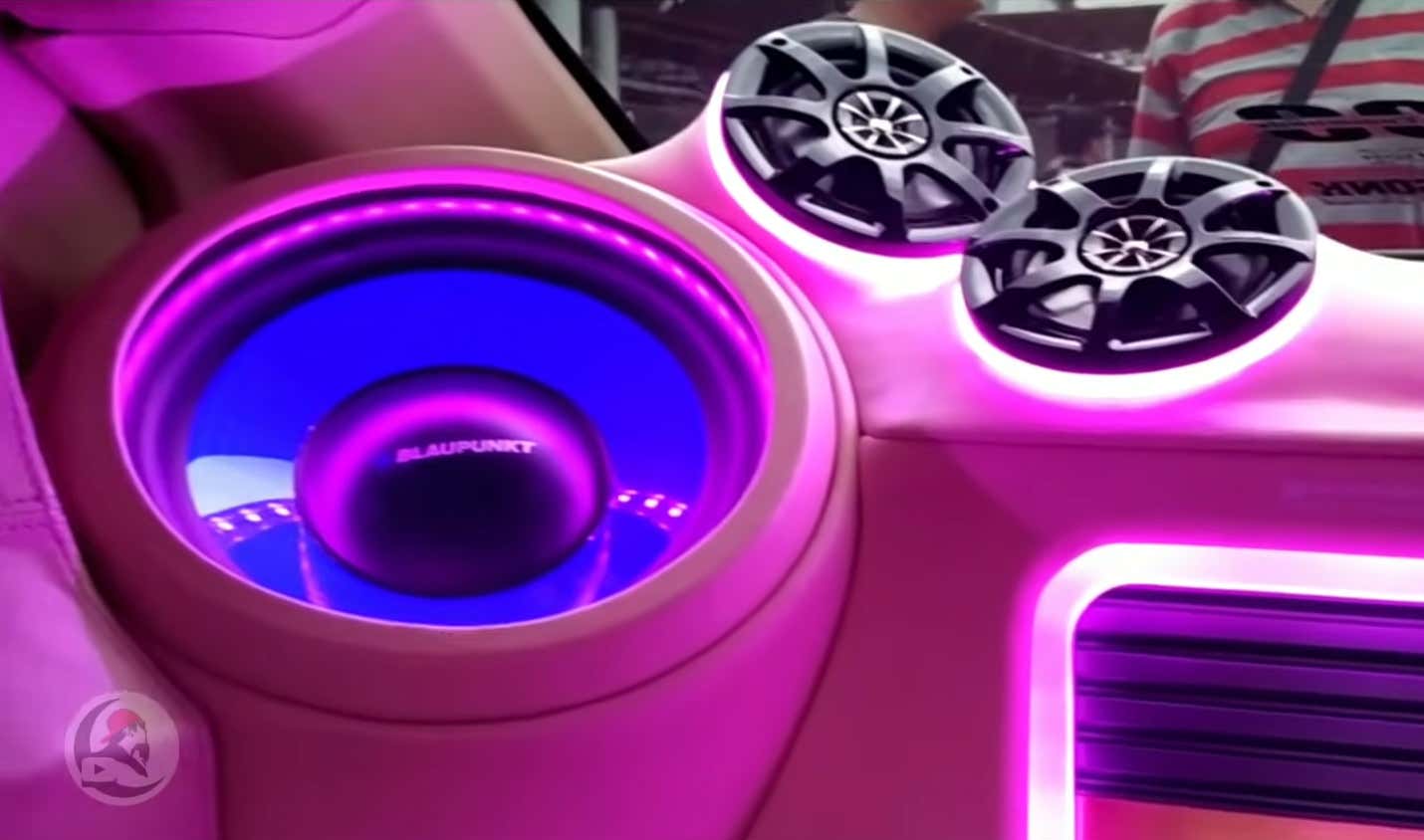 The car does come with some drawbacks—the rear seats are entirely gone to make way for the extra wheels, and wheel and tire costs have increased by approximately 100% over a stock Toyota Vios. With the extra wheels undriven and solely adding weight, there’s really no tangible performance benefit on offer either. It also lacks license plates, suggesting the car as shown may not be entirely welcome on the highways of Java. Given the potential noise and vibration issues the car might have at high speeds, we’re perfectly fine with that.

It’s a build that shouldn’t be judged on the implicit value of its modifications, but considered instead as an art piece—an exploration of what can be done, when we abandon all preconceptions of what a car should be. From the scissor doors to the pearlescent purple paintjob, there’s not a single feature on this car that really makes any sense from a practical standpoint. It exists instead to be looked at and appreciated for its sheer ridiculosity.