There’s no question climate change is a hot topic globally and our air quality is arguably one of the hottest elements of the topic.

Automakers are coming up with ideas to combat it and not just by building EVs, but Polestar’s effort to build a carbon neutral car and Porsche urging suppliers to switch to renewable energy.

But what about the air inside your car? Ford says that starting this year it plans to roll out new certified cabin air filters to help clean your interior’s air, called Ford Refresh95. Ford plans to have the filters in a majority of its lineup by the end of 2023. Refresh95 will be standard equipment.

The way Ford explains it, as air moves through your vehicle’s heating, air conditioning and ventilation system, Refresh95 is designed to help reduce microscopic particles that can originate both inside and outside the vehicle. The company says this a big deal because according to the EPA, particles less than 10 microns in diameter, particularly those less than 2.5 microns, pose the greatest health risk. 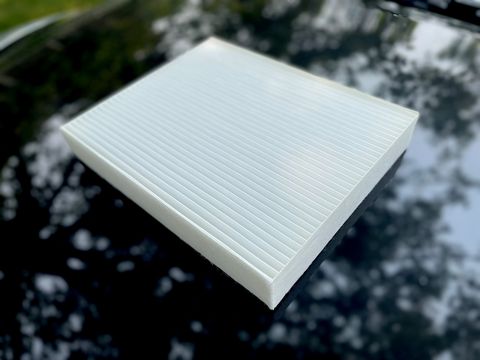 The filter can help reduce allergens, trapping 99 percent of some, including common pollens and dust particles. It can also help reduce airborne concentrations of bacteria-sized particles. Ford says the system also helps filter the particulate matter found in smog and soot – are you listening Californians?!?

The company says its new filter was put through comprehensive third-party lab certification testing, “including pressure drop testing to verify Ford Refresh95 will work throughout the recommended service interval.”

Refresh95 availability is expected in the fourth-quarter of this year for select vehicles including the Bronco Sport, Escape, Explorer, Mustang Mach-E, Police Interceptor Utility and Maverick.

You don’t even need a new vehicle to breath easier: Customers with compatible vehicle will be able to purchase a Ford Refresh95 air filter from their local Ford dealer, starting later this year.

Ready to breath some fresh air? Let us know in the comments.

Related posts:
McLaren GT Ride-On Makes Your Kid The Coolest On The Block