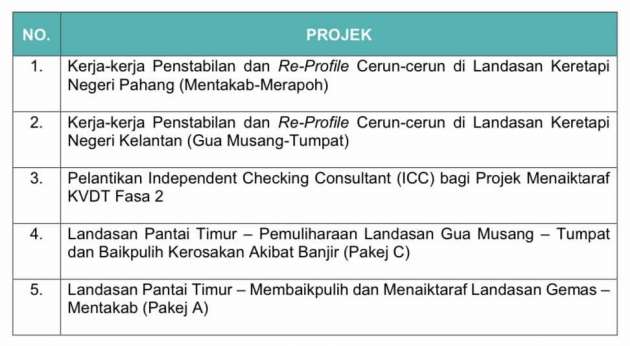 Five projects under the transport ministry (MoT) worth nearly RM650 million, awarded by the previous administration, will now be open for public tender instead. This was announced by new transport minister Anthony Loke yesterday.

In a statement, Loke said that in line with the new government’s stand to no longer award contracts without tender, MoT revised its projects and agreed that five of them – estimated to be worth around RM650 million – will be awarded via open tender or limited tender (tender terhad).

The Seremban MP explained that before this, the five projects concerned have been approved for direct negotiations, but the confirmation letters to seal the deal (Surat Setuju Terima) are yet to be issued by the government. Most of the five projects are rail-related and are in the East Coast. The full list is above.