Electric vehicles pose a unique risk on the road, in that their lithium-ion batteries can catch fire and burn fiercely in an accident. Fighting these fires poses a challenge for emergency responders, which Austrian firm Rosenbauer hopes to solve with its new extinguisher specially designed for the task, as reported by Rideapart.

The system consists of an extinguishing unit which is placed under the target vehicle, and a control unit which can be operated by firefighters from a safe distance, with the two connected by hoses. For cars on their side or roof, the extinguisher unit can be placed on the top of a vehicle, or even in the interior or luggage compartment, in order to best access the battery. Once activated from the control unit, the extinguisher drives a piercing nozzle into the battery pack, allowing it to pump water directly where it’s needed to cool the battery modules or the cells themselves. It’s an effective way to bring the battery temperature down, calming the thermal runaway that makes lithium-ion battery fires so spectacular. 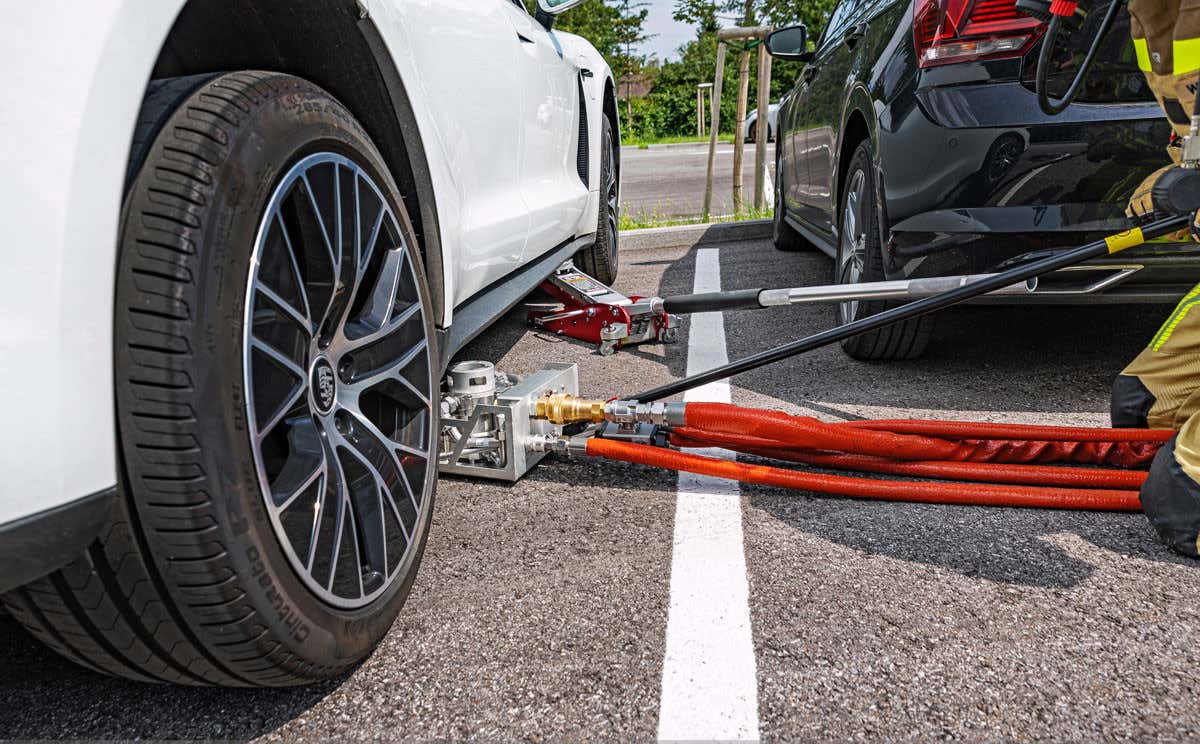 Being able to directly fill the battery with water is a far more efficient way of fighting a battery fire than simply blasting away with a hose from the outside. Rosenbauer notes that this has multiple benefits, allowing crews to put out EV fires more quickly, while also reducing the amount of harmful smoke and gases released along the way. The system also allows firefighters to remain at a safe distance, 25 feet away from the vehicle, operating the control unit rather than having to hold a hose.

The extinguishing unit can also be left attached to the vehicle during transport, once the fire has been put out. Damaged batteries can sometimes catch fire again after initially being extinguished, so having the unit still attached allows more water to be pumped into the battery if necessary at a later time.

The system has been tested in partnership with several organizations to ensure the hardware is fit for service. Patrick Looß, head of the Securitas Fire and Safety department in Leipzig, Germany, noted that “The extinguishing system is currently one of the best and most innovative of its kind to contain the spread of battery fires. Operation is very user-friendly and effective. From my point of view, the system is a must-have for every fire department.”

Expect to see this and other similar solutions become popular with fire departments as more electric cars get on the road. Alternatively, if solid-state batteries ever go mainstream, their lower flammability could also go a long way to solving the fire issue. Until then, however, fire crews around the world will need to be prepared to deal with battery fires, and gear like this goes a long way to helping in those situations.