marcussantiago recently shared this with other BHPians.

Took it to the service center, it seemed okay on the ride home but the problem surfaced the next day. Took it back several times. I’m no mechanical genius but I figure the issue is with the fueling, maybe a clogged fuel line or such. It runs fine at higher speeds or when you open up the throttle, but stalls and sputters in traffic. Really weird behaviour for a brand new bike.

Here’s a quick montage of the stalling. Note the speeds, and also understand that it stalls when I have the clutch pulled in.

So three trips to the service center (and some missed work) and the problem persisted.

I called up the showroom where I bought the bike from and explained my issue. They said they’d have someone call me back and make everything right, but nobody called. I even reached out to a senior sales manager who did the same thing.

Now I’m a generally polite guy who doesn’t like to make a fuss, so I really didn’t want to opt for the “nuclear option” of taking to social media and shaming the company. So I opted for one last try by DMing them on their official Instagram. Explained the problem, they said they’d get back to me, and again, nothing happened after that.

Finally, I posted it on Twitter. I haven’t really used the account in ages so admittedly I don’t have a huge following or anything, but I was expecting at least a boiler plate “sorry for the inconvenience, we’ll contact you” like with Instagram but not even that. 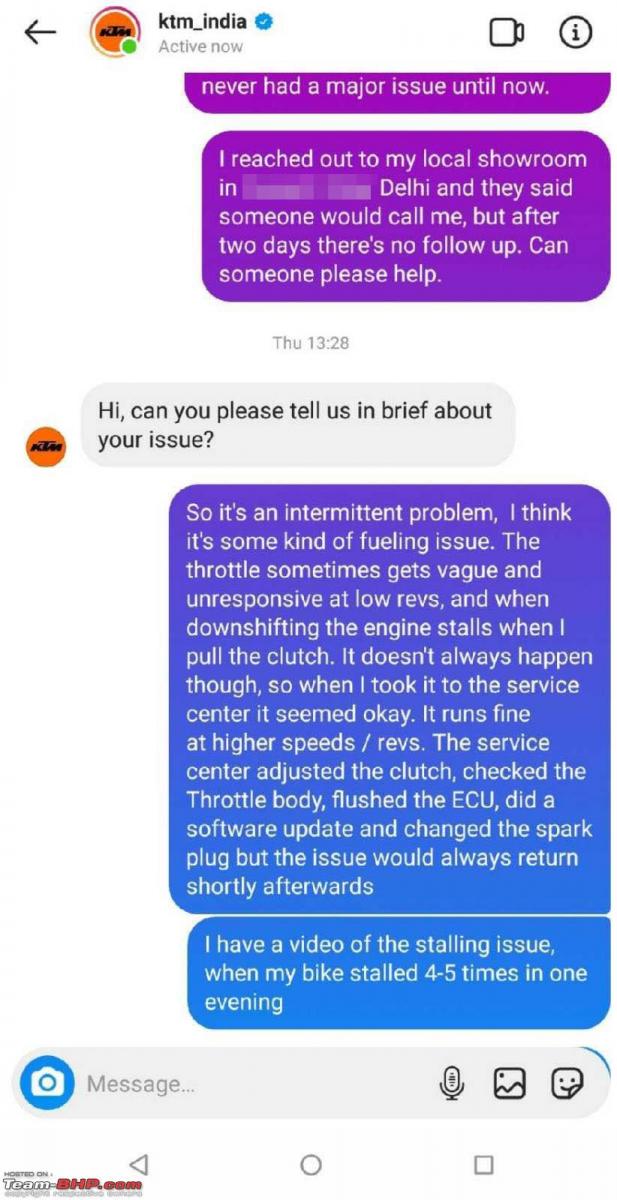 Anyway, since KTM can’t be bothered, my bike is now with a private mechanic who I used to go to for service and repairs for my 4-year-old Duke.

I’m quite disheartened because I’ve had generally good experiences with KTM over the last several years. I’m an enthusiastic supporter and encouraged friends to go for a KTM rather than a Harley or Kawasaki etc., telling them how my experiences with KTM have been almost all positive. My riding buddies tease me sometimes for being such an orange fanboy (I even had a couple of official KTM jerseys imported just coz I’m an unapologetic fan).

I can’t say what has caused KTM to fall from grace like this. You can check my posting / commenting history to see that I’m not the type to take to the internet and shame a brand over some bad experience. But after praising KTM so much for so many years, I think it’s fair that people should know that things have changed. I don’t know whether this is some kind of Bajaj-ification economies-of-scale nonsense, where KTM service centres are pressured to rush their work and have bikes go in and out as quickly as possible, and mechanics are pressured into simply replacing parts and rushing to the next bike in the queue rather than actually diagnosing problems properly and thoroughly, I can’t say.

All I know is, this is pretty disappointing for a 3 lac bike from an internationally renowned badge.

A friend of mine was filling up on petrol at the pump when a stranger on a Royal Enfield Meteor pulled up beside him. They got talking about the bike and it was quite impressive. Then the guy mentioned that he was returning the bike because after buying it, he noticed the tank had a tiny scratch on it. So Royal Enfield will exchange and replace an entire bike from scratch over a tiny ding on the tank, but KTM won’t return calls to a loyal customer facing an issue that shouldn’t exist on a four-month-old bike?

Next week I’ll be leading my small MC here on a weekend trip to Dehradun and Massourie (sp). The bike does actually run, just not that well. So I could probably make the trip without any major issues.

But once I return to Delhi I’m definitely selling it for something else. Which is annoying for obvious reasons, mainly that I simply wasn’t planning on buying a new bike so soon. Current candidates include the new Ninja 300, the BMW 310R, the RE Interceptor 650, and optionally maybe even a Dominar 400.

So… if you’re being tempted by a KTM, be warned. This is an ownership thread, after all, and I’ve owned not one but two Duke 390s, so perhaps you should be aware of what you’re possibly getting into if you go down this road.

Here’s what BHPian rahul4321 had to say on the matter:

This is from my review – Bike Stalls at low speeds – when I downshift from 6th to 1st or 5th to 2nd to navigate a pothole.

It drove me mad and I had a Maruti Dzire rear end me because he saw me wringing the throttle after a sharp 1st gear speed bump and thought I’d have power to ride away but the engine had already shut off.

The guys scanned the bike for an error Code – found one related to the clutch and accelerator which just wouldn’t go away. They kept erasing it and each time I drove away from the service station, the same problem occurred and when connected to their scanner, the same error code would show up again.

They replaced a clutch switch or something similar – under warranty and fixed it for good. I haven’t had the problem reoccur since then – more than a year now.