I’m told that mine was the first billed & dispatched Petrol MT 6 seater Z8L that left from Chakan as it is an extremely rare combination.

BHPian Shrey1230 recently shared this with other enthusiasts.

The Tale of Bagheera — An ode to the Mahindra Scorpio

Hello everyone, I am creating this post to tell the story about how my love for cars started and especially how the Mahindra Scorpio holds a key place in that & now that I am finally a proud owner of one after dreaming of it for almost 2 decades I felt it is the best time to pen down the journey that was just surreal.

Where the story all began…

So like most of us here, I have been into cars ever since I was a very young kid and just like every car guy I too have that one car that got me reeled into the beautiful world of cars and for me, it was the Mahindra Scorpio – I know it sounds odd as most others used to fanboy for the usual poster cars from the yesteryears like the Murci or the 360 Modena and don’t get me wrong, I was truly a fan of those too, but it was just something about the Scorpio that spoke to me.

I still remember the first time I saw a Scorpio, it was circa 2003 when my father’s very near and dear friend (he is also a great fan of the Scorpio moniker and has owned every generation of it at some point) who had recently opened a Mahindra workshop bought a Toreador Red Scorpio. It was the first time I laid my eyes on a Scorpio and boy was I hooked. I remember the sheen of the beautiful Maroon shade (this is from where my love for Maroon cars can be traced back. I have owned a 2010 Fire Brick Red Wagon R & a 2020 Auburn Red XL6, both of which were in great shades of Maroon) and the sheer imposing presence the Scorpio carried and back in the early 2000s there was nothing like this on the roads. Everything used to look like small matchboxes when parked next to this behemoth.

I remember the first time I climbed into the Scorpio, as a kid it felt like summiting a mountain, I remember the beautiful interiors and massive width of the dashboard, I absolutely loved the grab handle for the front passenger, it added so much further character to the SUV. We used to own an Alto VXi 1.1 back in those days (that unicorn deserves a post on itself, but some other day) and coming from that, the Scorpio felt like a tank.

Over the course of many years I traveled a lot in this Scorpio, it was the very reason my love for cars grew and I used to be so excited to visit the workshop as I used to get to see so many Scorpios in the same place and that was heaven to me. I literally had a scale model collection of Scorpios in all the shades, no matter how old I get and how many cars come and go, but for me that Toreador Red Scorpio will hold the most value as for me that will be the car that made it all happen. The interiors of the 1st Generation Scorpio Fast forward 4 years and the same friend of my father’s had gotten the new facelifted Scorpio with the spanking brand new CRDe engine in the Diamond white shade. And in this car I traveled the most, both of our families traveled to the lengths and breaths of this country in that powerful yet elegant SUV.

Even though I was still a kid with a lot to learn about cars but still the differences from the last gen to this one were clearly noticeable, the looks were so much enhanced, especially the hood scoop and long tail-lights and most importantly the little marks in the speedo which indicated the speed in MPH looked so cool! The engine and NVH were drastically improved but what was retained was the butch styling and the command that the SUV carried over all the cars around it. I also do fondly remember the advertisements that Mahindra used to run, the “nothing else will do” campaign was a great success and I remember how well the sales started rolling for the Scorpio after it. 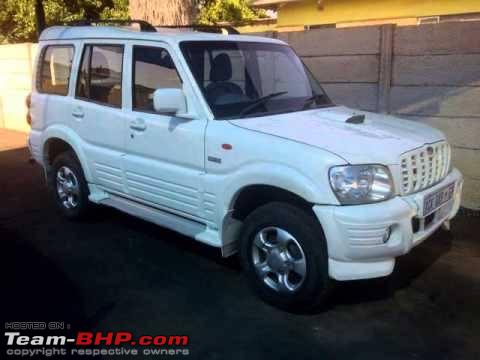 Notice the MPH marker on the speedo As you might have guessed, in the year 2011 the Diamond White Scorpio was upgraded with the “Mighty Muscular Scorpio” in the Fiery Black shade. The now famed mHawk 2.2 was mated with this iteration back in 2009. Although it didn’t have much more power over the CRDe one with merely a couple of BHP gains making 118 from the 116, it did have the new Aluminium block and a functional hood-scoop to feed air to the top-mounted intercooler.

I remember the first time I climbed onto this gen, I was surprised by the gizmos right from the steering mounted controls to the cruise control and the HU was also very well equipped, although I was a bit sad, as the top VLX trim did not have the grab handle I loved in the previous gens, at the same time it was for a good cause as it had an airbag module in its place which with the added benefit of ABS was a big deal for an Indian manufacturer to offer way back in 2009 when it was first launched.

Although IMO the second-gen looked the best in terms of exterior design as I feel that by the 3rd gen they overdid it with the front by making it too aggressive but all in all it was still a butch and handsome vehicle on the road. All these years, I tried to convince my father as a young car enthusiast to buy a Scorpio but for him, it was just too rudimentary and utilitarian as a product for his liking, but I kept my dream alive of buying a Scorpio one day, a dream that was still 11 years away. 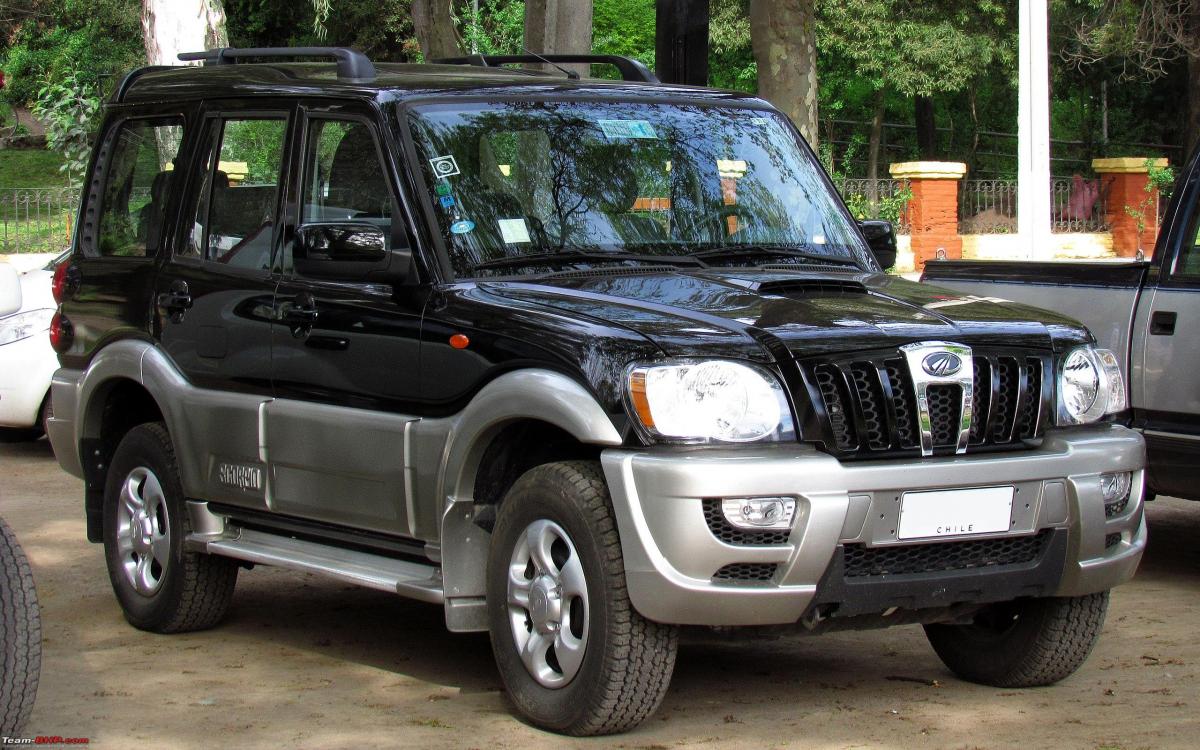 Like every Indian car enthusiast, I was too keenly watching and following the new Scorpio’s spy shots and the sprinkles of information that I was getting through Team-BHP and all over the internet, it looked so promising. Fast forward to 27th June after weeks of teasers; the new Scorpio christened as the Scorpio N is launched. And I must tell you, I was swept away again!

It looked so good and I instantly booked a test drive and informed my known associates at the dealership to send a vehicle to my home for a test drive as soon as the vehicle arrives and within a few days it did. I still remember when I saw the ScorpioN for the first time prancing like a panther coming towards me, I was taken back 19 years when I first saw the original one. And at that moment; even before test-driving the vehicle, I knew I wanted it.

And after a few test drives and a lot of convincing my family approved of the new ScorpioN because of its improved quality and finally the option of a petrol engine again but this time, not a Renault-sourced one but the mStallion which is a gem of an engine as well. I was given the green signal. And like everyone who booked on day 1, I was glued to the screen too and managed to book one in the first 10 seconds but was hit with a Bad Payment Gateway error and it only got through after 10 minutes. Although I didn’t get price protection at first but was shifted to it later on.

My ScorpioN—which I have christened as Bagheera because the first time I saw the ScorpioN it reminded me of a panther and that makes my Napoli Black one a black panther, thus the name; arrived at the dealership on the 20th of September and from what I’m told it was the first billed and dispatched Petrol MT 6 seater Z8L that left from Chakan because it is an extremely rare combination to book as most people opt for the 7 seater.

Anyway, I took delivery on the 4th of October because it was an auspicious day. I was over the moon when I first saw my own ScorpioN! The kid in me was so proud and at the same time so happy that finally, I could check off one thing from the list of things I wanted and dreamed of having as a child. It took almost 2 decades to come true but whenever I step onto my ScorpioN, I feel the rush of excitement and joy!

The car has done about 1800 KMs and with one service done at the time of writing this update. I have already posted a 1400 KMs review on this thread which you can check out. I’ll be adding the new key takeaways that I’ve noticed since here.

Although one might think that due to my history with the brand Scorpio I might give a biased opinion, in that case, one would be wrong. As much as the product holds an emotional value for me it is still a product that everyone will buy with their hard-earned money and being a true petrolhead, even the new ScorpioN has been scrutinised by me. It is an extremely important product for Mahindra & Mahindra, as it’ll further help them cement their position as the dominant SUV maker and further help them expand their horizons by exporting the ScorpioN to the global markets.

For the Indian buyer, one can totally go for the versions on sale and soon the waiting times will drop too making it easier for one to get their vehicles sooner. And for the ones who are waiting for their ScorpioNs to arrive, trust me, it is worth the wait! And the petrol version makes the most sense for the people living in the NCR. I am hoping that the 2023 batch of this SUV will be more sorted after as Mahindra is taking great care while listening to the feedback of new buyers.

Thank you for reading if you’ve made it this far!

Attaching some photos of my Bagheera & also a very iconic photo which I took in the first week of owning the Scorpio N.

All three Generations, All in Black. After the day of delivery I find this angle very imposing Getting some solid fuel economy in city driving