Home » Bugatti Chiron Prototype Retires After 8 Years, 46K Miles and Getting Blasted By a Jet Afterburner

Bugatti Chiron Prototype Retires After 8 Years, 46K Miles and Getting Blasted By a Jet Afterburner

The Bugatti Chiron went on sale in 2016 as one of the fastest production cars in the world. Bugatti aimed to create a well-rounded luxury vehicle that just happened to also be a wildly ferocious hypercar as well, and with everything we’ve seen of the Chiron since, one could easily say they succeeded. Helping them in this quest was Chiron prototype 4-005, with the venerable test mule racking up 45,981 miles in eight years of service. Bugatti has announced that the humble steed will now be retired, sharing details on its triumphs and achievements throughout its storied life.

The car’s designation is simple to decode: “4” stands for prototype, and “005” means that it was the fifth Chiron prototype constructed. The primary role of the 4-005 was to serve as a testbed for the Electrics and Electronics development team. Systems like the HVAC controls, instrument cluster displays, and other features were all developed using the 4-005. This led the prototype to adventures all over the world, with testing aiming to ensure that things like navigation systems, radio and phone systems all worked properly in different countries with different standards. Performance tests were also run to ensure features like the HVAC system could deal with everything from burning desert heat to freezing temperatures in the snow. The concept of the Chiron’s interior was to focus on the driver’s needs, especially when piloting the vehicle in excess of 400km/h. At such high speeds, distractions spell doom. When started with the “speed” key, which enables fully unrestricted performance, the Chiron deactivates all but the most essential screens to enable the driver to focus on what matters most—driving.

To this end, the Chiron eschews a large central infotainment display entirely, with the main displays located in the instrument cluster only.When testing in 4-005 revealed the need to share some data with the passenger, this was integrated into the four smaller screens located within the centrally-mounted HVAC controls instead. It’s a refreshingly pure approach, and one that clearly shows the lessons learned in a heavy testing regime. Rüdiger Warda working on the display hardware in the 4-005 Chiron prototype.

It’s fun to learn about the finer details of user interface development in a modern hypercar—a topic that doesn’t come up much in the face of more prominent discussions of horsepower, top speeds and astronomical purchase prices. There’s notes about font selection and navigation icons, with an eye to making everything as intuitive and simple as possible for the end user. “We discover many of the detail solutions during drives, discuss them within the team, and then realize them, starting with the 4-005,” explains Mark Schröder, who worked on the human machine interface of the Chiron from 2011 onwards.

Bugatti also shared minutiae on the development of the Chiron’s high-fidelity sound system, and even the process of fettling all the car’s dials so they all turn with the same application of torque from the driver’s touch. It’s this level of attention to detail that really makes the difference in interior design at this level of the automotive industry. 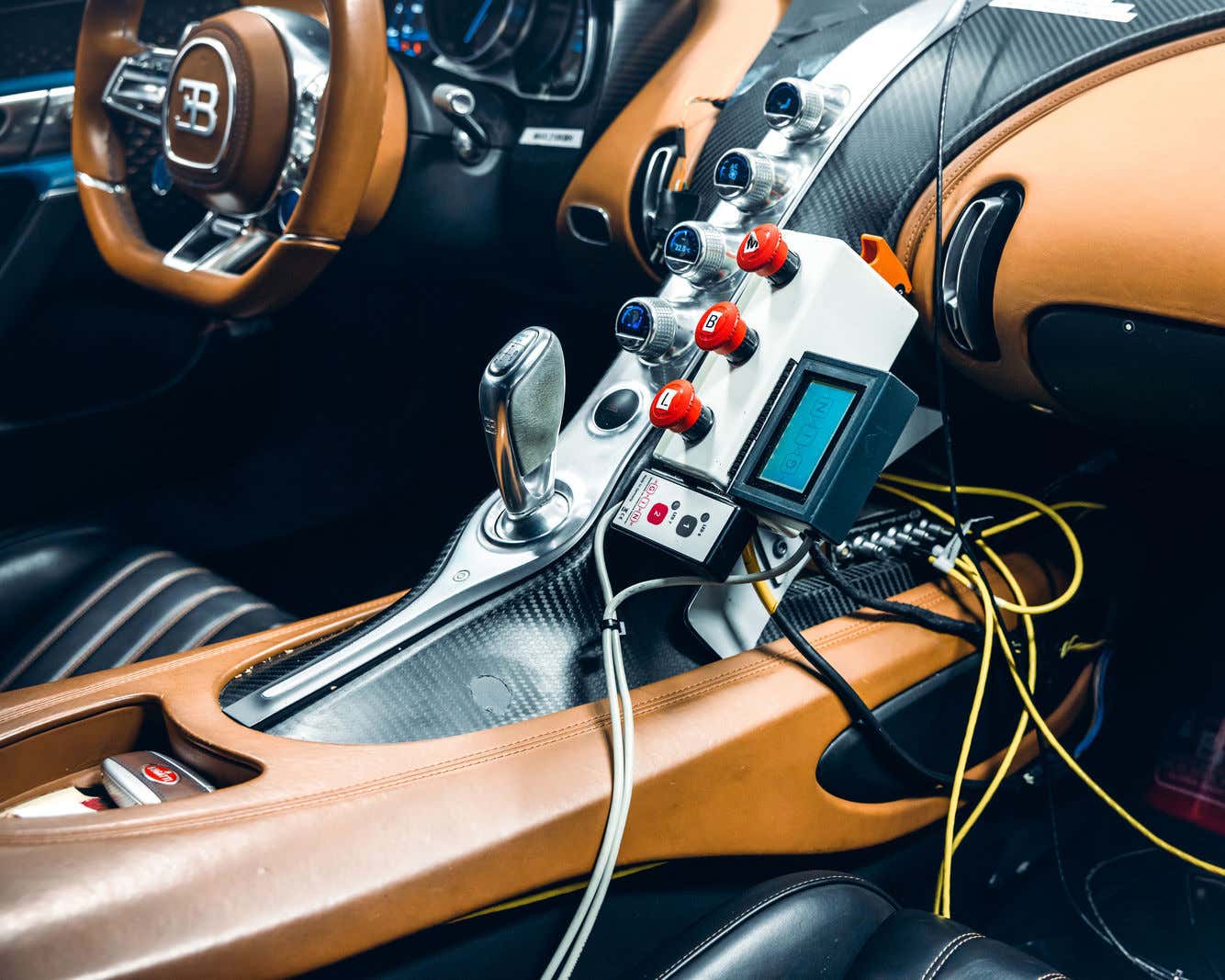 The 4-005 Chiron testbed fitted with a G.i.N. automotive datalogger.

Some of the grander exploits of the 4-005 prototype in its heyday included lapping the high-speed Nardò ring, drifting in the snow in Scandinavia, and apparently even being blast-tested by the afterburner of a Eurofighter Typhoon. To our slight disappointment, none of these accomplishments are backed up by further photos or video, but one can hope that a plucky Bugatti archivist might release more gems in future.

It’s great to see behind the curtain, and it only leaves us wanting a deeper look at the development of one of the fastest hypercars ever built.