Toyota has dropped an all-new Tundra for the 2022 model year, and the company is very excited to get to selling its new trucks. Naturally, a new Tundra also means a new Tundra TRD Pro, and Toyota is particularly keen to show off its range-topping model. Thus, factory tuning house Toyota Racing Development (TRD) whipped up a special Desert Chase Tundra for this year’s SEMA Show.

Rather than being an all-out desert race vehicle, the build is intended to be a chase vehicle that would serve in a supporting role for off-road events. Races like the Baja 1000 typically happen in remote deserts and other areas far from roads and infrastructure. Thus, team personnel have to trail their race vehicles along the course in order to step in when rescue or repairs are required. They often field highly-capable vehicles of their own in order to do this task, and that’s exactly what the TRD Desert Chase Tundra aims to be.

The build is based on the 2022 Tundra TRD Pro, packing the stock 3.5-liter twin-turbocharged V6 and hybrid system good for 437 horsepower and 583 lb-ft of torque. It’s paired with the standard ten-speed automatic transmission. The real changes are to the suspension, with TRD designing a special long-travel setup that still fits the Tundra’s standard mounting points. The upgrades should help the truck soak up big bumps more easily, and the anodized-red lower control arms also do a lot to improve the truck’s aesthetic, too. A wide body kit is also on hand to provide a suitably-aggressive look, and may help some fall in love with what has thus far been a controversial design. However, it’s really there to stuff in the 37-inch Grabber X3 all-terrains from General Tire. They’re fitted to 18-inch forged aluminum wheels which help save some unsprung weight.

Lights from Rigid Industries adorn the vehicle, with a light bar up front and side and rear lamps fitted as well. It’s a useful feature for night races, where extra lighting comes in handy when working in the desert darkness. The front light bar can even be raised for better vision and lowered for less wind noise and lower drag. 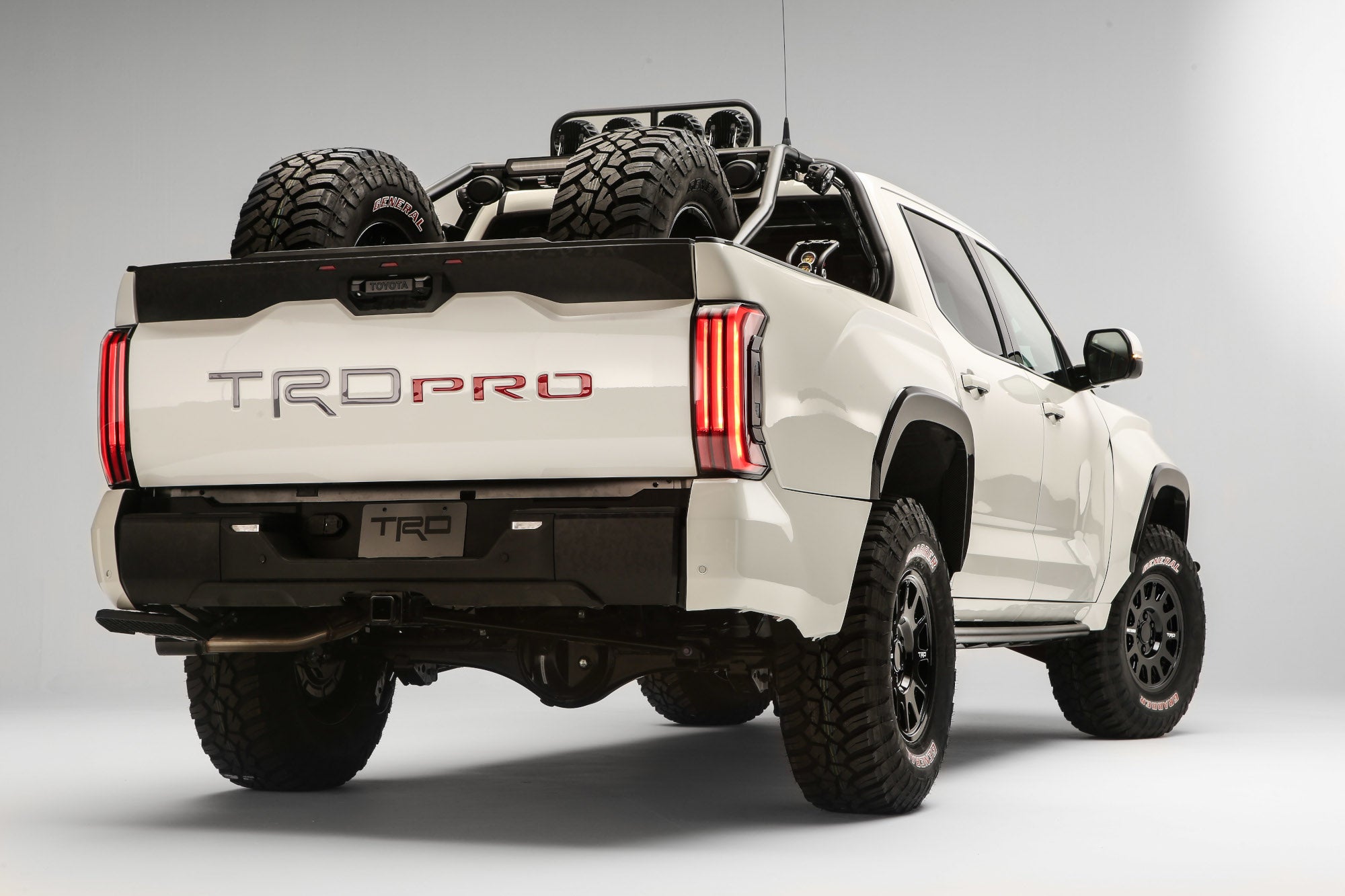 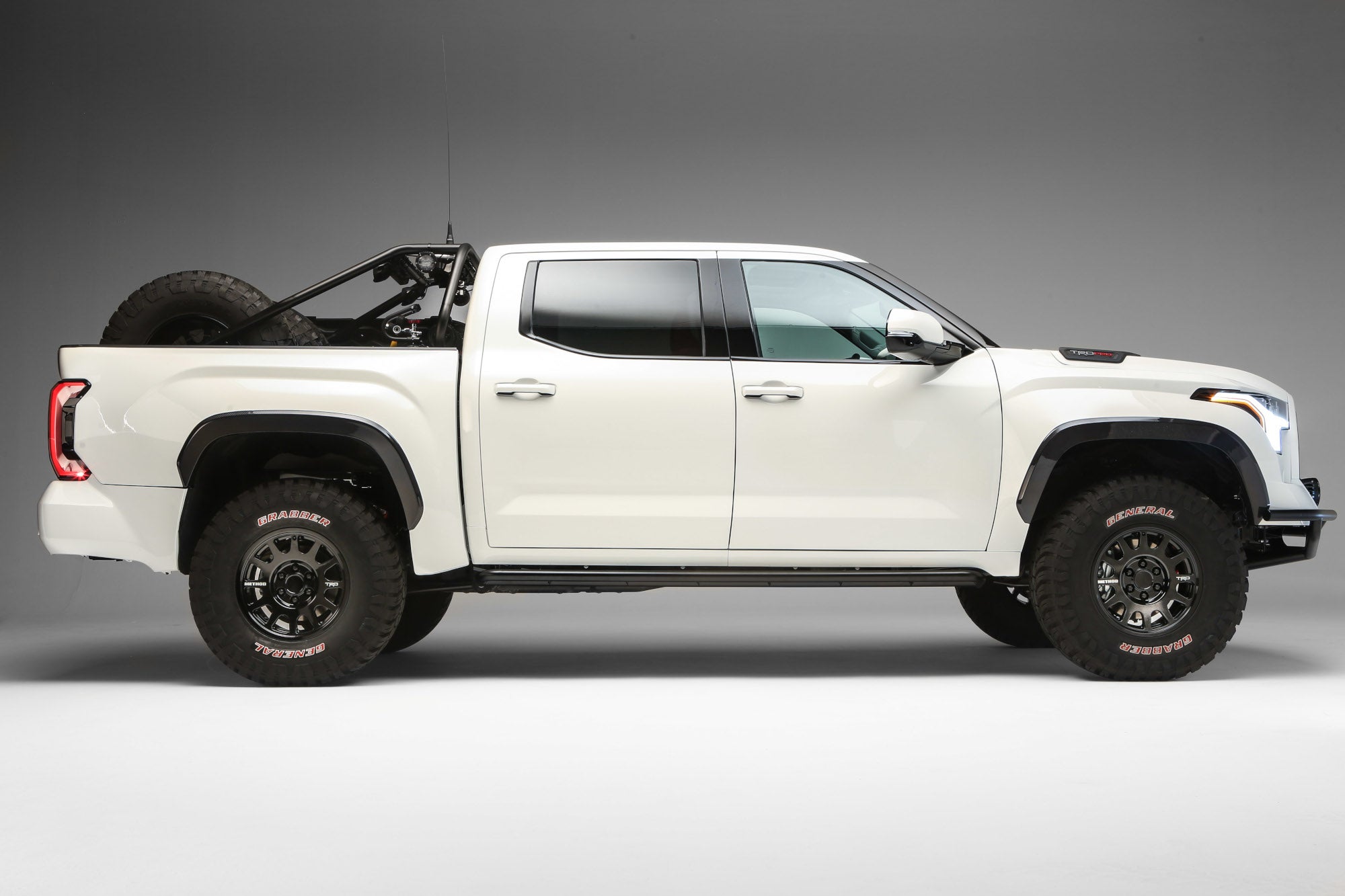 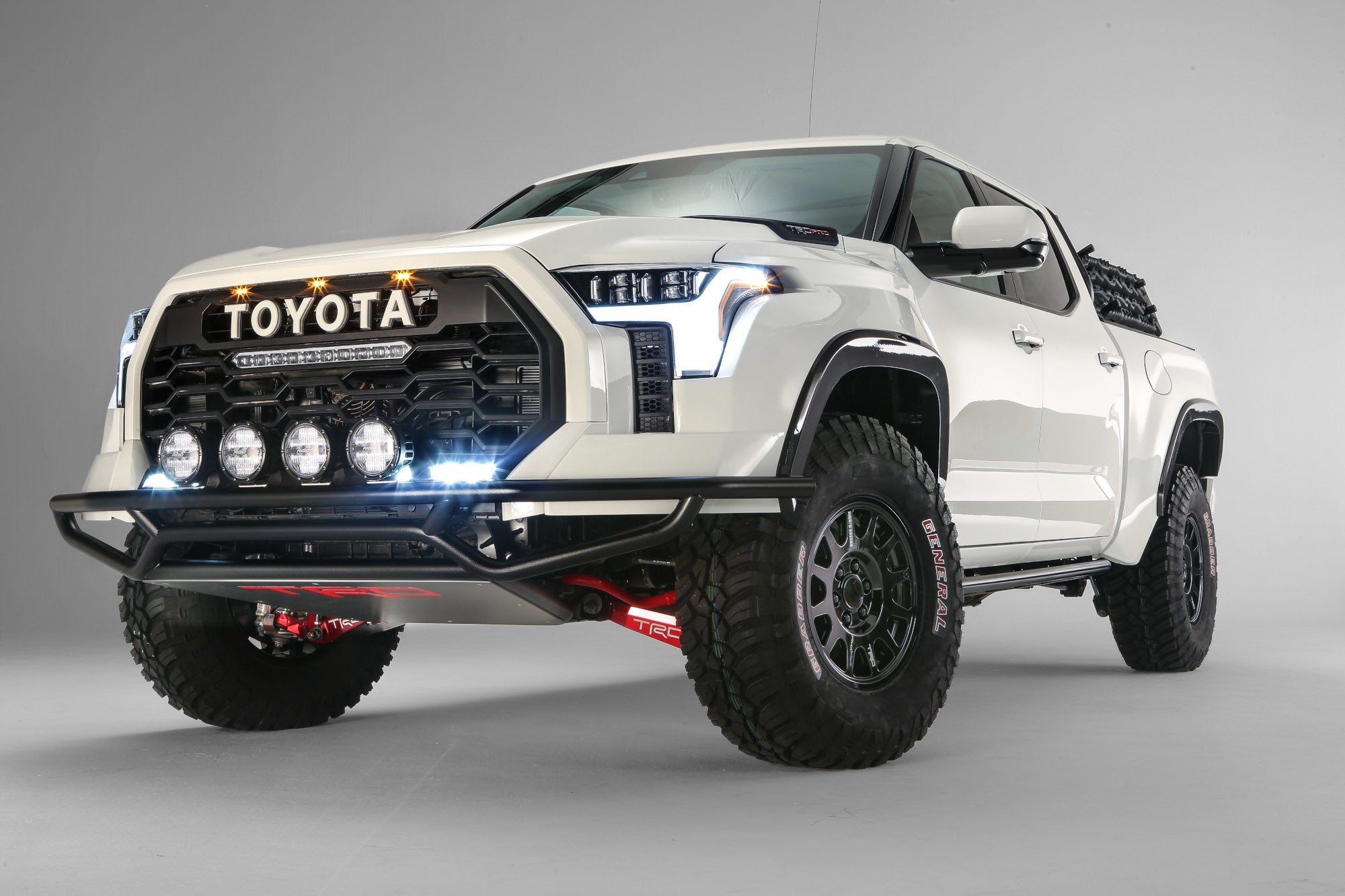 As a support vehicle, the bed is loaded up with gear for off-road competition. There’s a off-road jack, cans of fuel and water, and a 15 lb CO2 bottle for filling tires or running air tools. Two spare tires mount to the custom roll bar, and a set of ARB recovery treads complete the load out.

Like many builds seen at SEMA, the TRD Desert Chase Tundra isn’t exactly road-ready. Toyota’s own press release notes, down in the small print, that the “Vehicle is a special protype [sic] project vehicle modified with non-genuine parts and accessories that may make the vehicle illegal to operate.” Indeed, it serves to show what can be done with the new Tundra TRD Pro, even if it’s not something Toyota aims to bring to market directly. 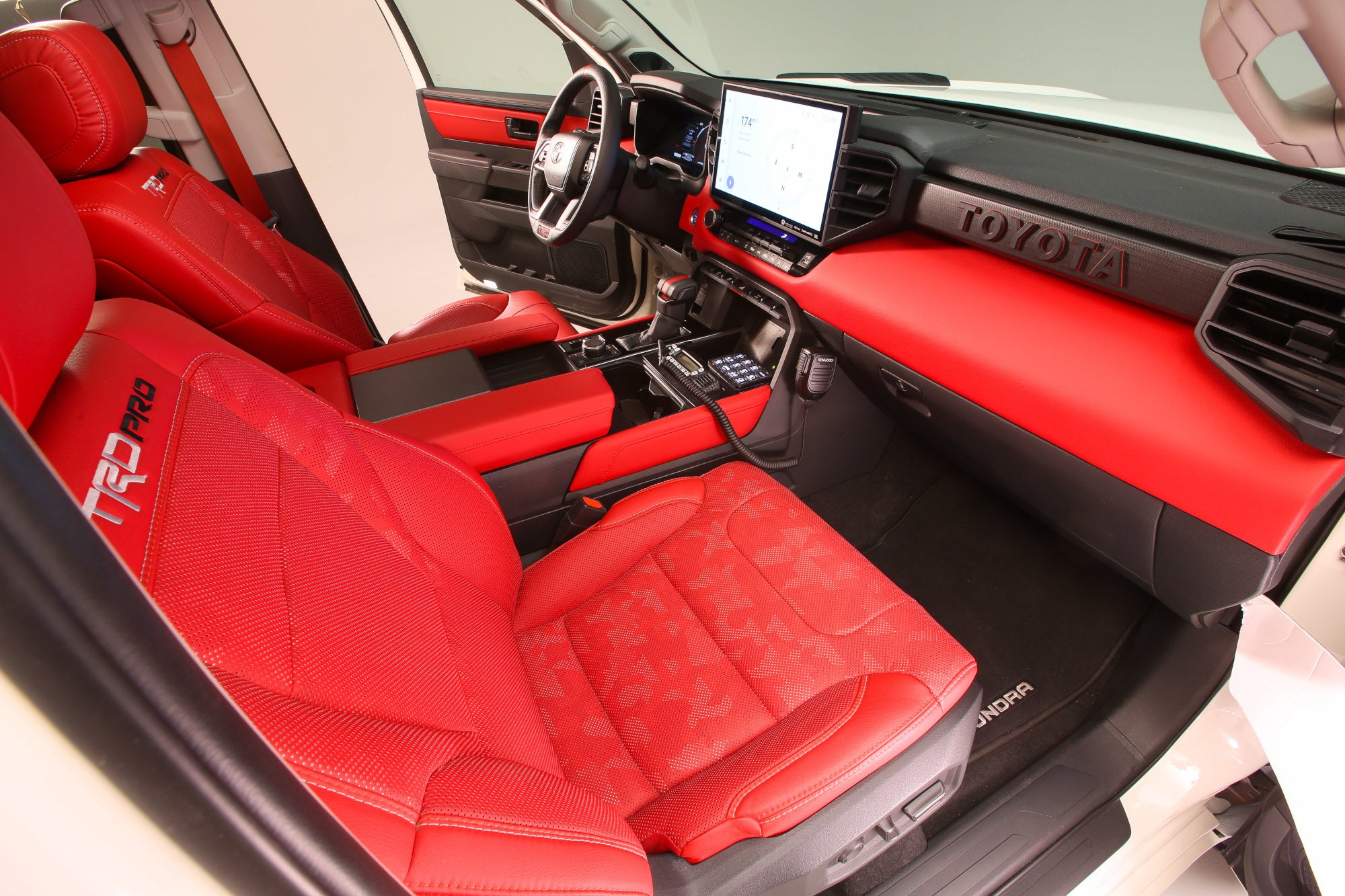 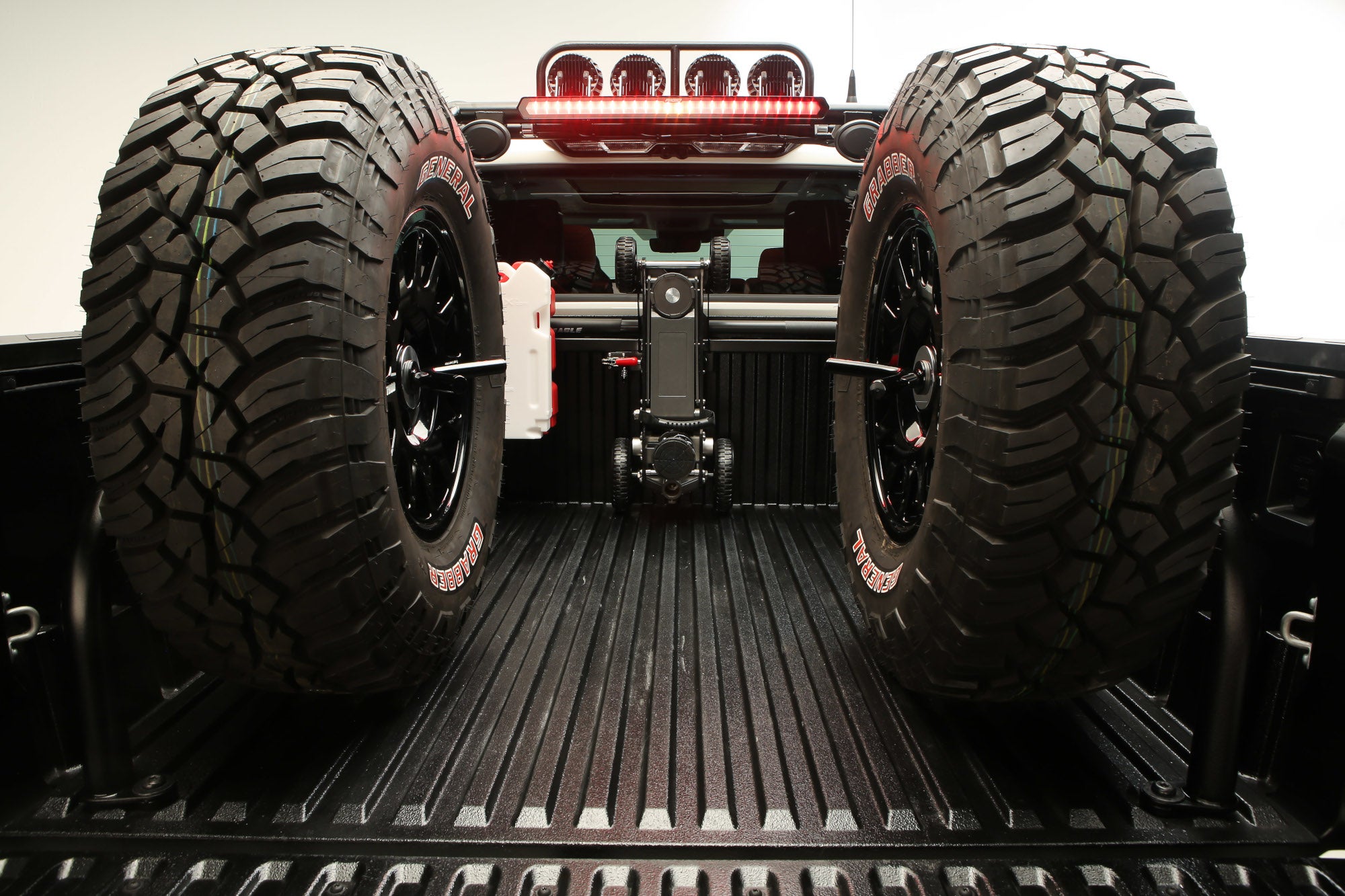 Regardless, for those looking for a pre-runner or a race support vehicle could do worse than a Tundra TRD Pro. Fundamentally, it can handle driving off-road just fine, and it’s got a bed and body that can be loaded up with all the tools and equipment you’ll need. Toyota’s TRD Desert Chase Tundra is just a fun way to remind you what’s possible.