Enthusiasts like to whine about how bespoke, gas-powered sports cars are allegedly dying off. Manufacturers supposedly aren’t making ’em anymore, and when they do, they’re either joint-venture Franken-cars or sullied by passionless electricity. Well, it looks like Mercedes is joining Chevy in throwing big ol’ wrenches into that narrative with the 2022 Mercedes-AMG SL: a truly all-new, V8 convertible sports car built by AMG proper.

As the first new SL in almost a decade, Merc’s latest 2+2 shakes things up in more ways than one. For starters, the 2022 SL will come exclusively—and for the first time—with all-wheel drive. Secondly, the company says this redesigned, AMG-only SL represents a repositioning for the model as more of an athletic sports car akin to the Porsche 911 rather than the Jag XK-rivaling, long-legged grand tourer it used to be (although I’m sure it’ll work fine over long distances anyhow). And while the last-gen SL used a retractable hardtop, this new car is soft-top-only. 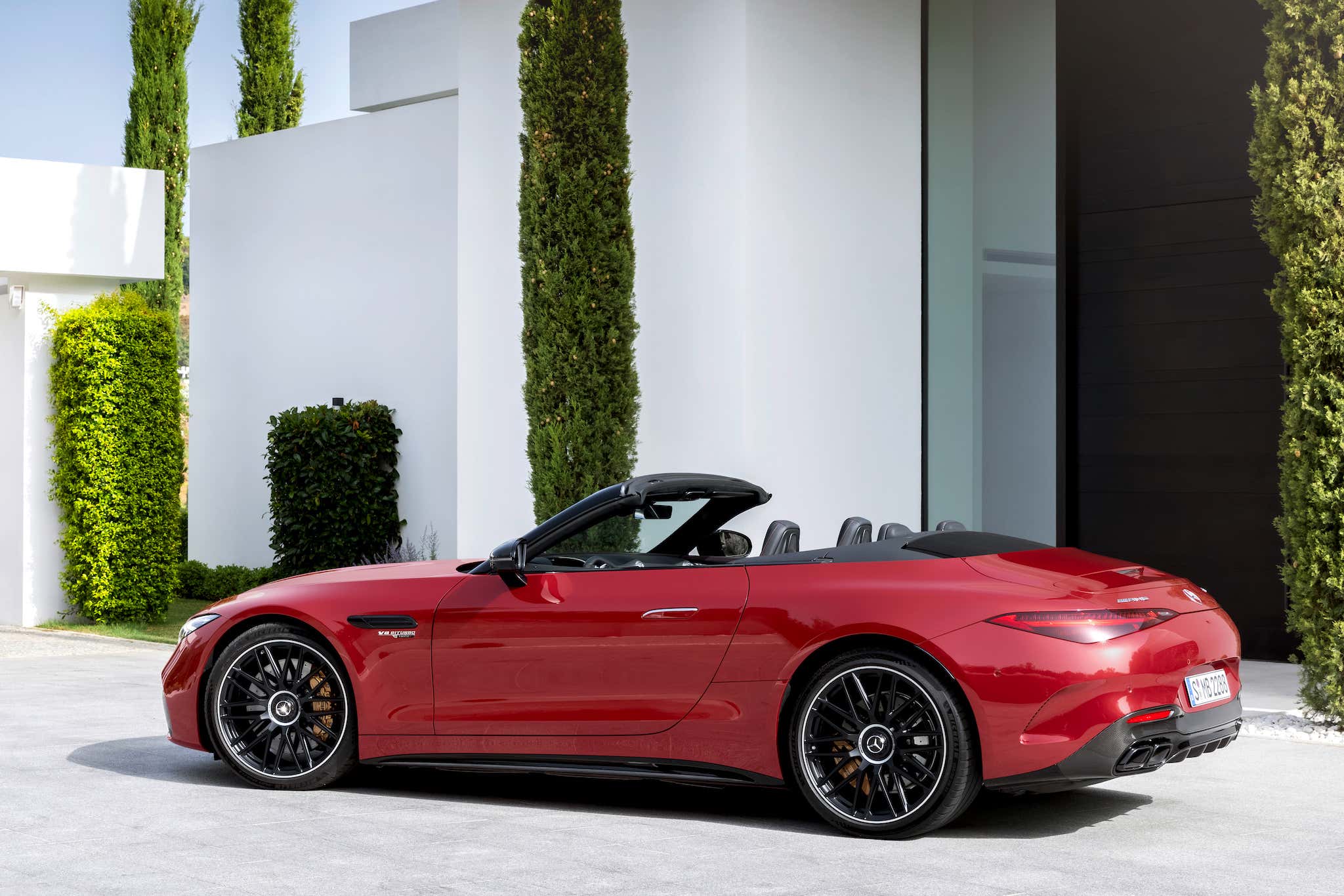 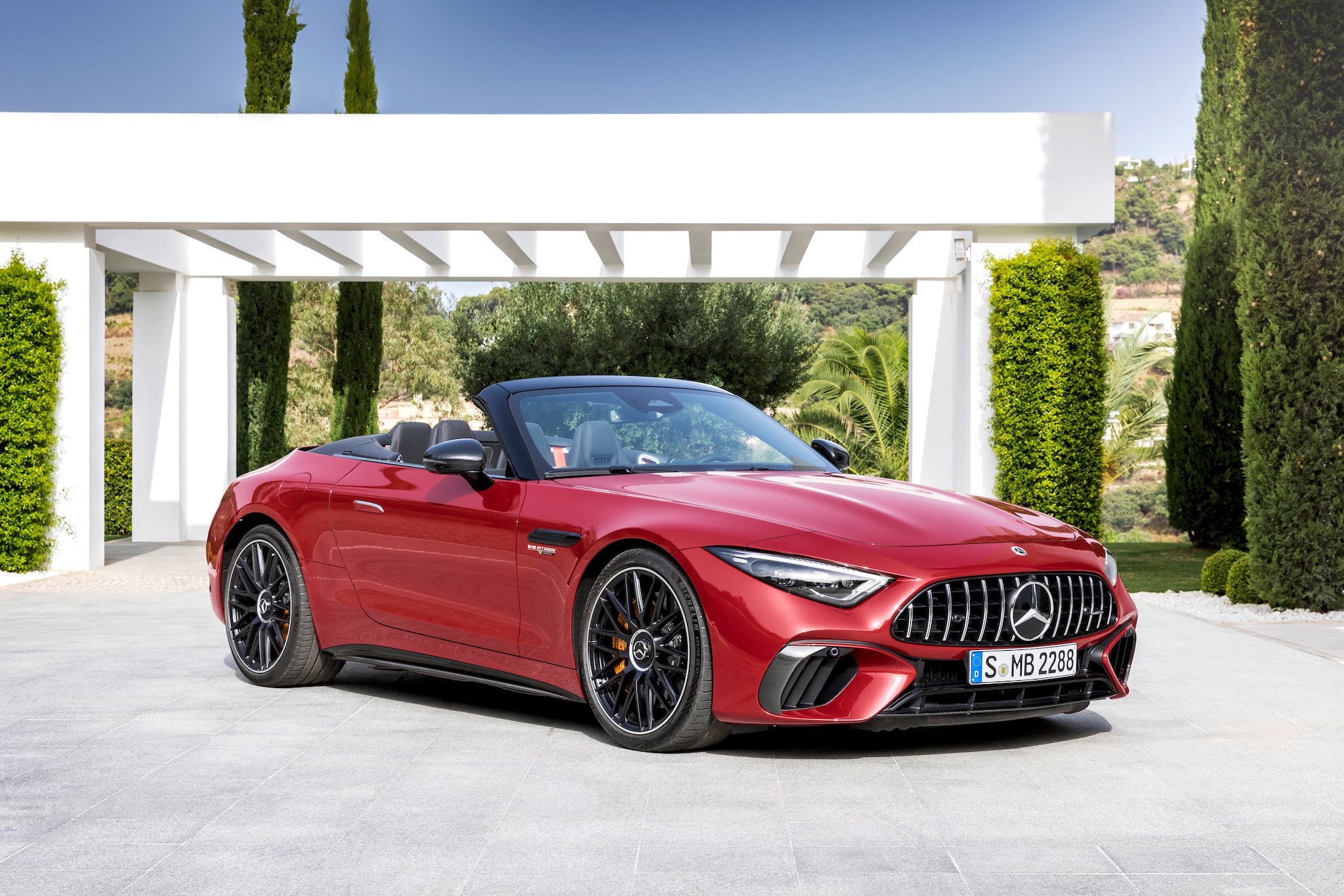 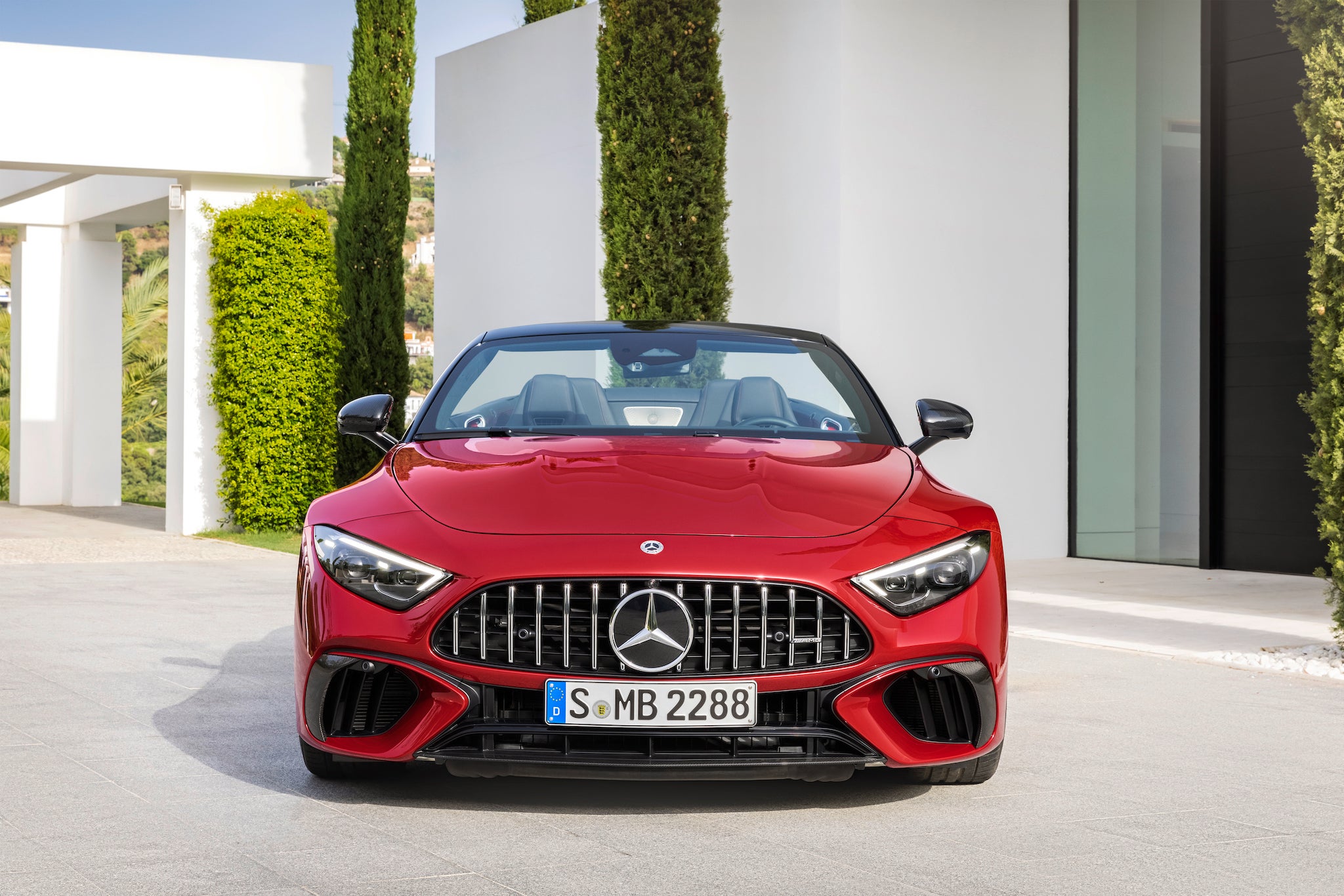 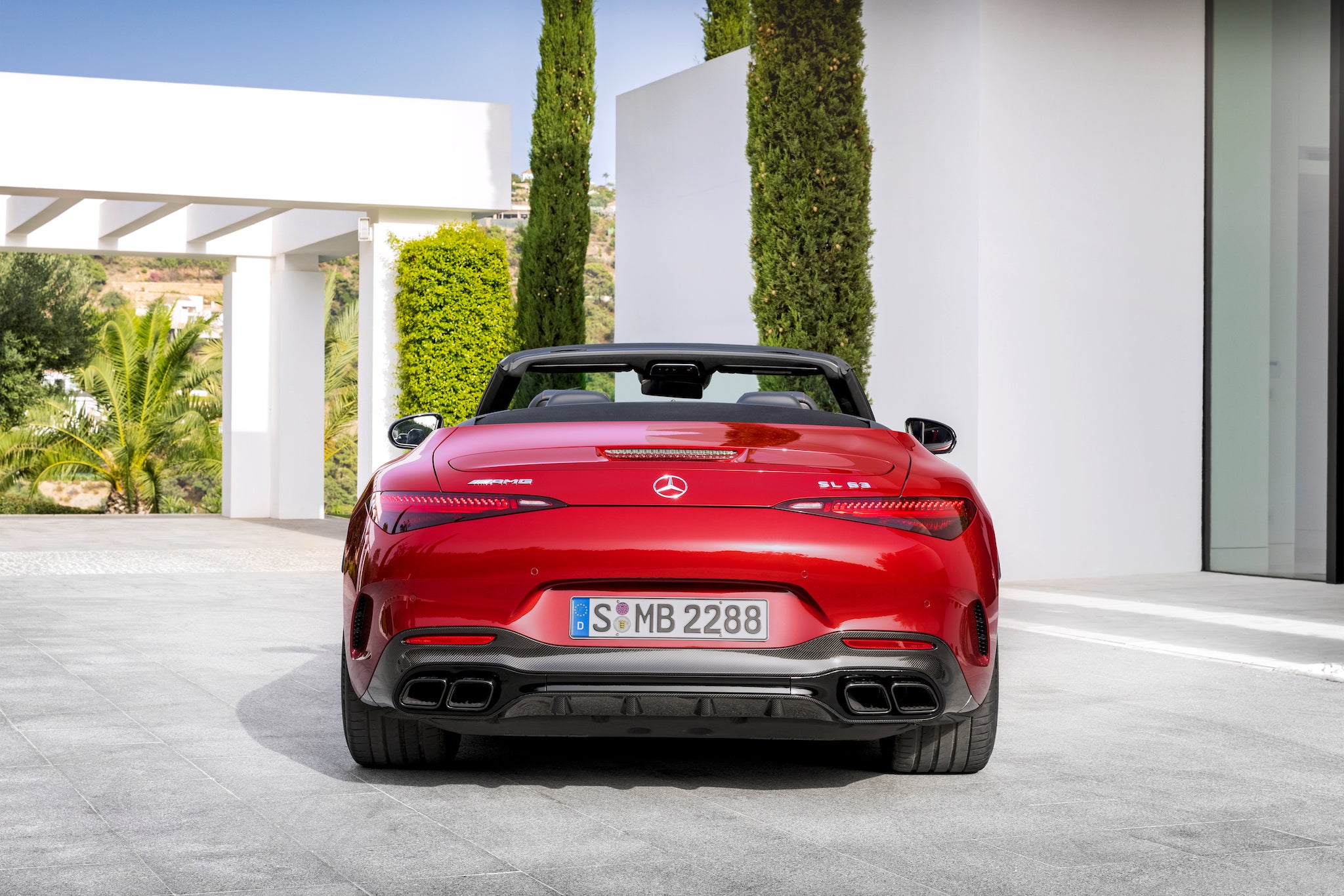 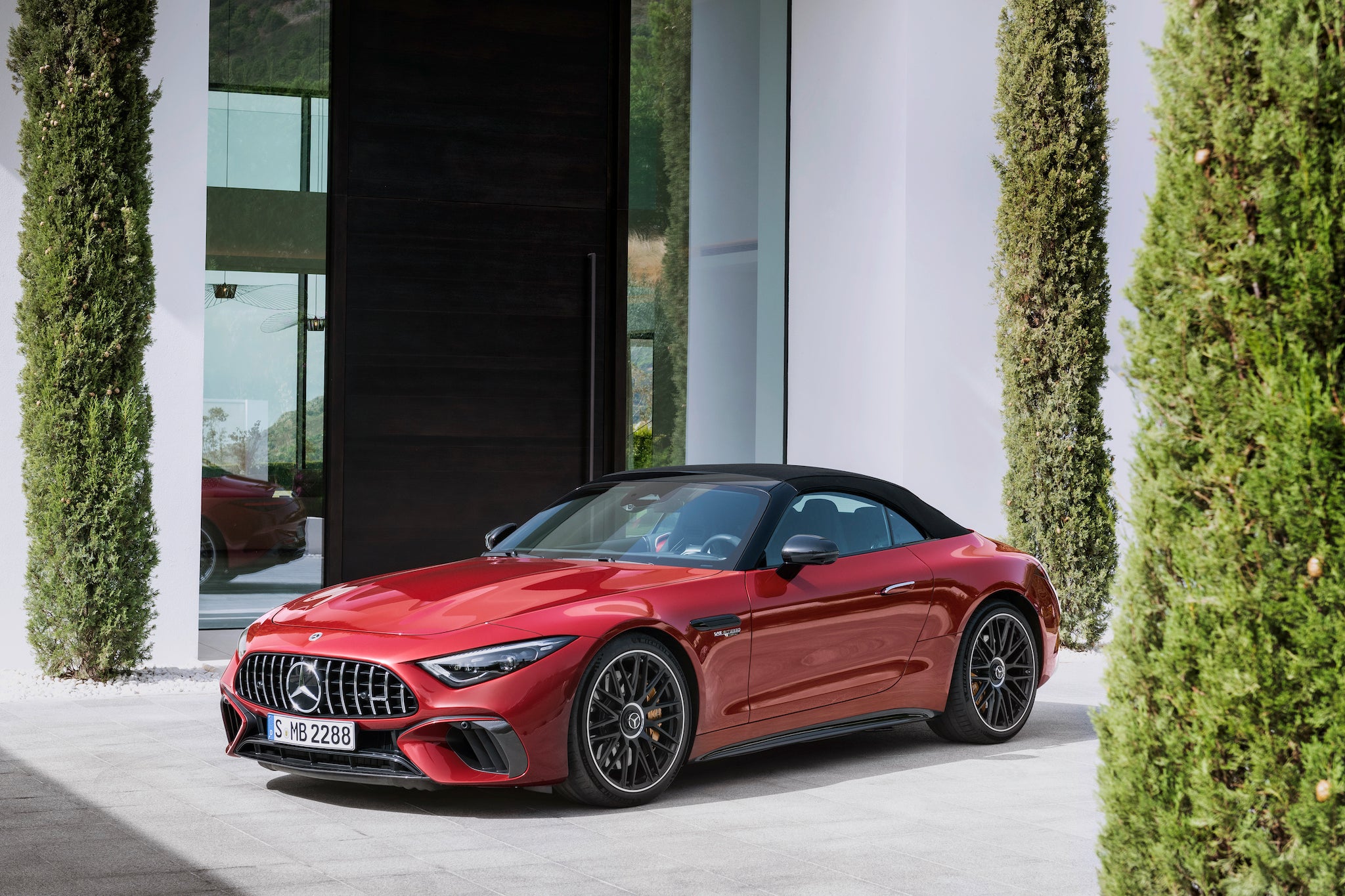 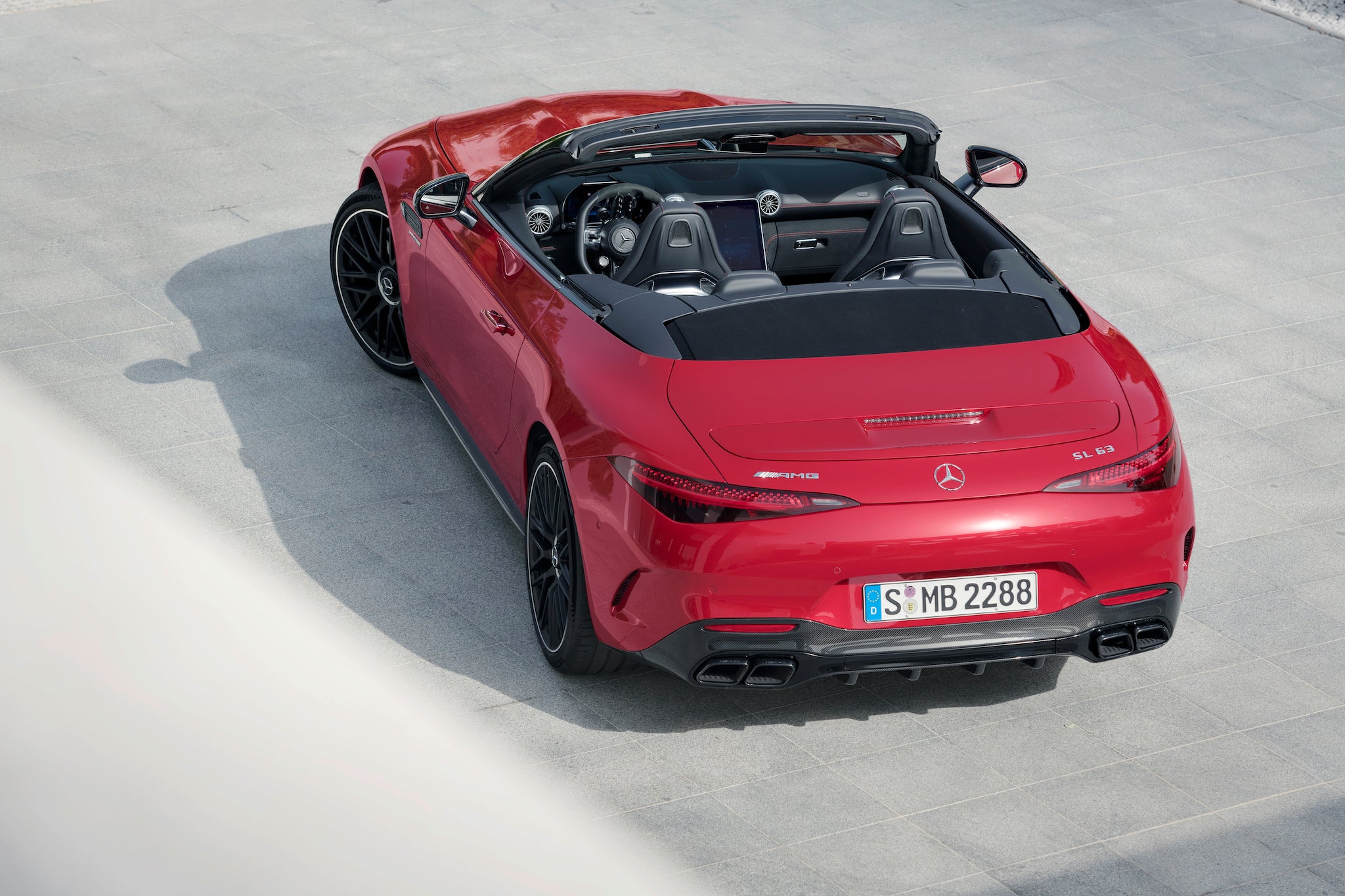 Styling is, of course, subjective but if you ask me, this might very well be the best-looking car in Merc’s entire lineup right now. It’s aggressive and elegant and punchy and really quite cool. Visually, the new SL’s more sports car-like proportions may trick you into thinking it has shrunk but it has actually grown by a few inches in pretty much every dimension.

Powering this presumably more agile-albeit-bigger SL is AMG’s ubiquitous M177 4.0-liter, twin-turbo V8. Propelling both Mercedes-AMG SL 55 and SL 63 models that will be available at launch, the engine will make 469 horsepower and 516 pound-feet of torque in the former, and be good for 577 hp and 590 pound-feet in the latter. The mill receives a new oil pan, repositioned intercoolers, and active crankcase ventilation, plus it’s paired to a nine-speed multi-clutch automatic with a wet start-off clutch in lieu of a torque converter. With the two models using the same V8, the 63’s higher output was said to be achieved via higher boost pressure, more air flow, and, of course, ECU tuning. 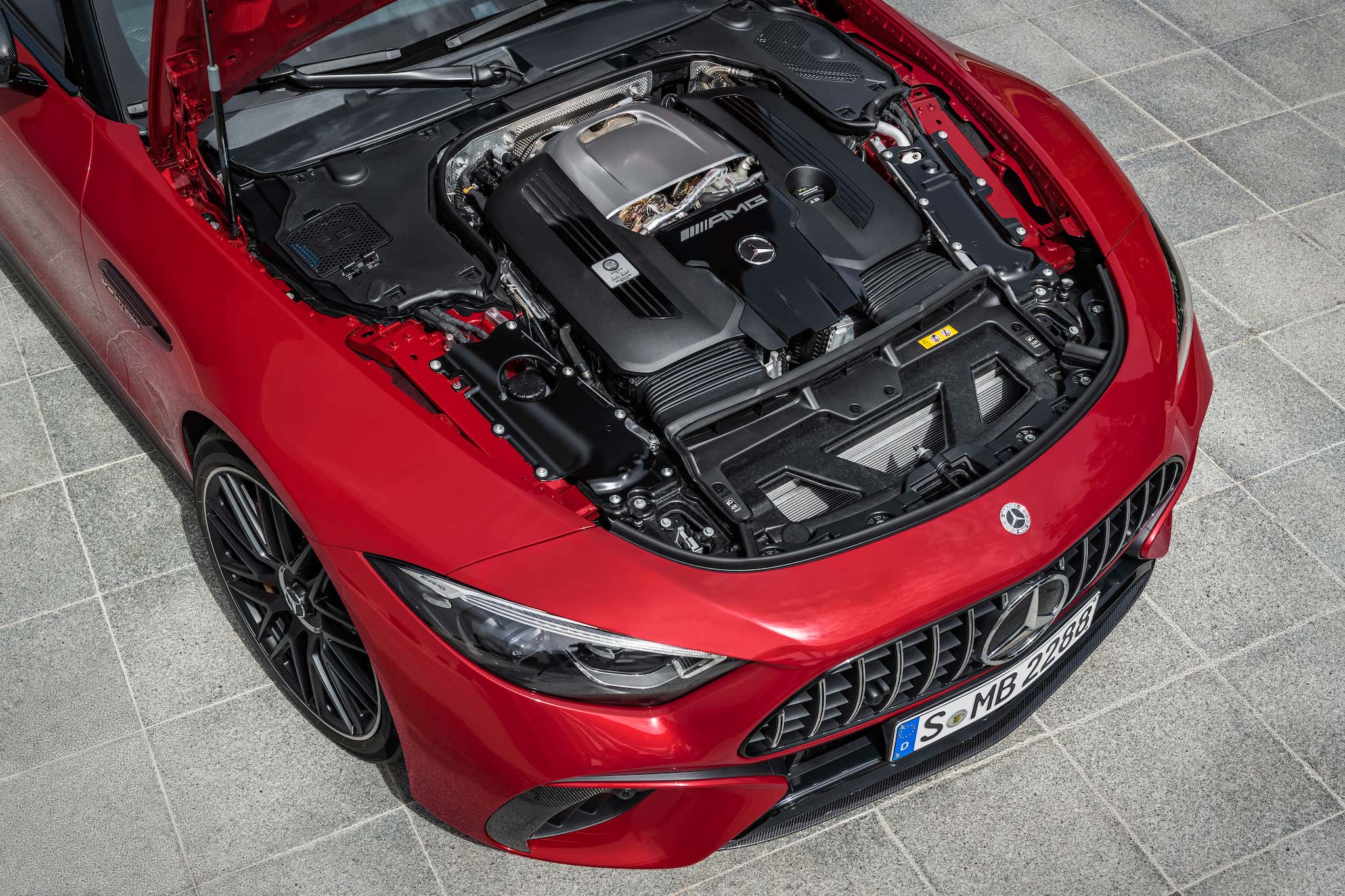 Merc says the SL 55 gets from zero to 60 miles per hour in 3.8 seconds and is positioned against Porsche’s 911 Carrera 4S while the SL 63 hits 60 in 3.5 seconds and should be considered in the same fight class as the 911 Turbo. SL buyers looking for more efficient speed can look forward to an AMG E Performance hybrid version slated to come “at a later date.”

When it comes to body and chassis, it sounds like Mercedes has really done the work here. Developed entirely by the AMG team in Affalterbach, the new SL is a literal clean-sheet design, with a body that shares precisely zero parts from the previous SL or indeed any other Mercedes product. It’s all built around a new lightweight composite aluminum chassis boasting 18 percent higher torsional rigidity over the last SL and transverse rigidity 50 percent higher than that of the AMG GT Roadster. 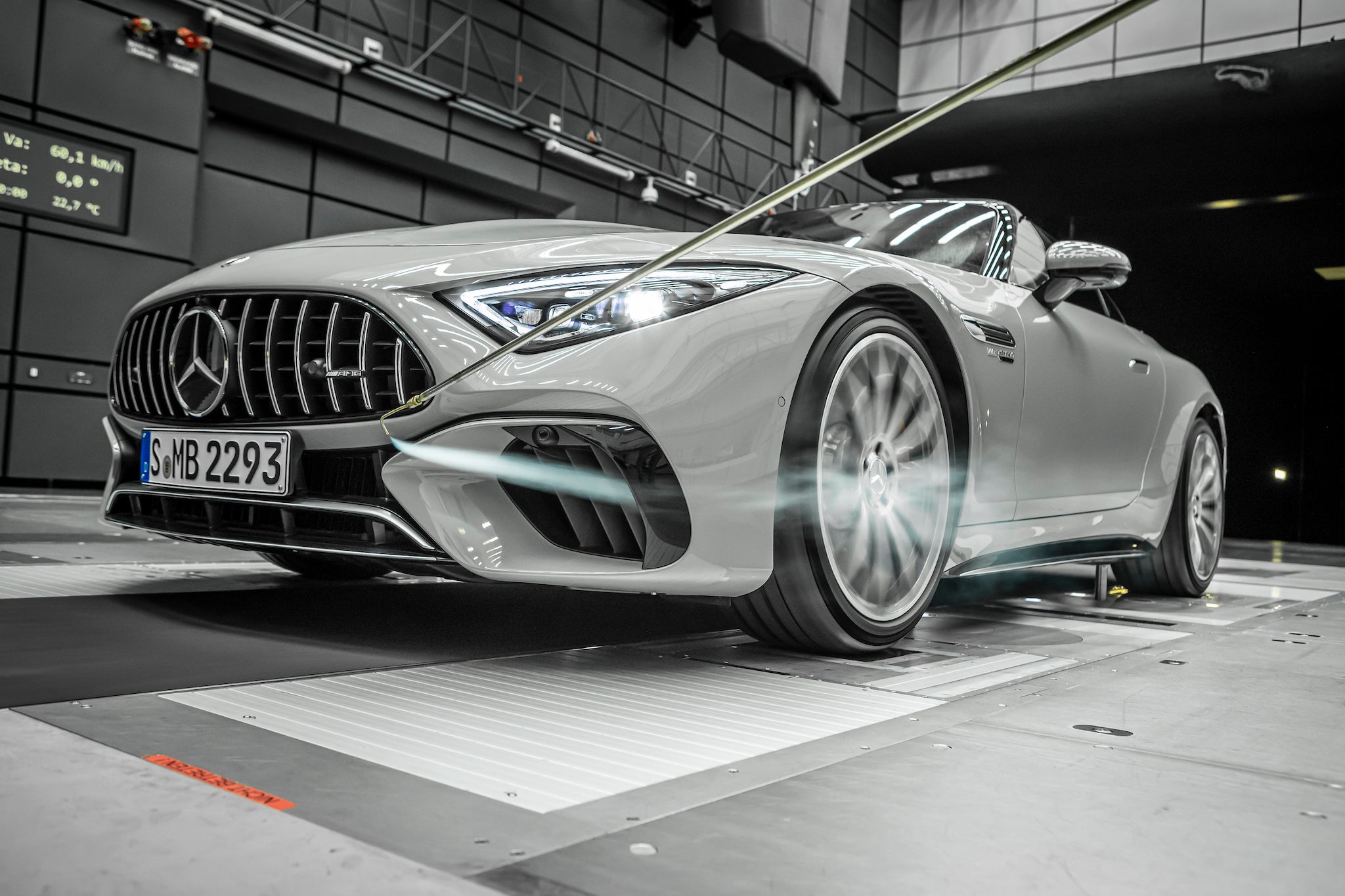 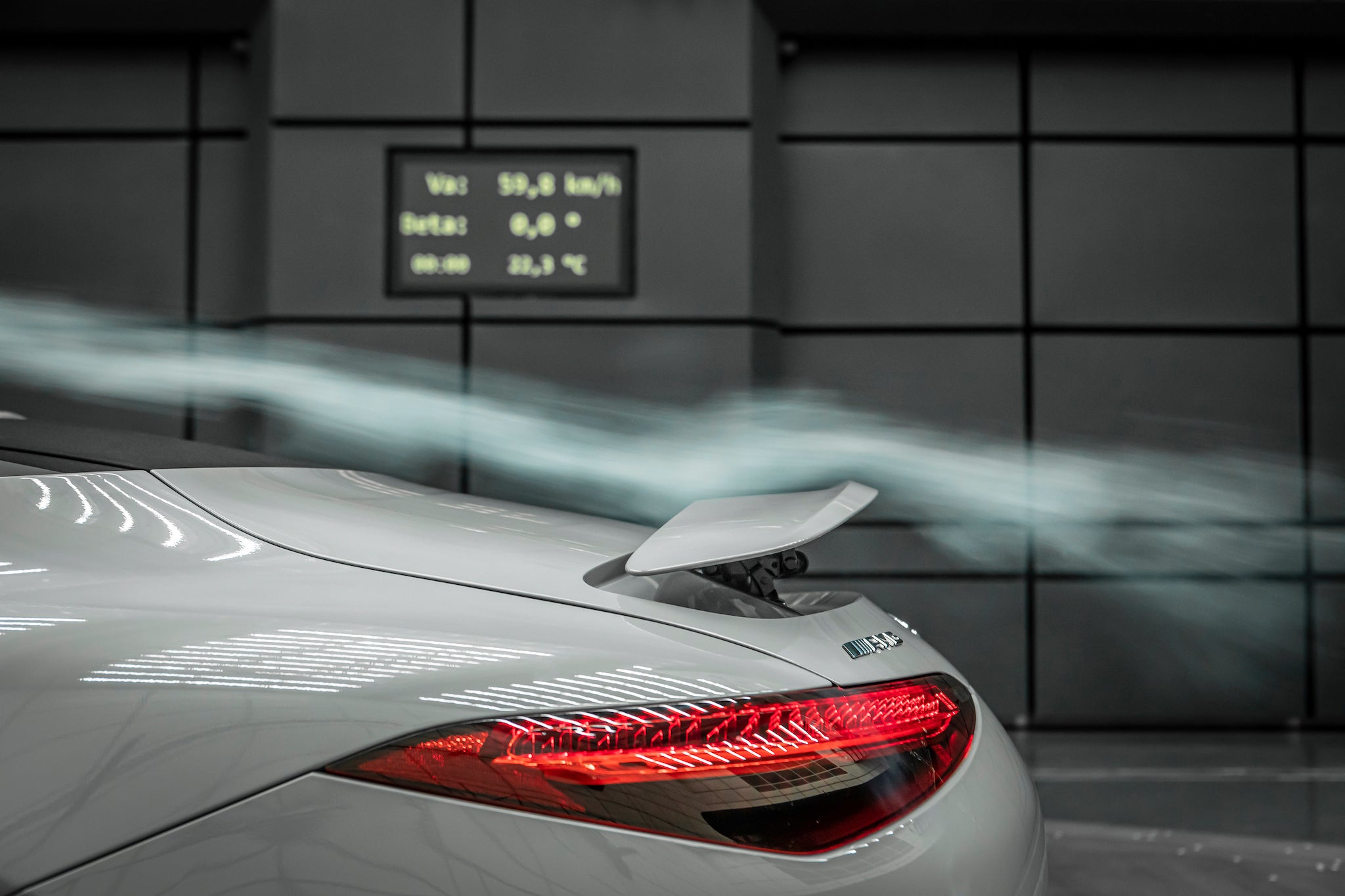 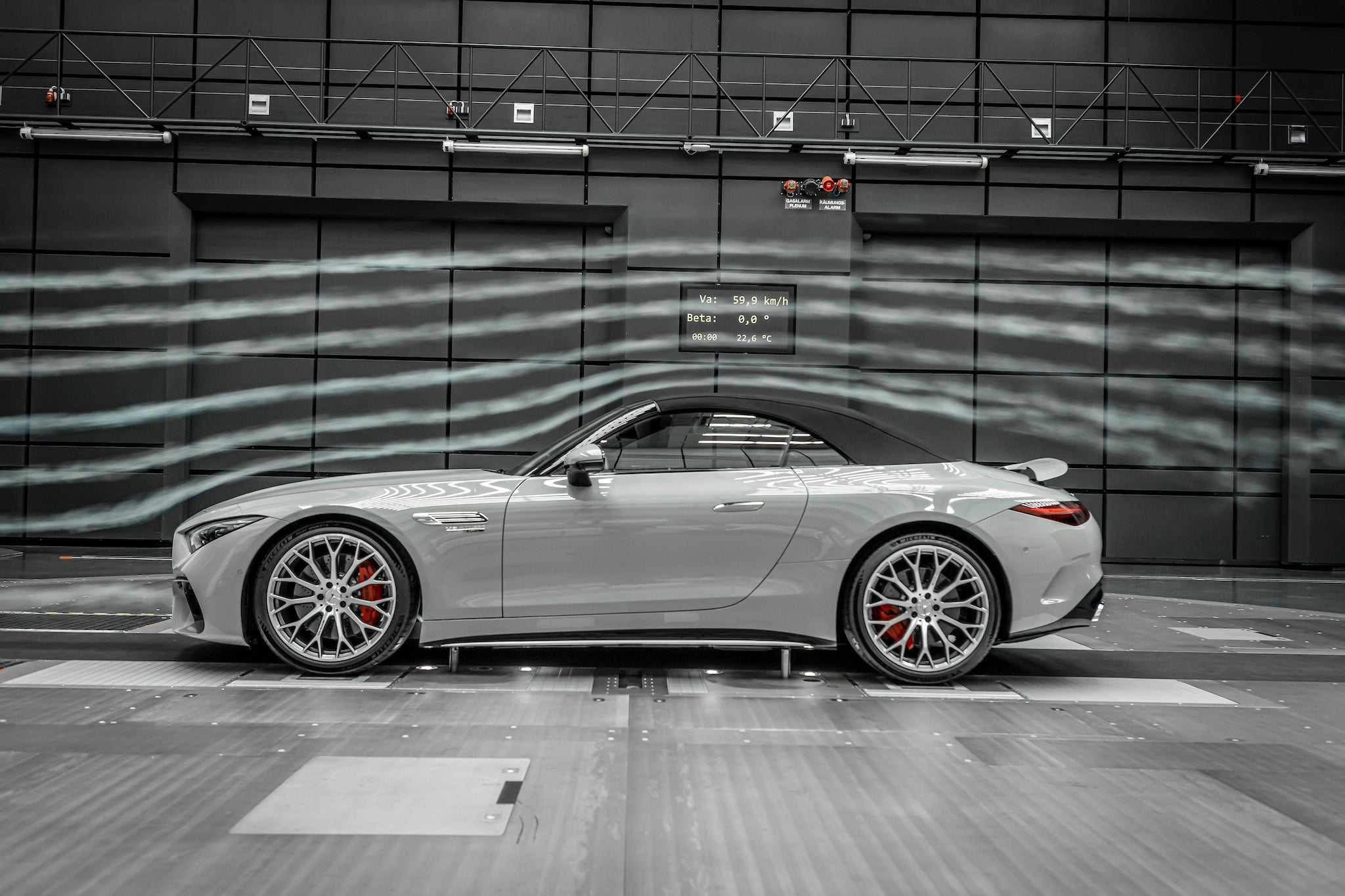 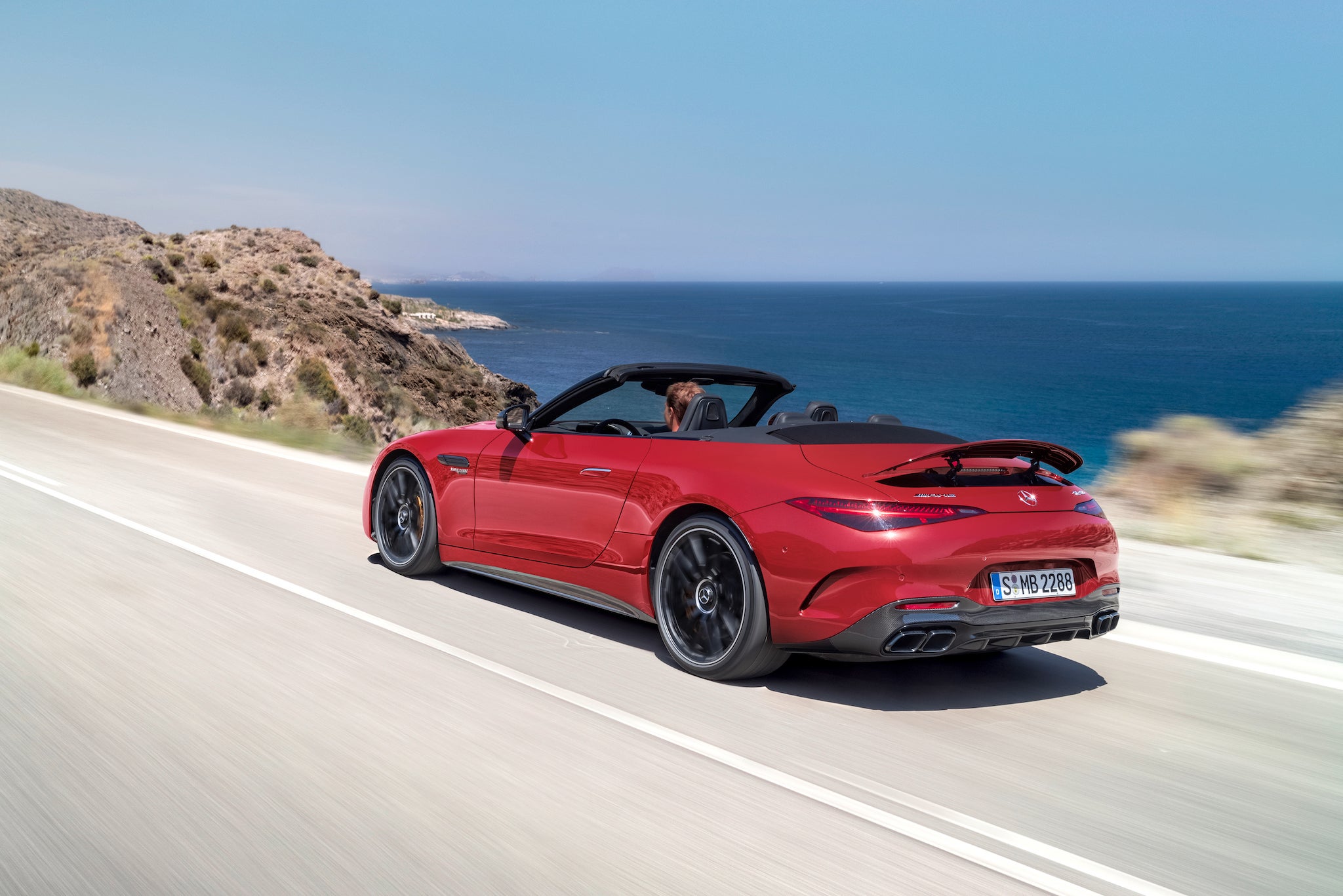 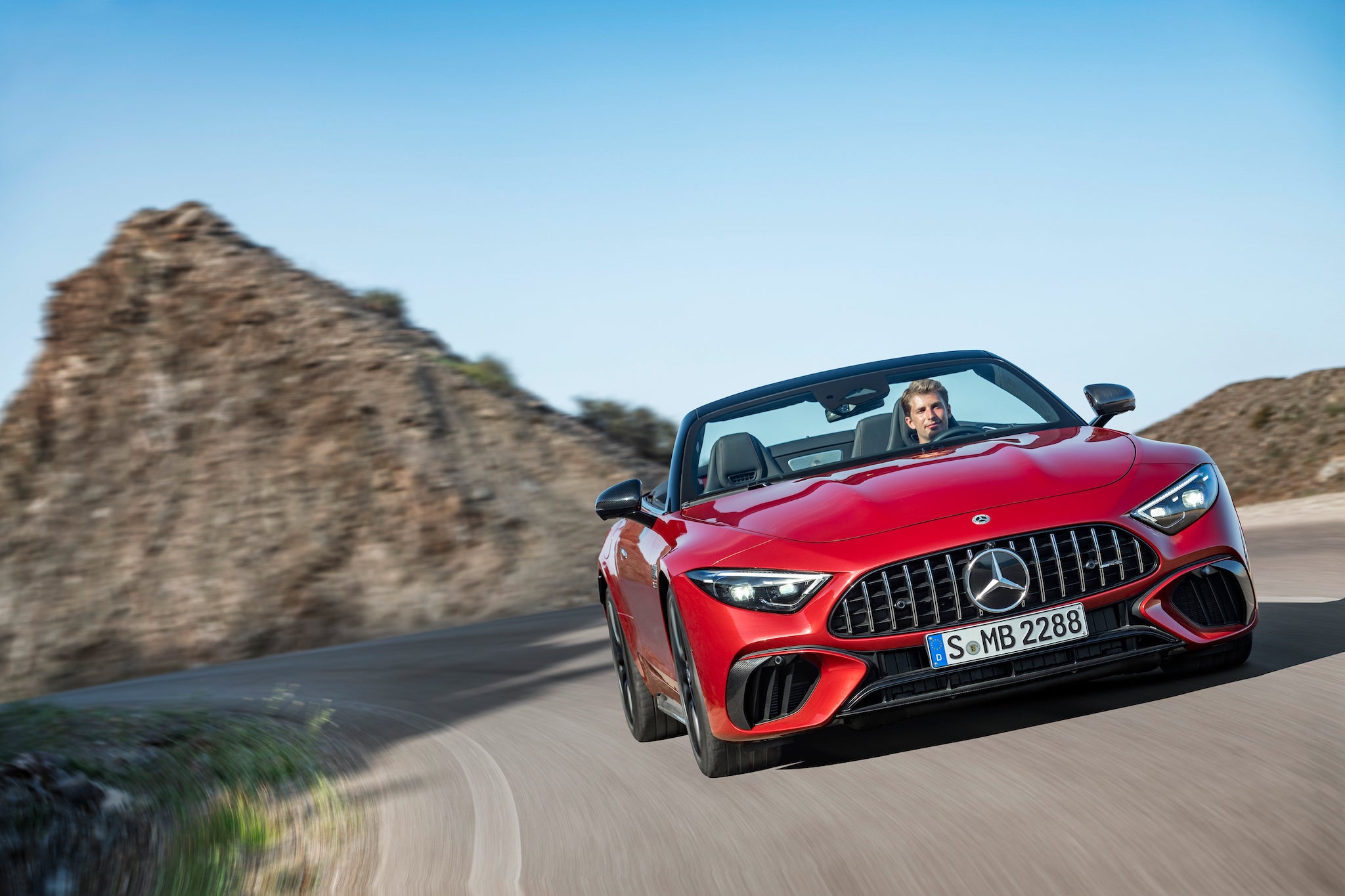 Further improving handling is the fact that this will be the first “series-production” AMG to have its front axle links encompassed within the rim of the wheel as well as optional ceramic brakes, and a limited-slip rear differential (standard on the SL 63 and optional on the 55). Standard rear steering lets the rear wheels move up to 2.5 degrees in the opposite direction to the fronts under 62 mph—tightening the turning circle by 2.6 feet—and in sync with the fronts over 62 mph for better stability. AMG Active Ride Control suspension with hydraulic roll stabilizers keeps cornering flat and cruising comfy. Those same hydraulics are also responsible for the AMG-first front-axle lift function that can raise the front end by 1.2 inches for easier driveway access and speedbump traversal.

Speaking of motorized exterior amenities, that soft top can open in 15 seconds at speeds of up to 37 mph. Airscarf neck heaters, by the way, are standard, as is the 11.9-inch touchscreen running MBUX that can be tilted by up to 20 degrees to compensate for glare. It’s all surrounded by a fairly minimalist modern Merc cabin packing the brand’s signature turbine air vents, Burmester audio, a 12.3-inch digital instrument cluster, and the current-gen AMG steering wheel. 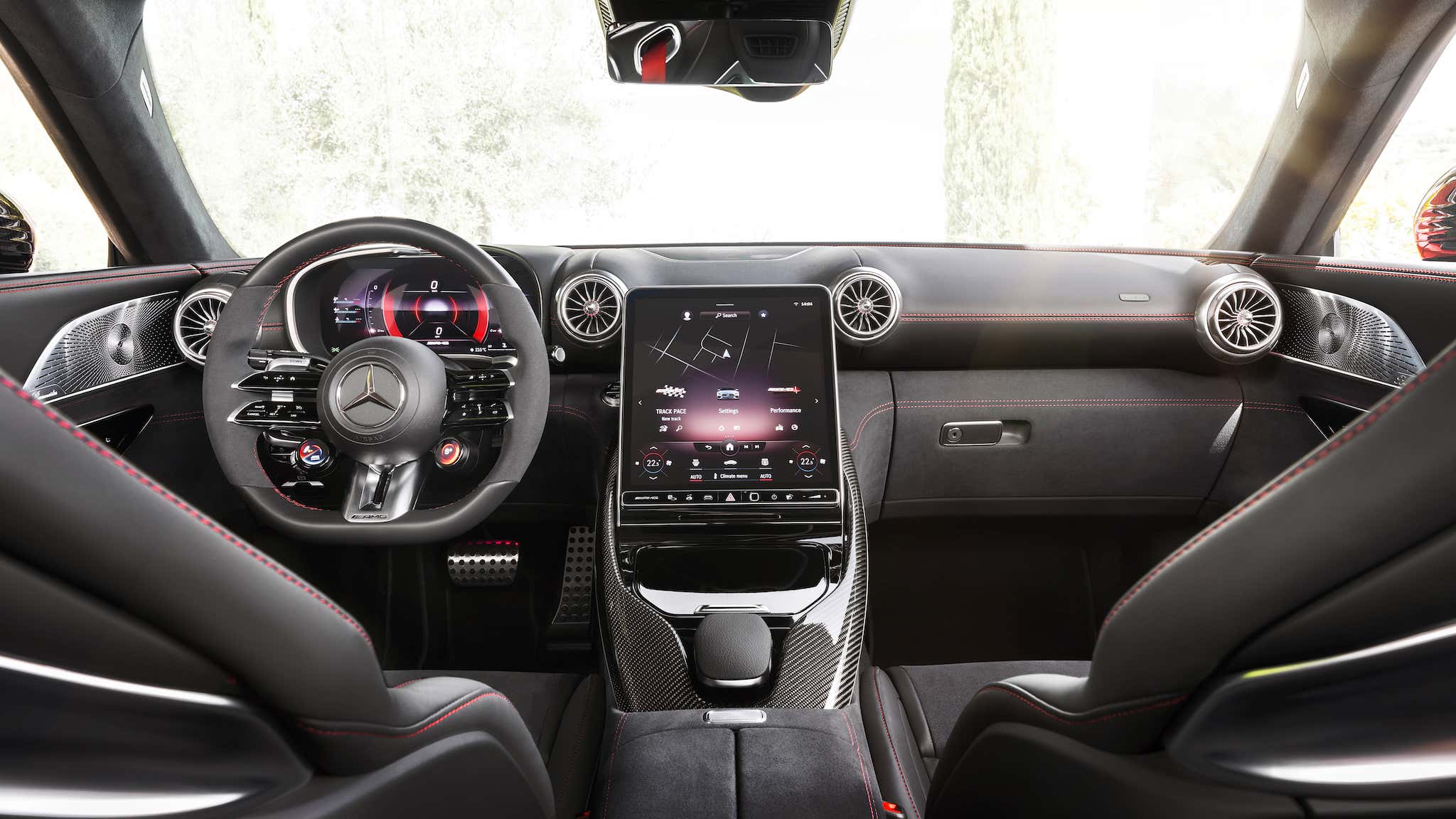 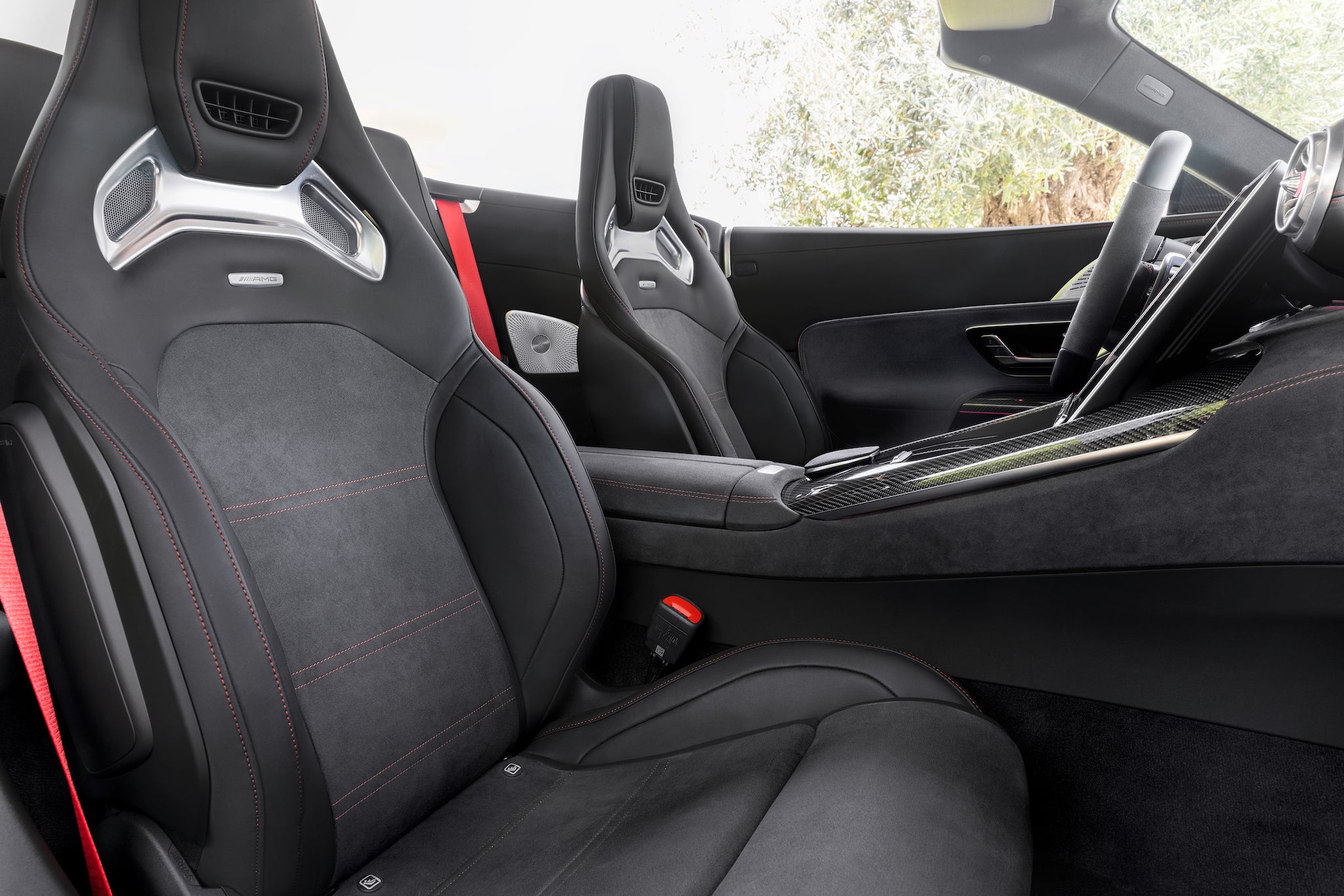 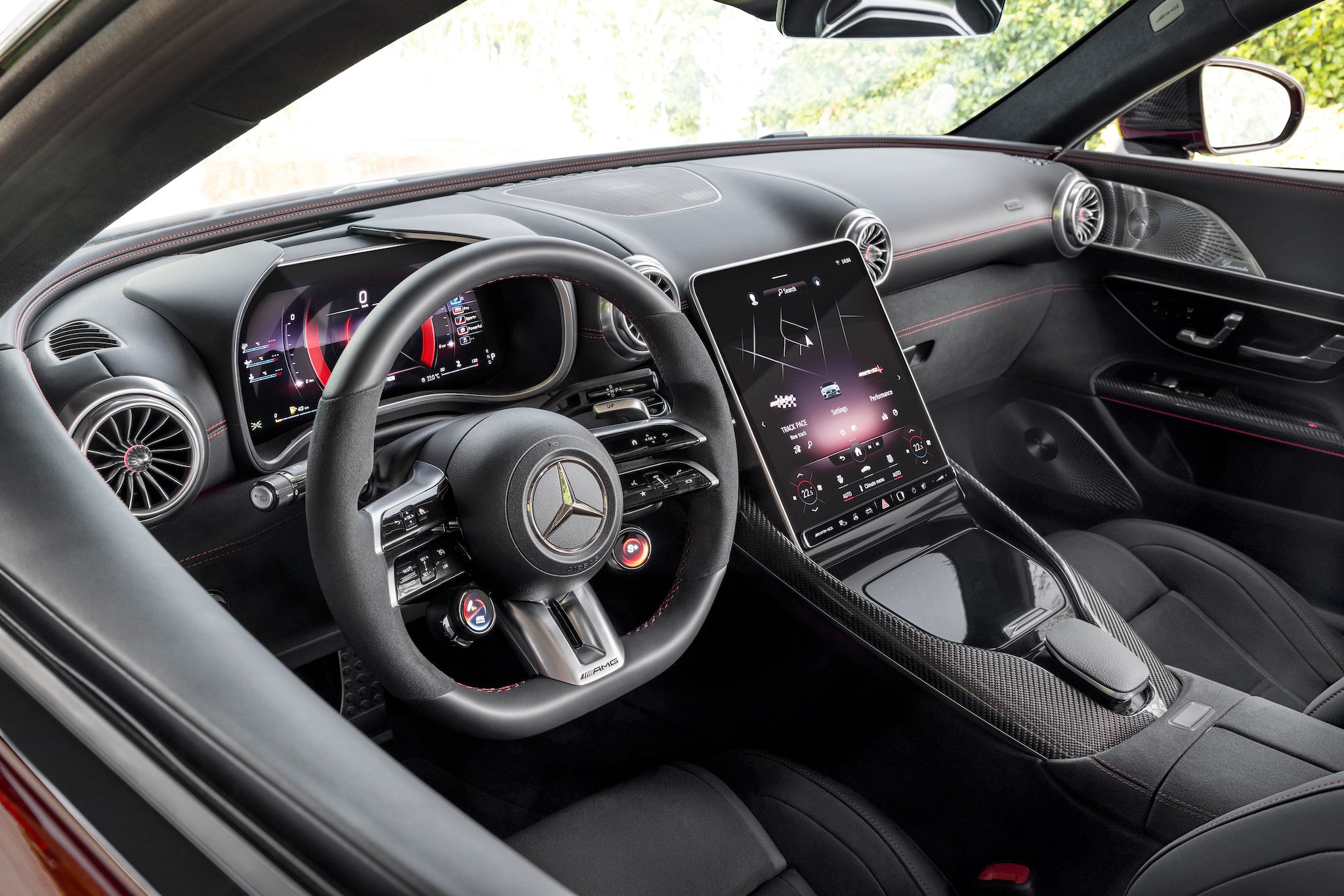 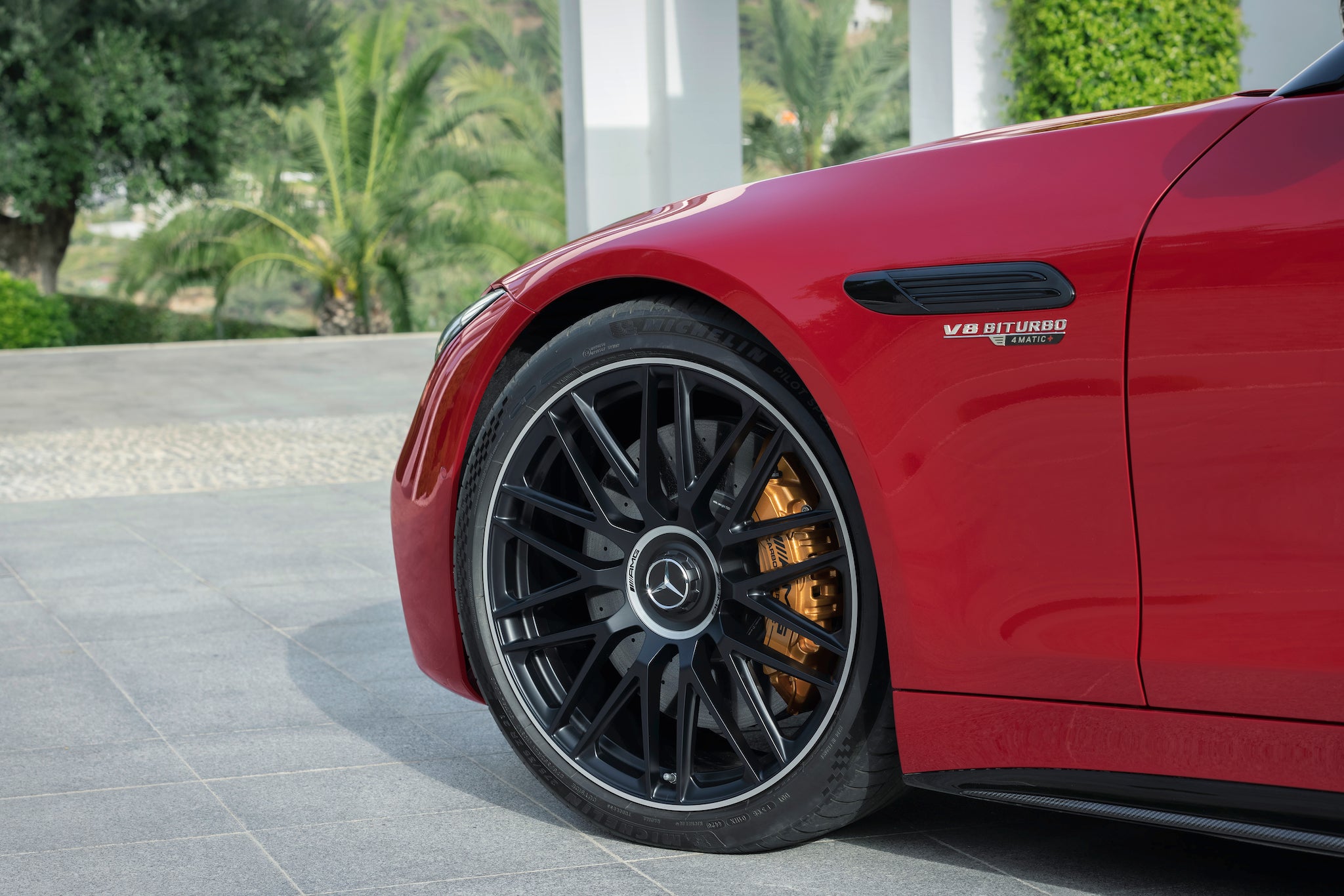 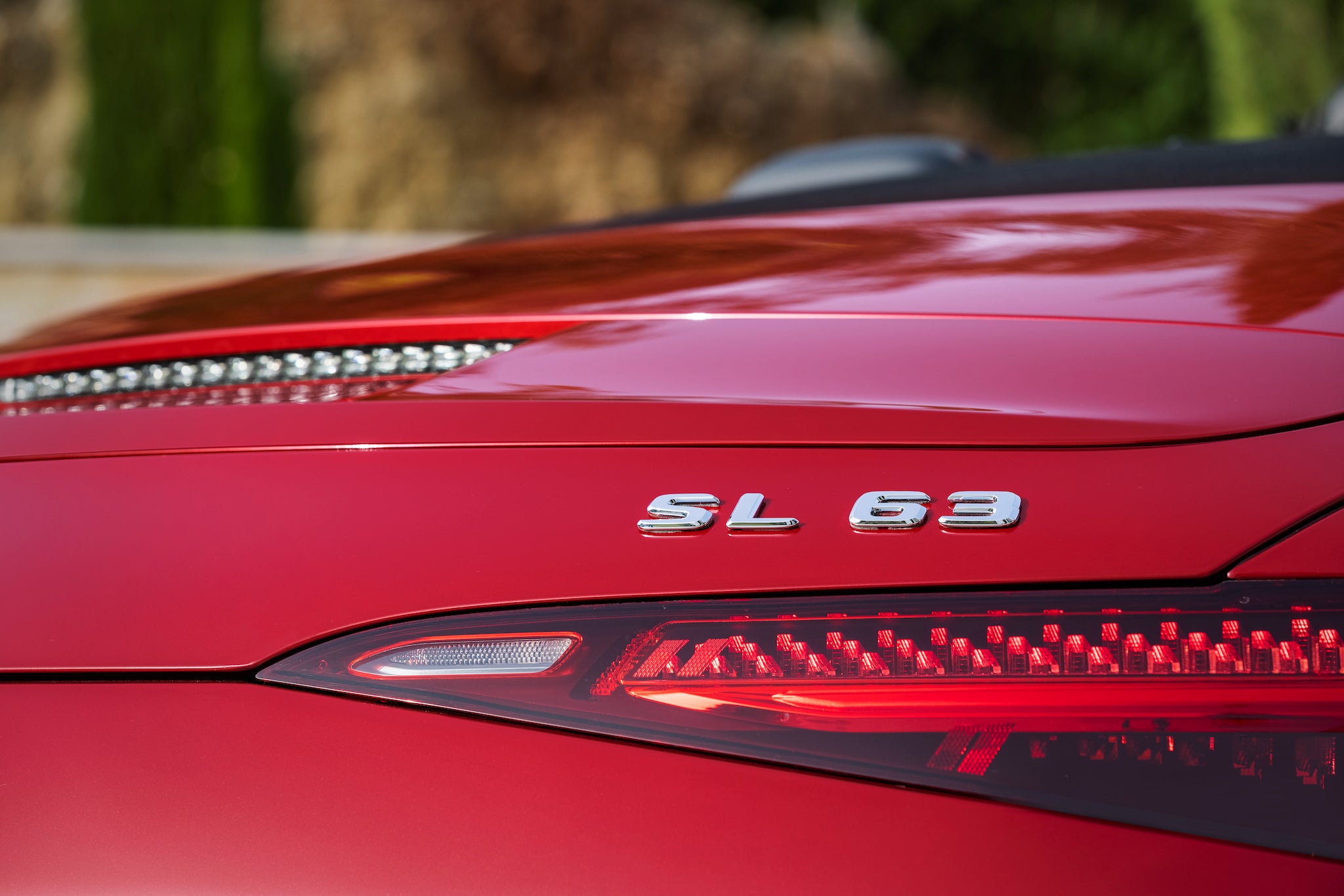 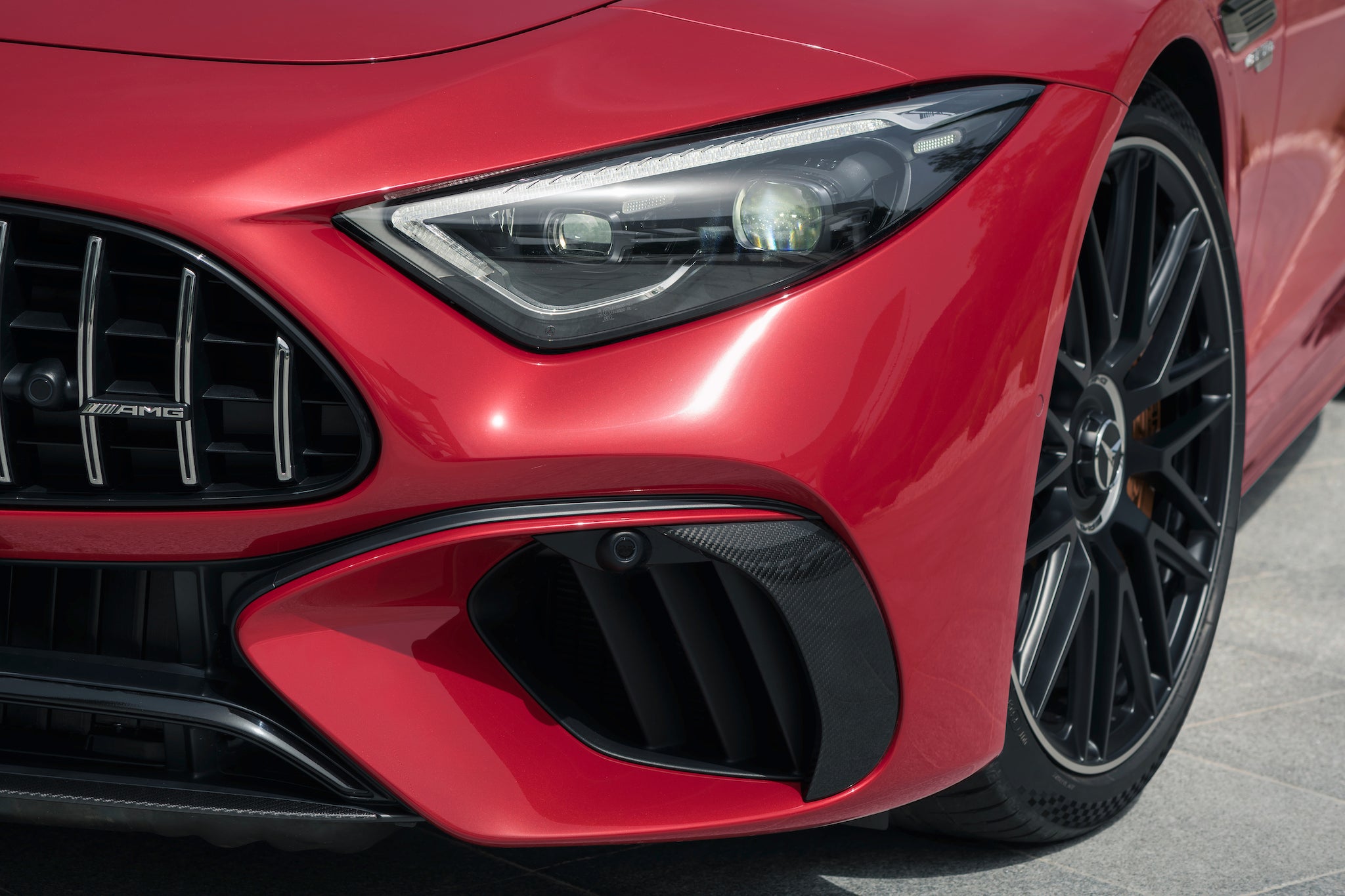 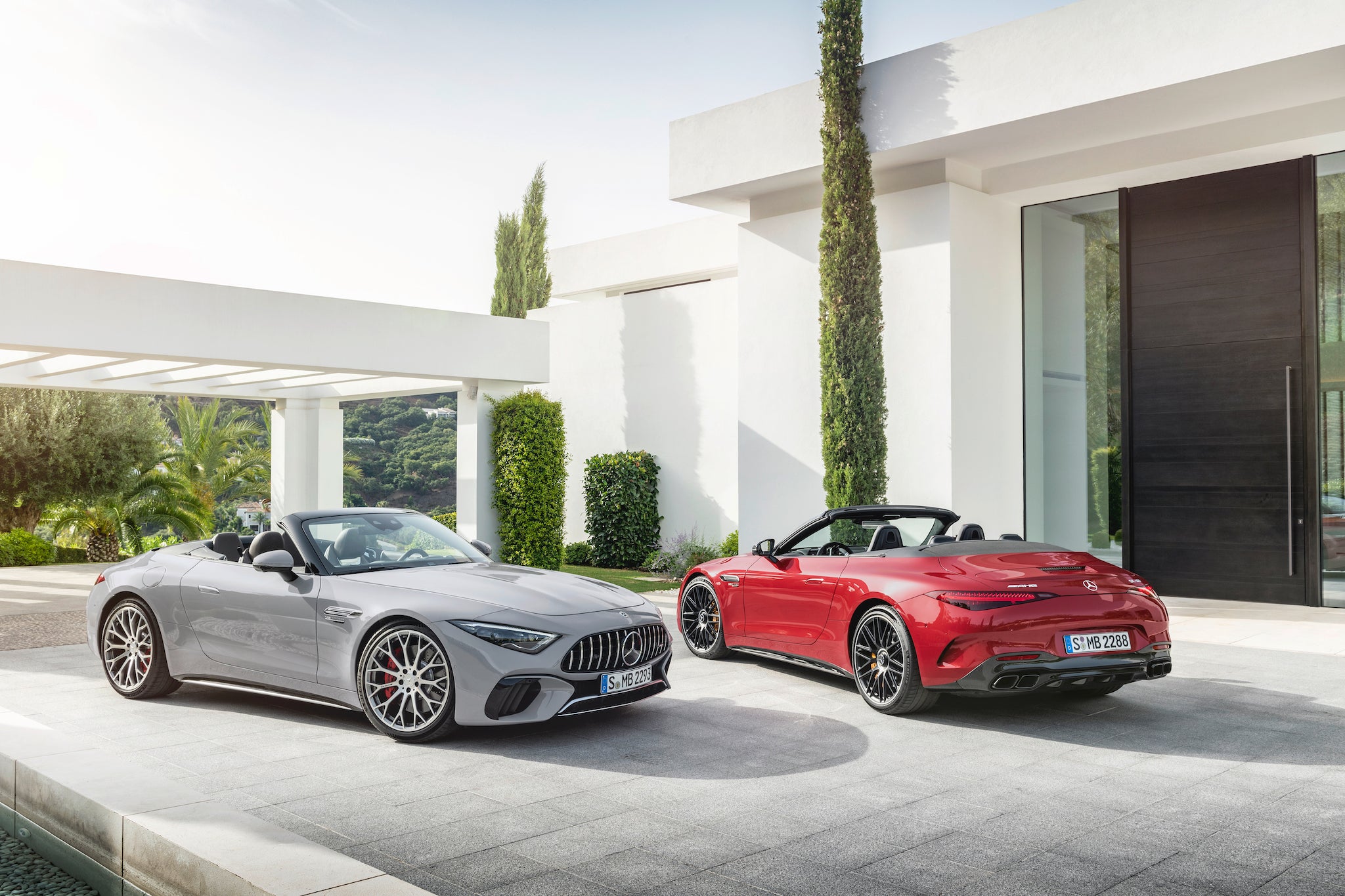 Got a tip or question for the author about the new SL? You can reach him here: [email protected]