Home » Auto News » 2021 Toyota Corolla Apex Review: A Civic Si That Shows Up to Class Without Doing the Reading

2021 Toyota Corolla Apex Review: A Civic Si That Shows Up to Class Without Doing the Reading

You may have read reviews of the new Toyota GR Yaris. You may have marveled at its 268 horsepower turbocharged three-cylinder engine and all-wheel-drive setup, and found yourself nodding in agreement with seasoned critics like Chris Harris, who liken the car to a kind of religious experience and say it’s proof of what Toyota is capable of on its own, without help from companies like BMW.

Then, in your despondency over the fact that the GR Yaris is not coming to North America at all, you may have looked to the Toyota Corolla Apex instead. Surely, you think to yourself, this can get me close to those thrills I’m denied by virtue of my location on Planet Earth. A reasonable position, I believe. 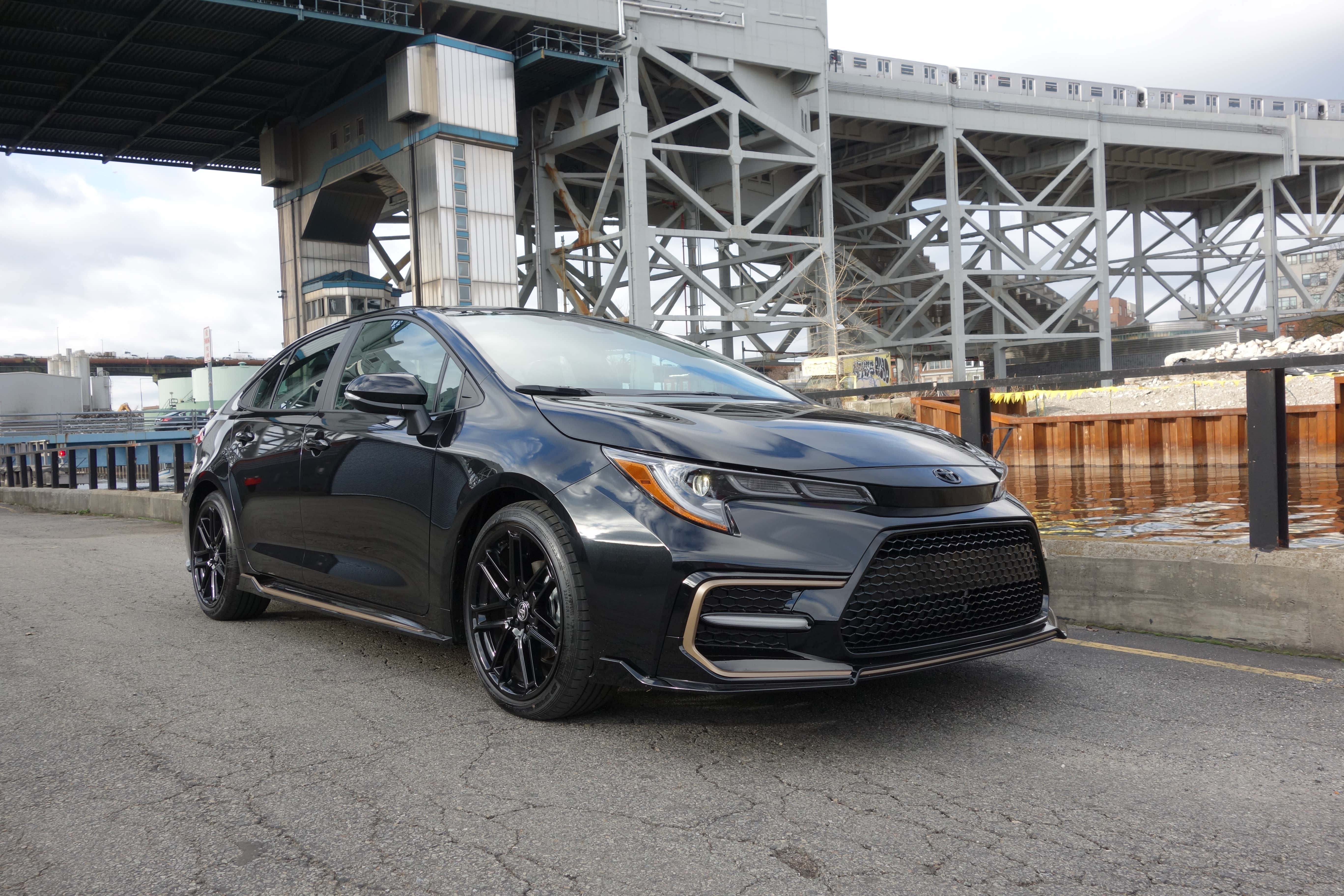 But I’m here instead to tell you: this ain’t it, chief.

On paper, the Corolla Apex is Toyota’s attempt at throwing down in the highly competitive $25,000 to $30,000-ish range of hot hatchbacks, sport compacts and other affordable performance cars. Of course, Toyota sells the 86, a perennial favorite among The Drive staff, but a Corolla should be much better at hauling passengers and gear than a small two-door sports car. (Fun fact: the old AE86 is where the “Apex” name comes from.) 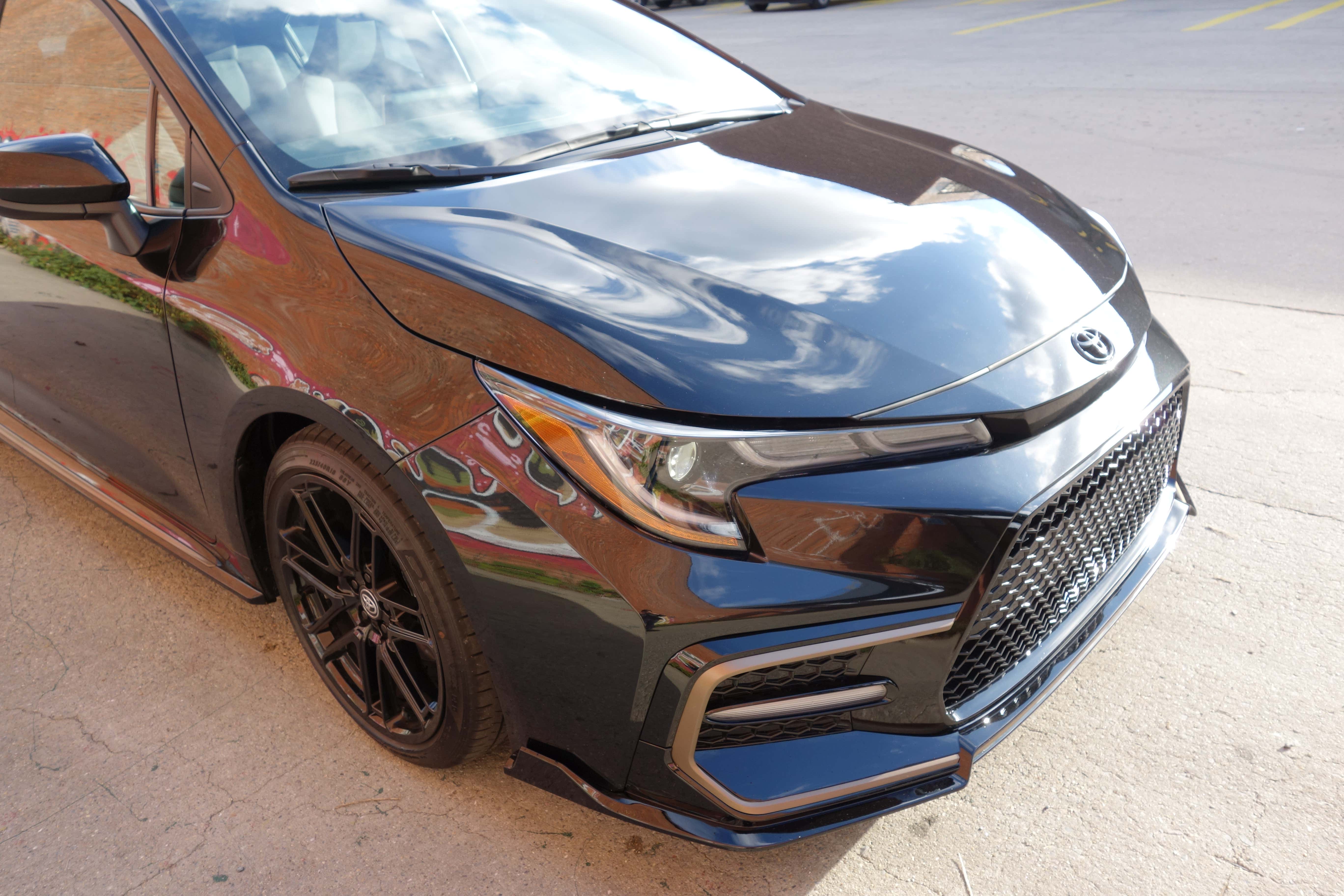 Ostensible competitors in this class include the Subaru WRX, Volkswagen GTI, the Mazda 2.5 Turbo, the Honda Civic Si, the Hyundai Veloster N, the promising Hyundai Elantra N next year, and several others. We may be on the cusp of an EV revolution and cars with actual manual gearboxes are tougher to find than ever, but our current options in this field happen to be quite good.

In theory, if done right, the new Corolla should be an excellent canvas on which to paint a proper performance car. The latest Corolla platform happens to be very good; overall, it’s a solid, well-built, handsome vehicle. Even in base manual form, it’s pretty fun to drive for what it is, and practical too, since it can be had in hatchback form as well. I actually rather like the new Corolla Hatchback. If you need an affordable modern car that’s going to sip gas and probably last forever, you can’t go wrong there. My first car was a Corolla. I’m still partial to them today. 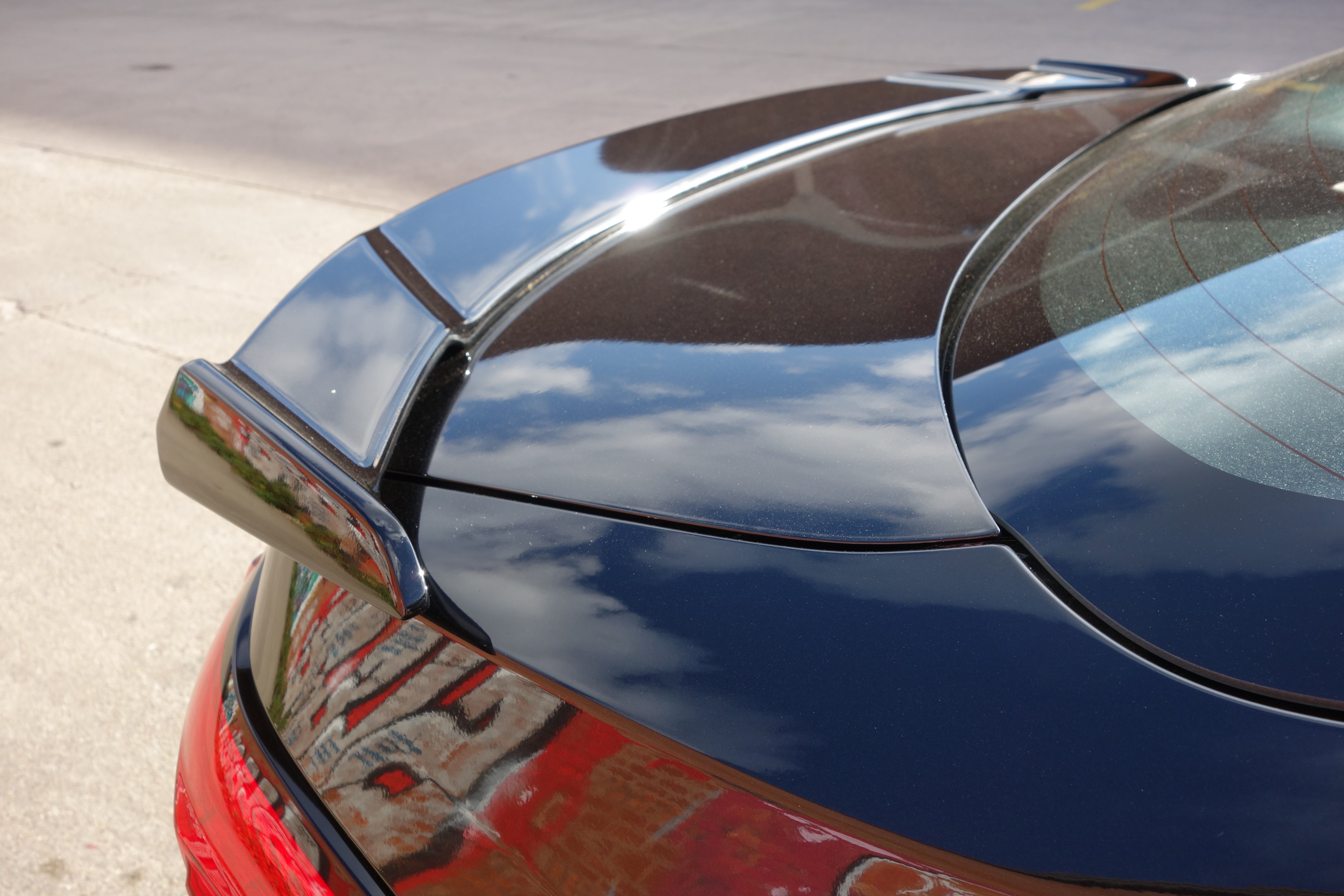 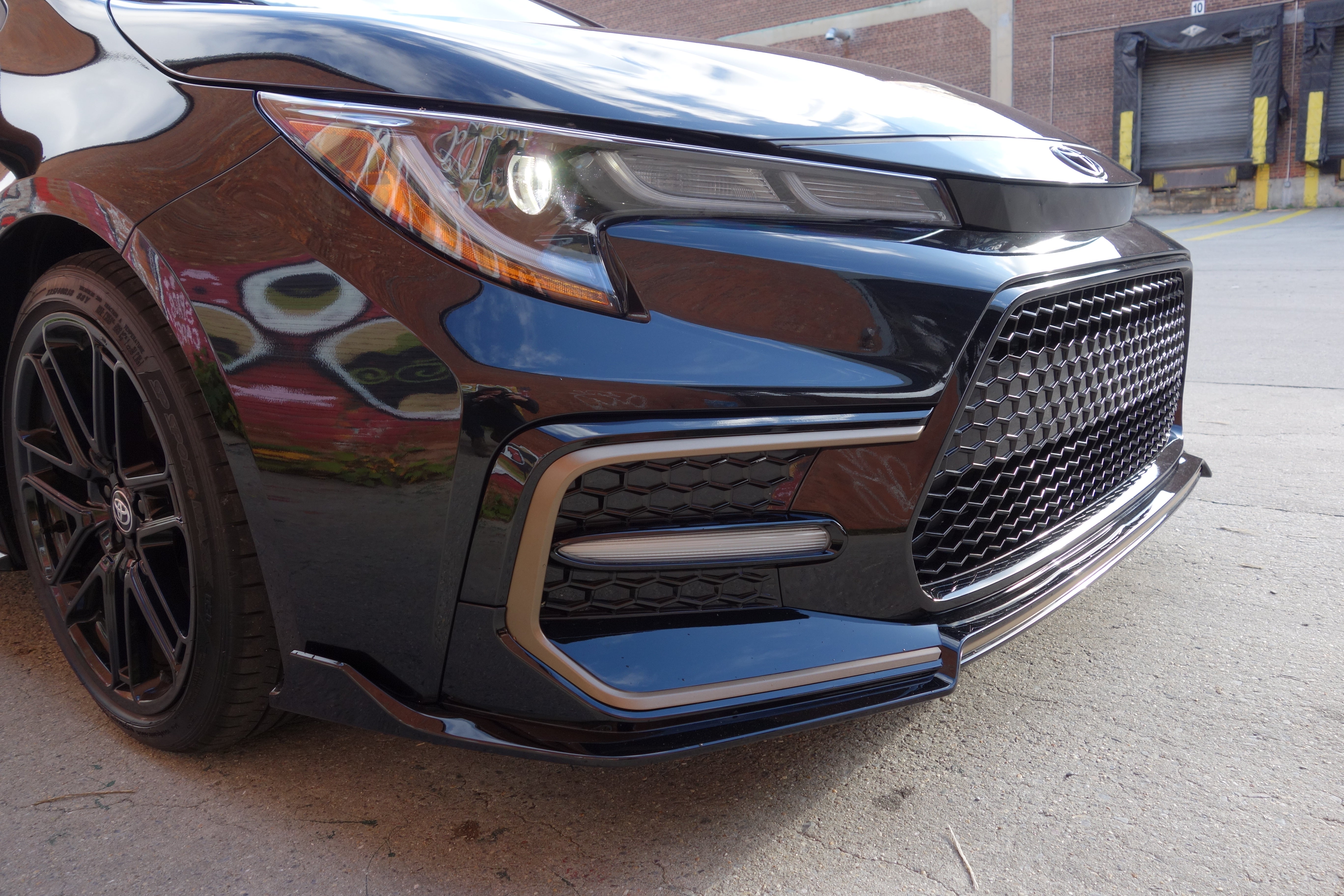 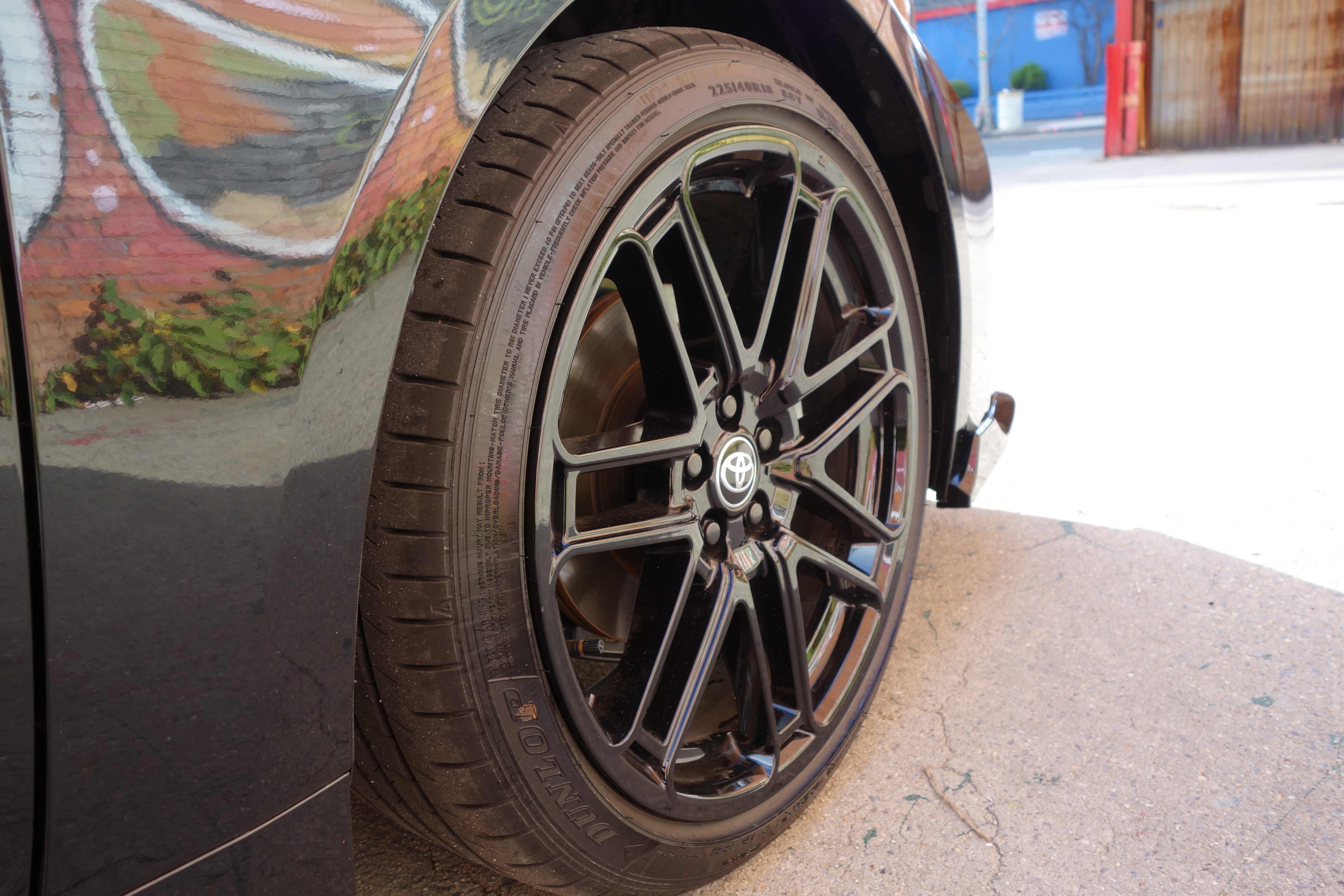 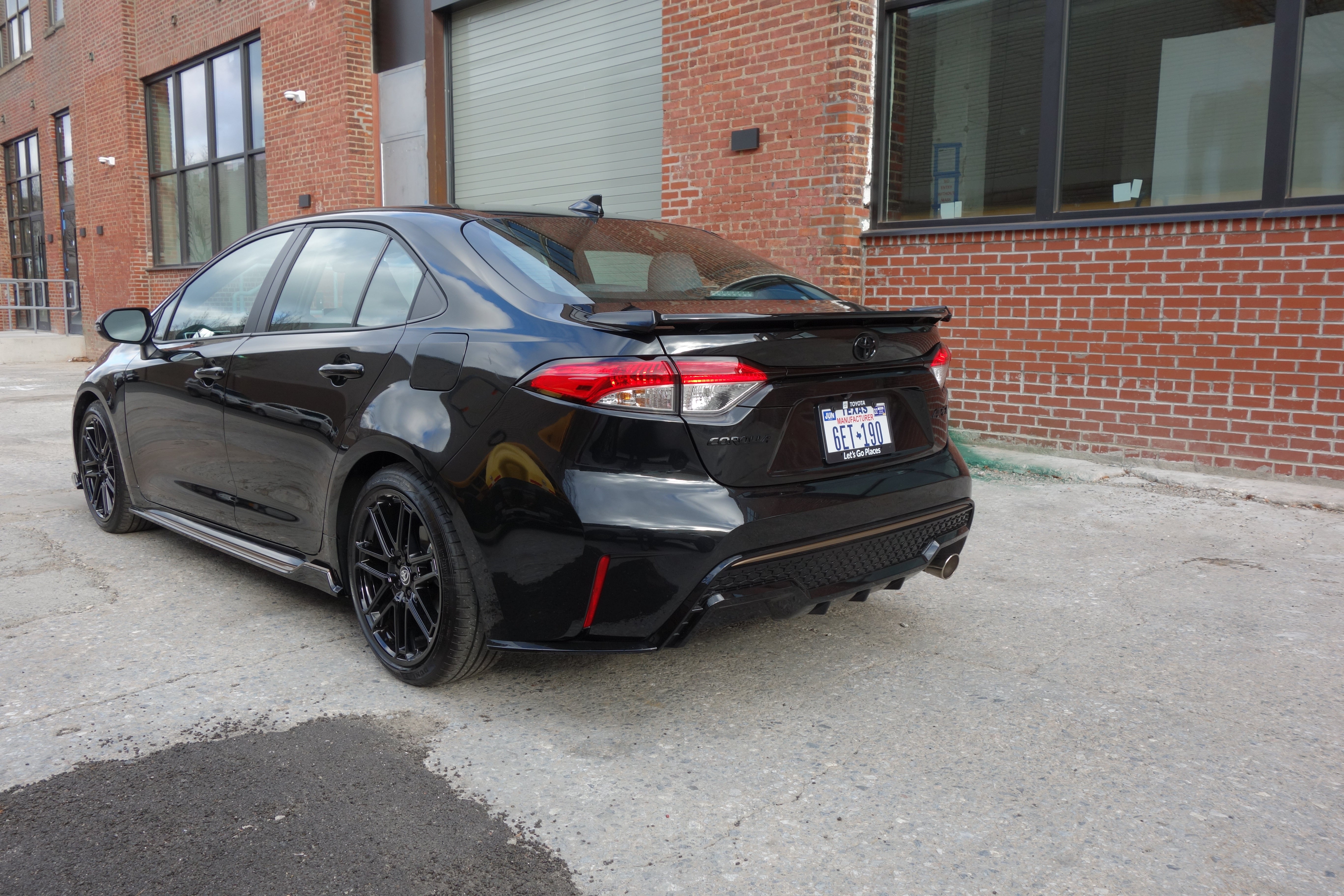 The Corolla Apex aims to add fun to a proven recipe with a sedan-only body—no hot hatch version to be had here, sadly—and a host of suspension improvements including solid anti-roll bars, coil springs that lower things by 0.6 inches and boast an increased spring rate, specially tuned shocks that provide increased damping force, and new jounce bumpers that, in Toyota’s own words, “ensure the lowered ride height doesn’t hinder ride quality.” (This is false, as I’ll dive into shortly.)

The changes found on the Apex increase roll stiffness 47 percent upfront and 33 percent in the rear. It’s also got a number of visual changes, including a more aggro front end, spoiler and blacked-out “Apex” badges. Finally, the model can be had in either six-speed manual or CVT forms; The Drive tested the former, and only 120 of those will be built, so it’s safe to assume most Apexes will come in two-pedal form.

Unfortunately, these tweaks can’t make up for the fact that this “performance” Corolla is largely gutless with just 169 horsepower. And that’s just the least of its problems. 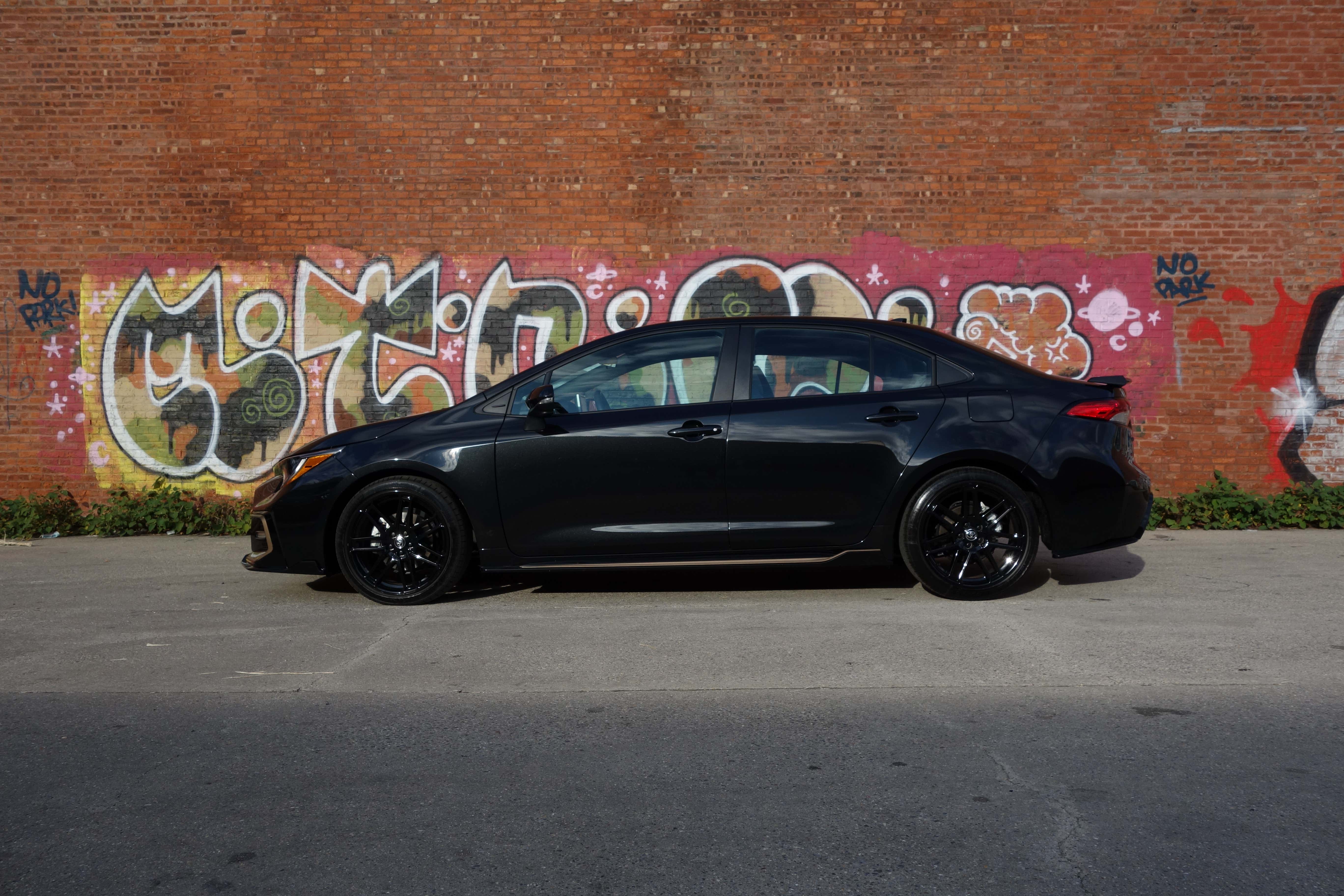 I stand by my assessment that the current Corolla, especially with a manual gearbox, is a damn fine little car. It’s not some cheap-feeling penalty box, something that actively punishes you for being on a budget, the way that small entry-level cars were for a long time. A funny thing happened when SUVs and trucks started taking over the market: the sedans and hatchbacks that didn’t get killed off by their parent companies (looking at you, Ford and General Motors) had to adapt and evolve. They had to get better and offer their buyers more bang for their buck than ever before.

And the current Corolla is a good example of that. It’s stayed pretty small, unlike the current Civic, which has ballooned to 1990s Accord proportions. It comes in a hatch again. It offers a choice of a stick-shift. It’s small inside, a few steps up from something like a Mini Cooper, but it’s comfortable and has a decent-sized trunk or hatch area. The interior is spartan, but it doesn’t feel cut-rate except in one regard: It didn’t come equipped with a navigation option. 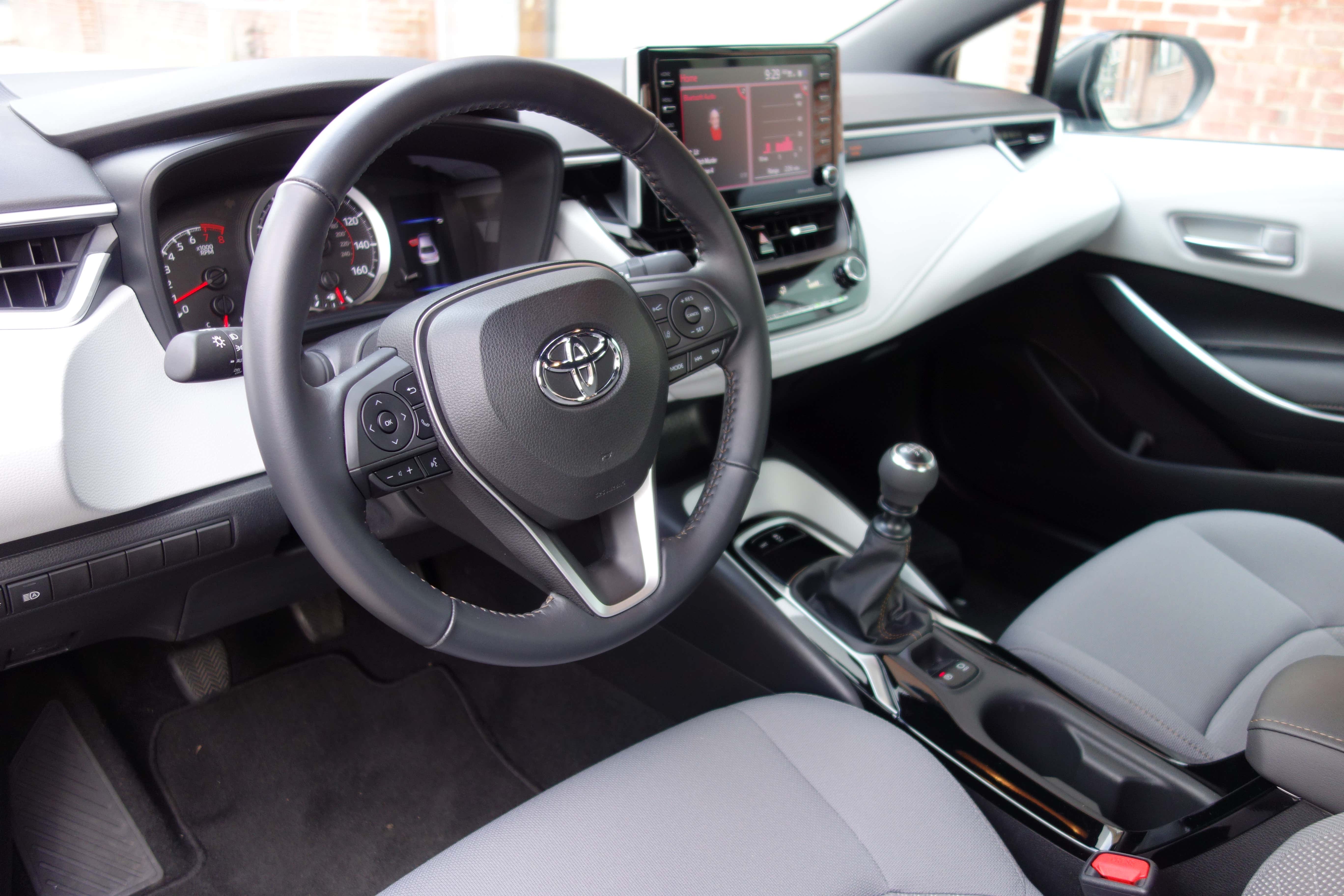 Though it takes some doing, it’s also fun to toss around in the corners thanks to its small size. So in my book, the Corolla SE Apex excels because it’s a Corolla; it falls down because it’s an Apex.

What’s Not So Good

For reasons I still cannot fathom, various people have been paying me to review cars for about a decade now. And I think the Corolla Apex may have the worst ride quality of any car I’ve ever tested or owned. That includes dozens of supercars, a few hypercars, more BMW M cars and AMGs than I can count, and two Mini Cooper S-es I personally owned.

The Apex is a rough customer—an absolutely punishing and brutal experience on any sort of road, especially unpleasant here in New York City’s trash streets and highways. The ride is so tough that it actively detracts from the quality of the driving experience as a whole. My wife and I had a moment on the Belt Parkway where we turned to each other and said, “Is this thing really that bad?” And the answer is yes, yes it is. 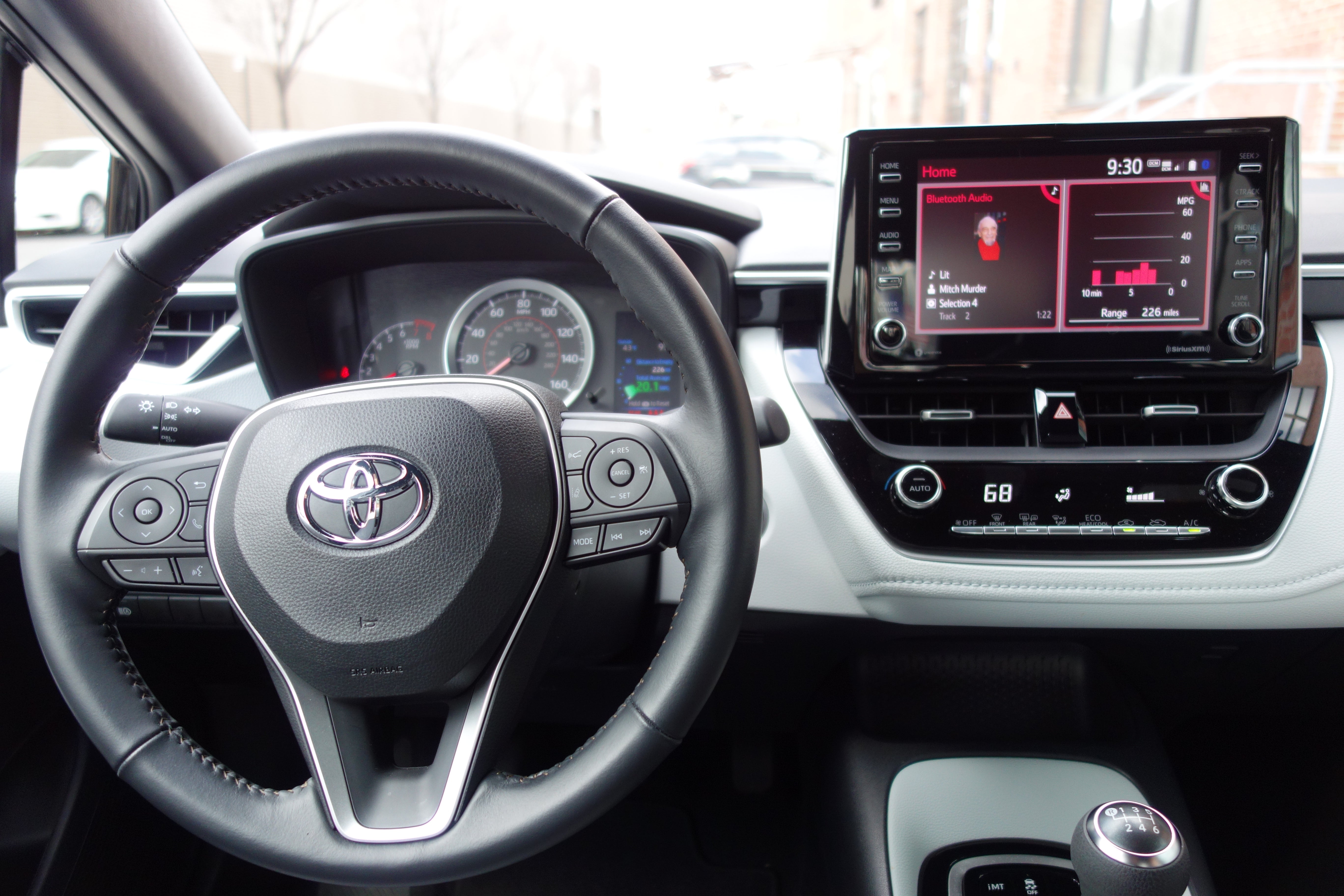 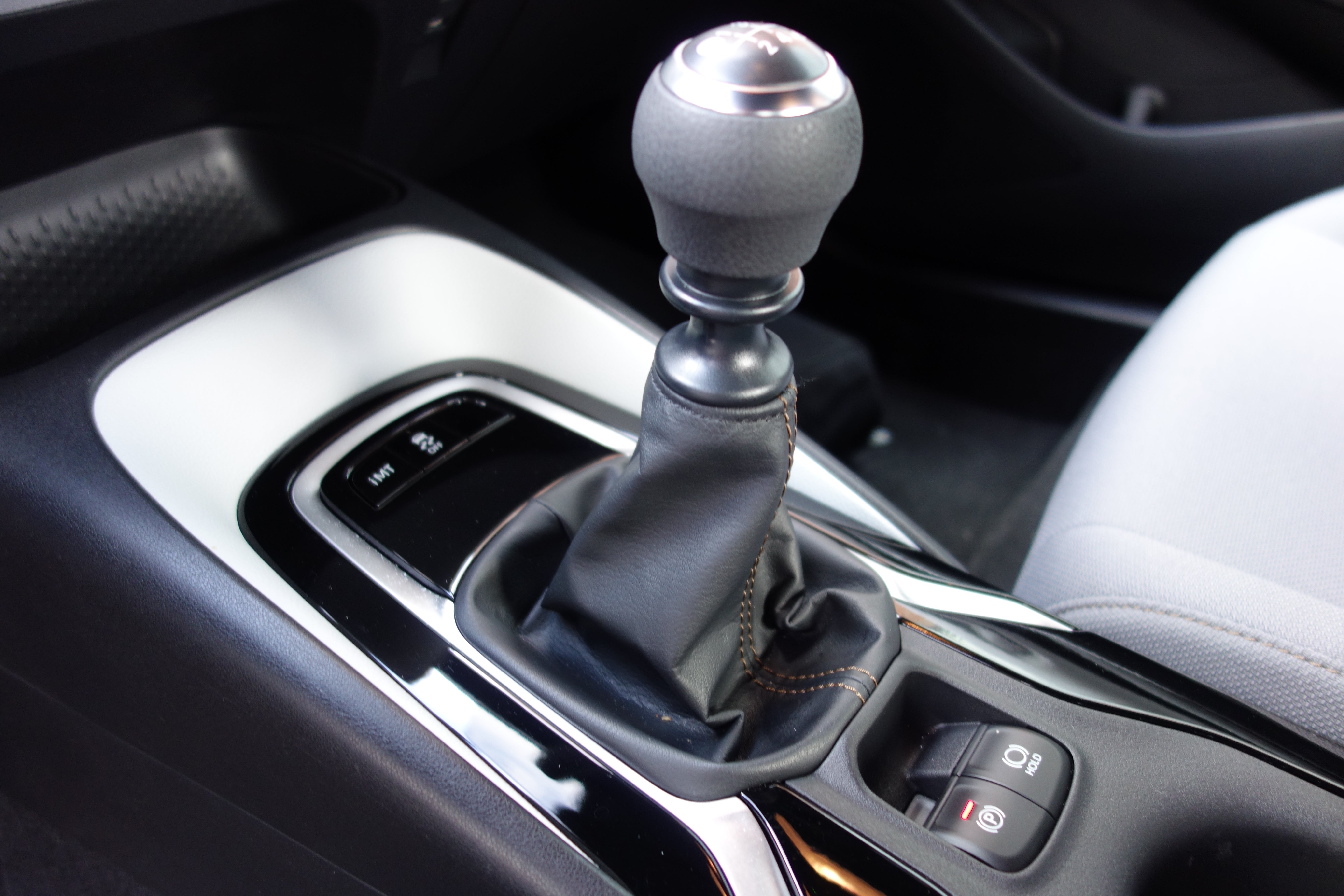 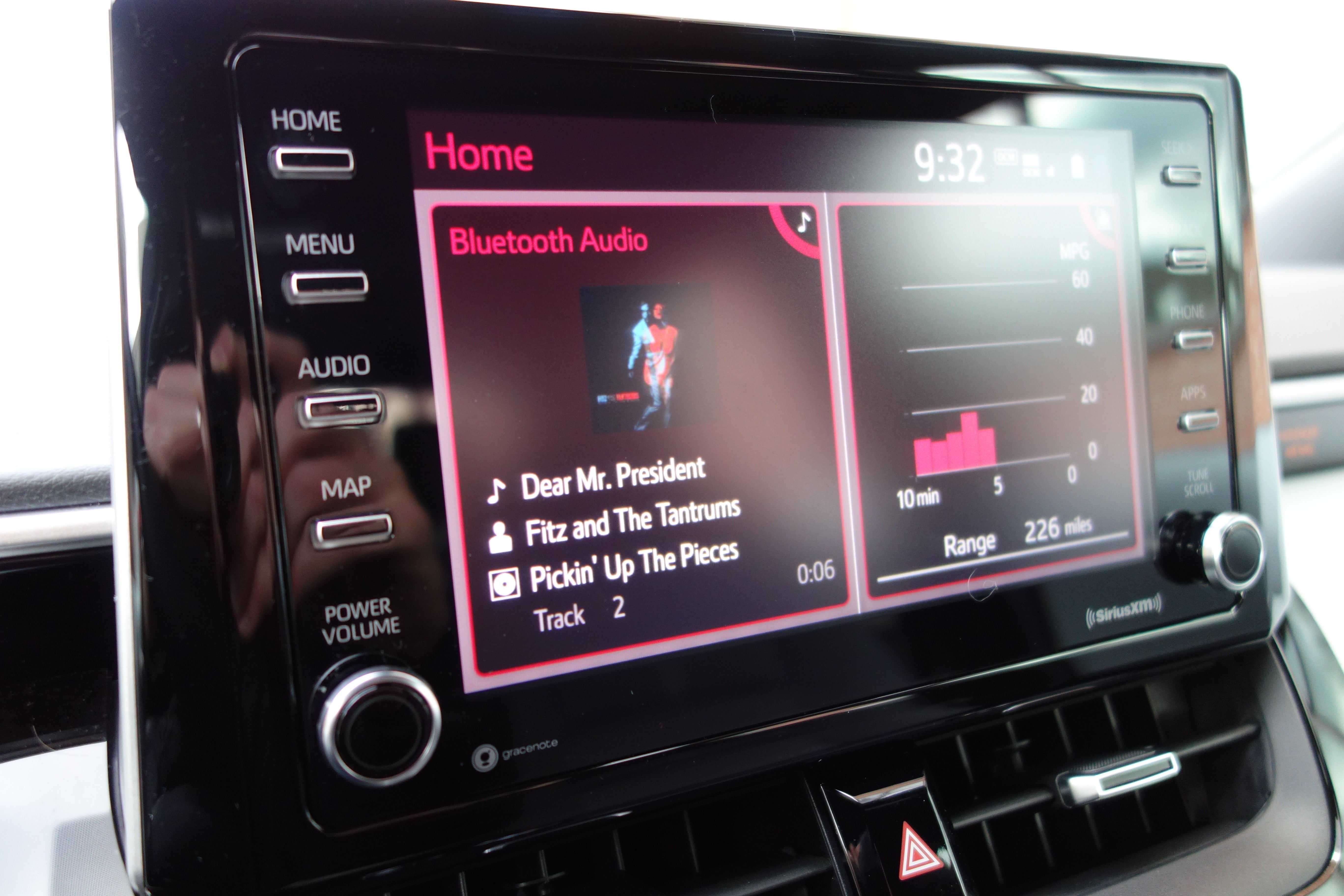 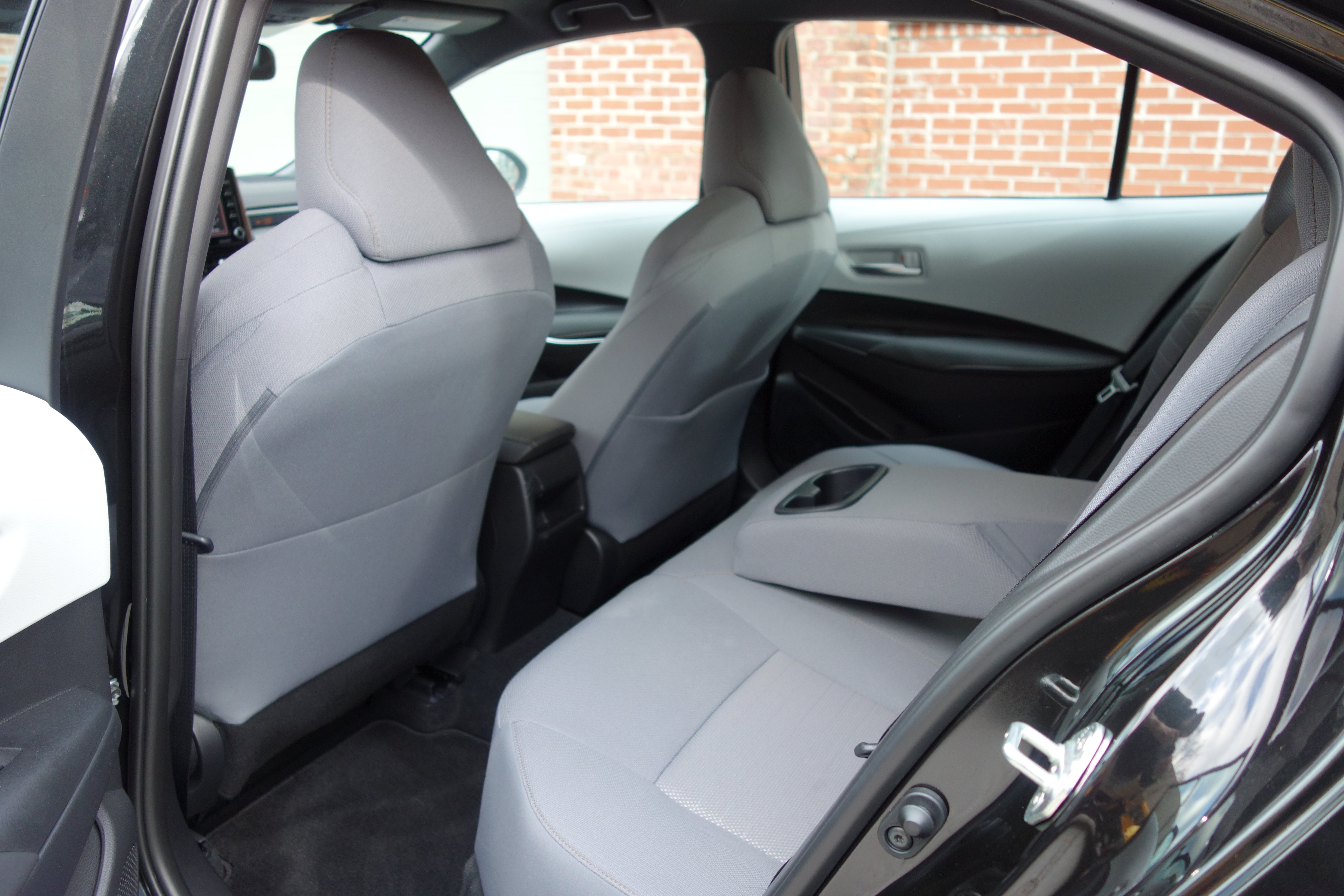 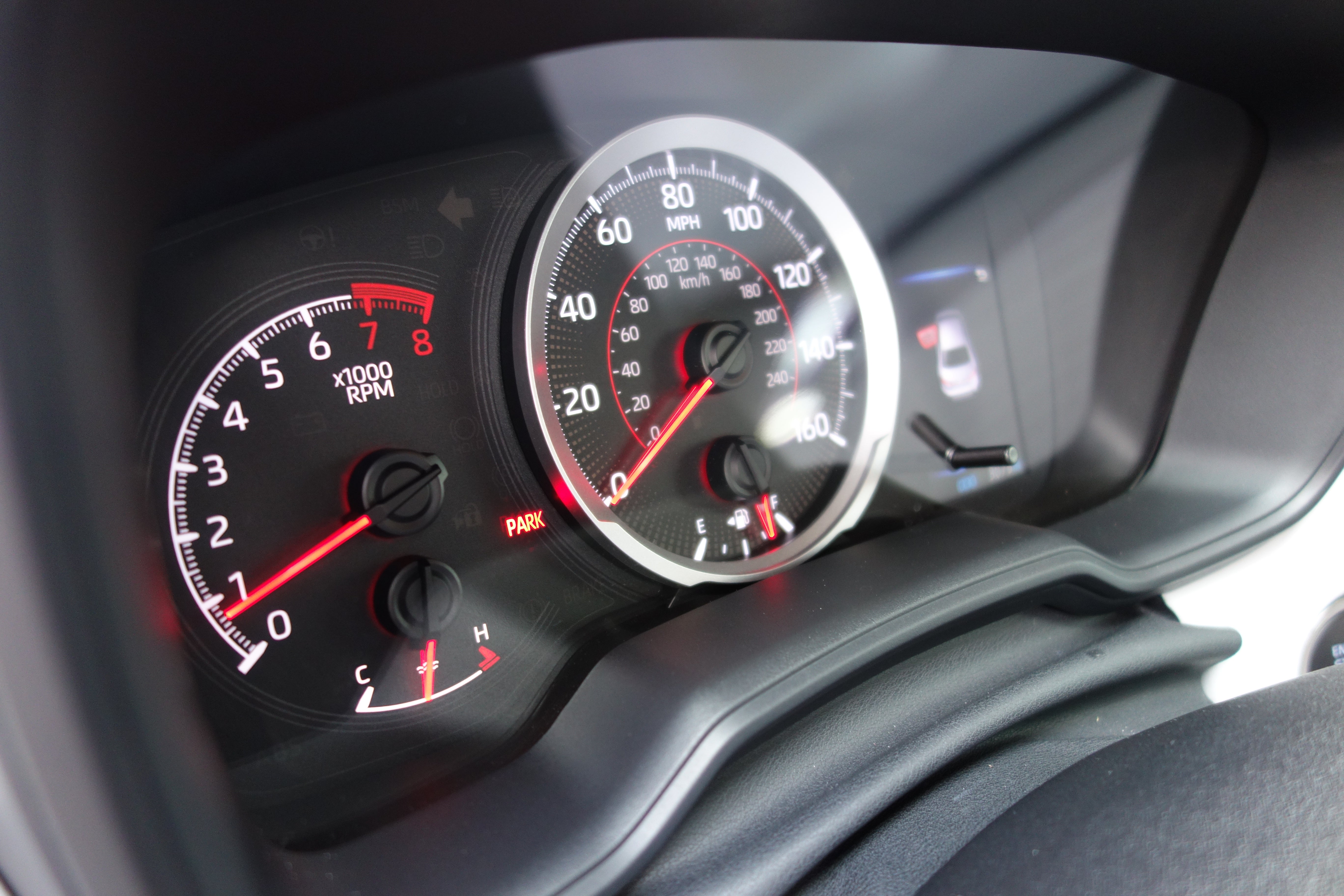 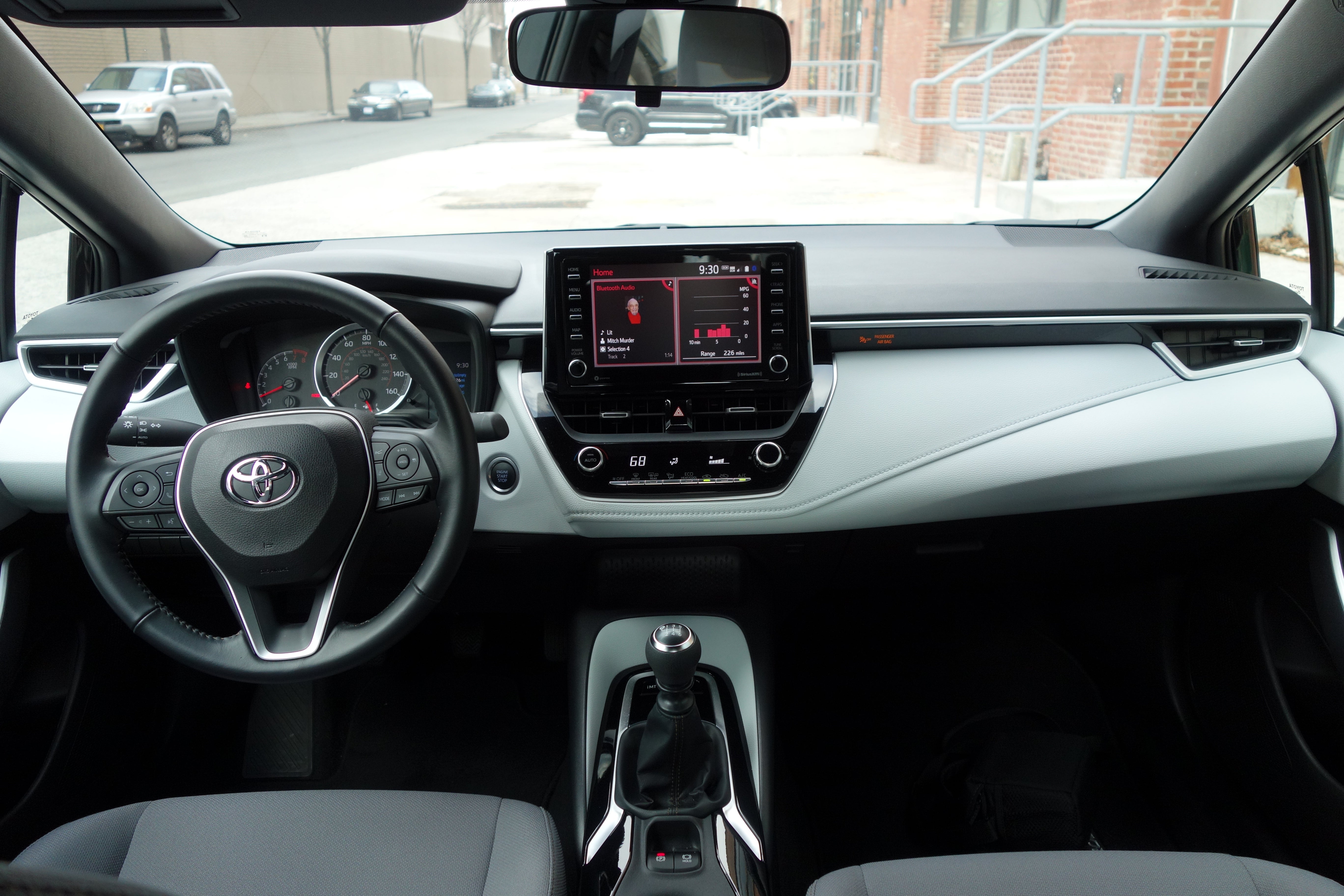 The ride is so bad that after a few initial hours of testing, I never really looked forward to driving the Corolla Apex again. I did it when I needed to get somewhere or because I needed fodder for this review, but I certainly didn’t enjoy it. Normally, when you get a “performance car” with a stiff ride, it’s something like, say, a BMW M4, where the tradeoff is 500 horsepower or something.

Not so, obviously, with the 169-hp Corolla Apex; the same power output as a normal Corolla. Without a turbo engine like most competitors in this space, it attempts to pull fun-car duty with an economy car engine. And that works when something weighs very little, like a Miata or a Lotus or an old-school Honda CRX. A modern Corolla tips the scales at over 3,000 pounds, so despite its small size, this motor comes up short in the thrills department. It’s a buzzy, thrashy engine that doesn’t like to be pushed very hard.

If you’re willing to try, opt for the six-speed manual, although with only 120 being built those may be hard to come by. The gearbox is a good partner for wringing out this motor for all it’s worth, but it’s definitely a compact car gearbox—a bit long, a bit rubbery and a bit imprecise during fast shifts. It’s still incredibly easy to use and remains a strong “my first manual transmission” option. But it’s not in the same league as sharper competitors. As for the CVT, I haven’t driven one so I can’t say, but it wouldn’t be my first choice here—other instrumented tests I’ve seen put its zero to 60 mph time in the high-eight second range. If that’s how you want to spend your money, it’s between you, your bank and your God.

I’ll admit to some sticker shock here: $26,830. Though that’s about $10,000 less than the average new car transaction price, it can get you a lot of car if you know where to look—including in the performance segment. And the Corolla Apex doesn’t offer enough to be either a comfortable daily-driver or truly competitive in this class.

The car reminds me of the student who shows up to class without having done the required reading for the day. The one who thinks he (and let’s be real, folks; it’s usually a guy) can squeak through the lecture without getting called on. Or, worse, is so confident in his own bullshitting skills that he thinks he can power through and not sound like a total moron. We’ve all known this person. Hell, I’ve been this person at times, which is probably how I ended up in the ultra-stable, ultra-lucrative world of digital media instead of going to law school like my parents probably wanted. And it’s exactly what the Corolla Apex is: it wants to play in the world of sport compact sedans and hot hatches with its manual transmission, its racy spoiler and its aggressive face, but it doesn’t have the knowledge or the moves to back any of that up. It hasn’t done the homework. It can’t talk its way out of this one.

Not in a world where the GTI is one of the world’s best all-around cars at any price, or where the old-but-great WRX can still take down cars at twice its price tag, or where the current Honda Civic Si is something The Drive deemed the very best $26,000 car you can buy. (In fact, a Civic Si is probably what I’d get myself if I had to buy a new car tomorrow.)

But the Corolla Apex? It’s not a competitor in the sport compact space. It just isn’t. If you’re considering Corolla ownership, go with one of the other models and forego the brittle suspension and racy looks of the Apex. If you want something fun and quick, get a Civic Si instead.

And if Toyota thinks I’m off-base with any of this, it’s more than welcome to bring the GR Yaris to American shores to try and prove me wrong. I’m ready when it is.

Related posts:
Validity of vehicle documents extended till March 31, 2021
Fugitive Wanted for Alleged Six-Month, $100,000 Catalytic Converter Theft Spree
Best News
What's Your Worst Travel Disaster?
01/26/2021
FBI: No crime committed as ‘noose’ rope was there in 2019
06/23/2020
Why VW Pulled The Plug On A 400bhp VR6 Arteon R
06/23/2020
2021 Kia Grand Carnival breaks cover – solid looker! – paultan.org
06/24/2020
New Volkswagen Arteon Shooting Brake arrives as part of facelifted line-up
06/24/2020
Recent Posts
This website uses cookies to improve your user experience and to provide you with advertisements that are relevant to your interests. By continuing to browse the site you are agreeing to our use of cookies.Ok