There have been a few additions/mods to the bike in the intervening period and they have improved the riding experience in a very subtle manner.

BHPian TRR recently shared this with other enthusiasts.

An update on the GSX-S750 ownership

It’s been a while since I updated the thread. The odo is currently at 20,300 kms as of today, so I have put in 7,800 km since taking ownership of the bike. Has been a slow couple of months with the odometer climbing slowly since I was out of work for a bit. Even though I was on a personal break from working, I will admit that I haven’t been able to put together as many weekend rides out as I wanted to.

So here’s a minor (long post alert though) update on the “Apex Predator” as Suzuki likes to call it. This update isn’t in a chronological sequence and is just a collection of thoughts on life with the bike In the months since the last service in December (which was just after the office commutes ended), I have stitched together ~4,000 kms on the clock and must say that the bike is chugging along quite nicely. There have been a few additions/mods to the bike in the intervening period and they have improved the riding experience in a very subtle manner.

First, the Eazi-Grip tank grips were fitted to the bike in the beginning of April. I placed my order for these with Retro Rides, located in Delhi, and since the tank grips specific to the GSX-S750 were out of stock, these were imported on order. Took around a month and a half to reach me in Bengaluru. They definitely aid in gripping the bike with my thighs, but the top half of the grips are useless to me since my thighs barely reach that height, even with me placing the balls of my feet on the foot-pedals and raising my heels all the way up. The below half is useful, however, and is perfectly located for my usage. I’m still getting the hang of riding and gripping the tank with my thighs constantly though. I screwed up a bit while fixing the right-side grips and these air bubbles were the result. Thankfully though, the bubbles have since disappeared and the tank grips on either side are perfectly adhering to the tank surface. Next, the bi-annual service of the bike was due. The bike had run only 3,500 kms since the last service in December, but I decided to take it in for its service in May itself, considering that I would soon have to report in to work at my new job and would rather not face the discomfiture of the downtime that a service would entail. As usual, called up Mr Hafiz and booked the service appointment for a Wednesday and rolled the bike in to Aerolex Suzuki.

This would be more than a routine service, since I wanted the chain-sprocket set replaced with the parts I had brought in from Europe. The service centre was thankfully empty and the bike was straightaway rolled in to the service bay. I couldn’t stay back to watch the process since there were some personal commitments I had to tend to, but Mr Hafiz ensured that I was constantly updated on the service progress. 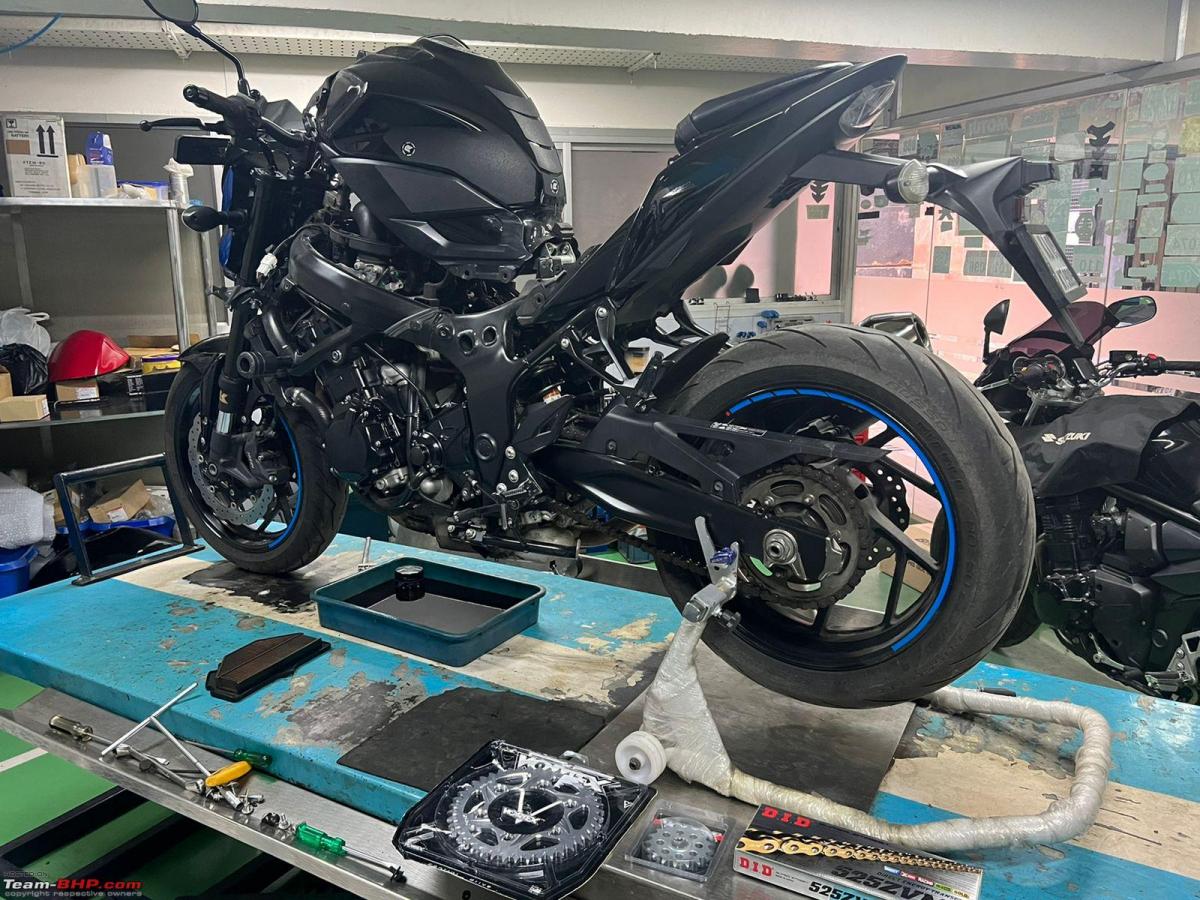 The stock air filter was due for replacement since it was dirty inside-out. I was told by the previous owner that a K&N filter was fitted in, but looks like that wasn’t the case. The bike still had the OEM filter in place and the SVC didn’t have new OEM filters in stock. On Mr Hafiz’s recommendation, took the call to replace it with the BMC air filter. Mr Hafiz himself procured the BMC air filter from his contacts for me at almost 25% lesser than the market price and in went the BMC air filter. The new filter in place

The new chain and sprockets lined up and prepped for replacement The rest of the service was routine, along with the oil and oil filter being replaced. Mr Hafiz recommends to stick with the Motul 7100 and I went along with his recommendation. Even though the existing oil was only in for 3,500 kms, it still poured out as a dark liquid (as seen in the pics above). Since a significant part of the bike’s usage pattern is inside the city, I think I’ll stick to an oil replacement interval of 4,000-4,500 kms. The total service cost me ₹9,500, with ₹3,500 of labour (of which ₹1,000 is towards the chain sprocket replacement). For the air filter, I reimbursed Mr Hafiz separately since he procures the stock from his own pocket. They tack on a ₹500 cleaning and polishing charge in the labour bill, which I don’t really require, since I make sure the bike is clean and polished at home. But frankly, the quality of service is exceptional and I have made my peace with paying this minor amount.

During my service visit, I also acquired all the bills of the bike’s entire service history (had only perused the same while purchasing it from the last owner). Will try to make a separate post with full details on the services done so far from the date of purchase. Should give a fair idea of Suzuki’s service costs for anyone looking to buy a big bike from this stable.

Next up, was a group ride in mid-March 2022 organized by the folks at Aerolex Motors. Since the showroom arranged the ride, the turnout was quite healthy with 35-ish Hayabusas, 20+ V-Stroms and 4 GSX-S750s (including mine) reporting in for the ride. The group started off from the showroom, regrouped at Indian Paratha Company, near Nandi Hills and concluded at the Marriott hotel inside the Prestige Golfshire campus near Nandi Hills. The ride was extremely well-organized and the riders were given a bit of freedom on the highways and not choreographed and herded at 60 kmph on the highways. The best part was getting to be in the presence of those 35 Hayabusas with almost 90% of them running full system exhausts. The sight and sounds of such a large number of these beasts was truly special.

The Aerolex folks had arranged for breakfast at the Marriott inside the Prestige Golfshire campus and the spread was sumptuous and vast. Post breakfast, we were all free to leave at our leisure and head back home. Every single rider was given a goodie-bag with a microfibre cloth, 3M helmet cleaner spray, 3M bike shine spray and an Aerolex Suzuki T-shirt. None of us paid a single penny for the whole affair. I can’t say enough about Aerolex’s excellent after-sales service. Organizing rides like these, combined with the excellent service centre, makes buying a Suzuki big bike a truly special experience.

The bikes at the meeting point at Aerolex Motors 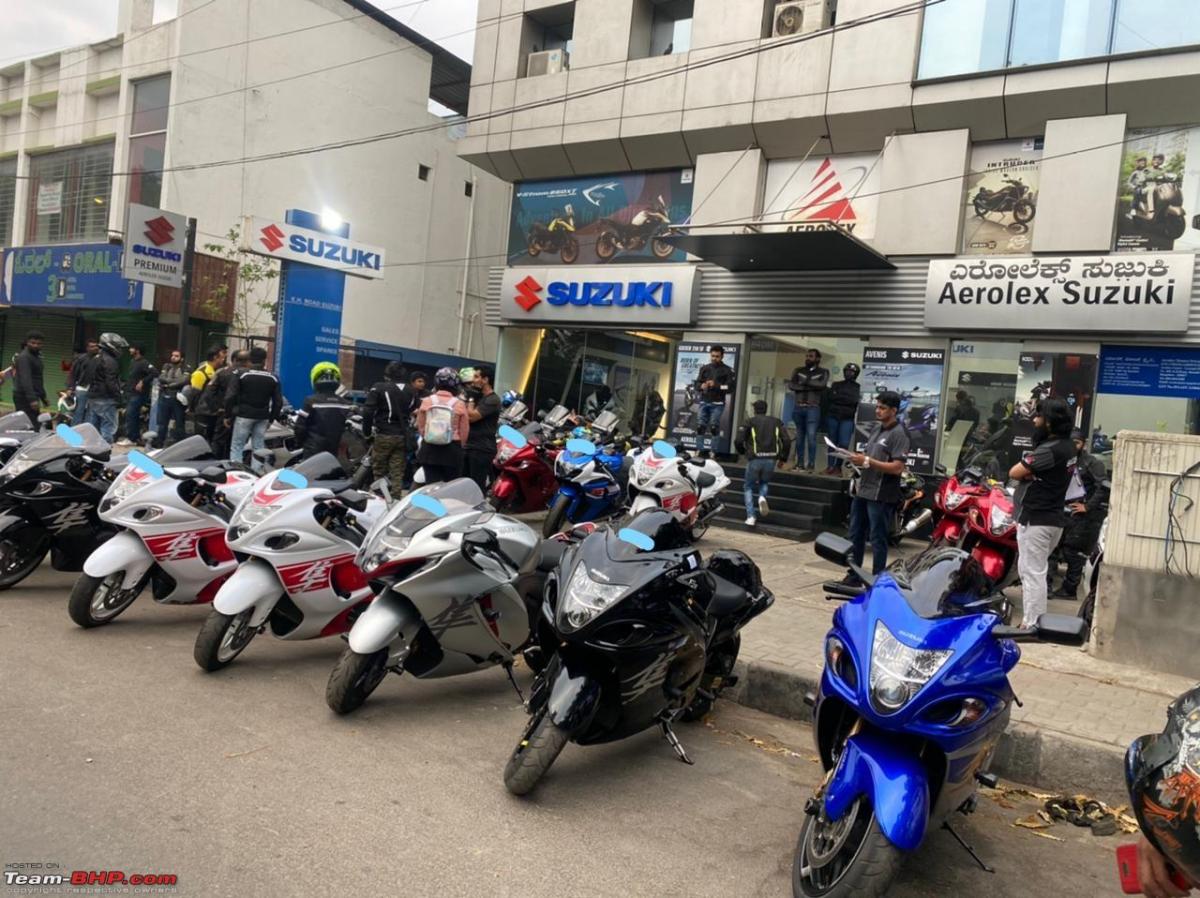 The entire gathering at the final location 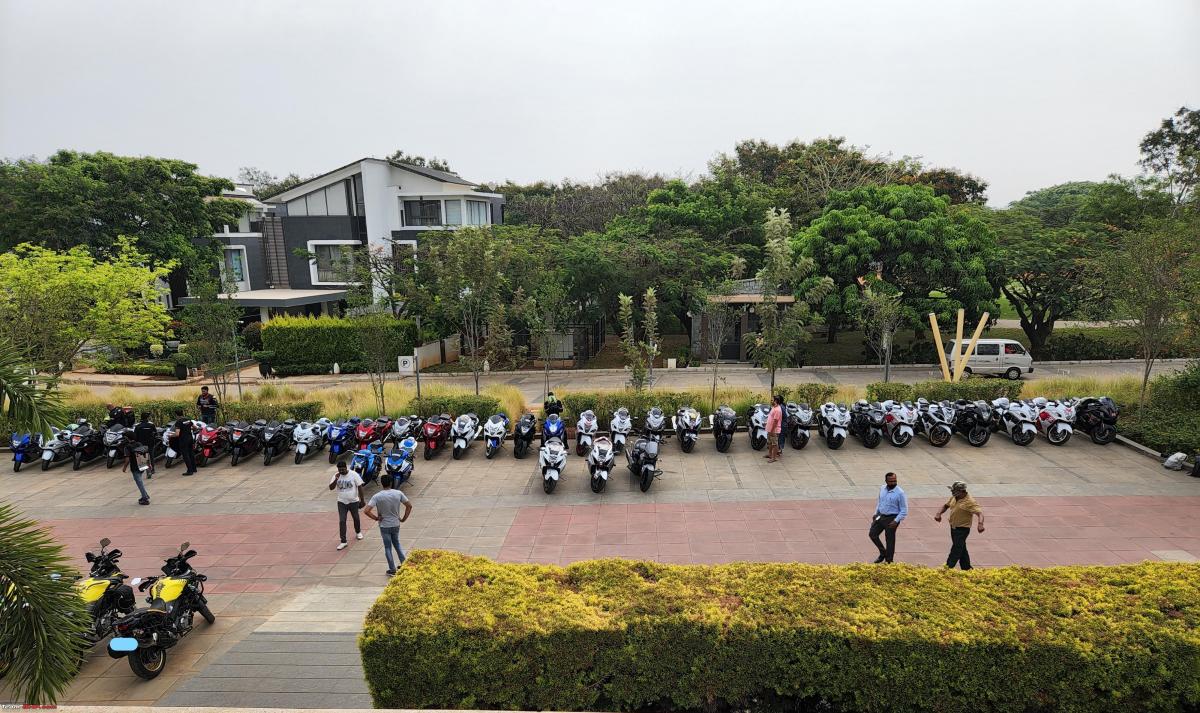 The V-Stroms all lined up together 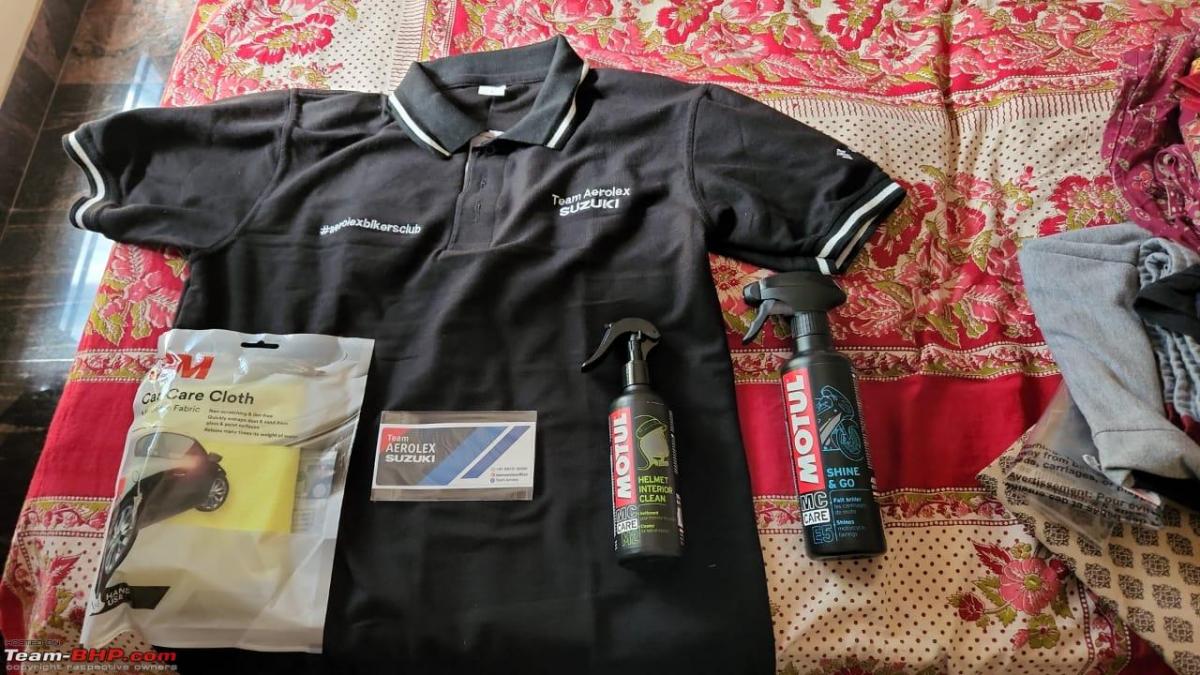 One thing about the bike ownership aspect that I have to revisit though is the heat management, especially in the summer. In cooler climates (with max temps < 30 degrees), the heat management is great. The coolant temperature never crosses 50% of the temperature range and I have no qualms of taking the bike out in peak traffic in such climates. But with this being my first summer (and a truly hot one at that) with this bike, I too had to experience the bane of every superbike owner’s riding experience. I had to ride out to Phoenix Marketcity in Whitefield from Banashankari (fellow Bengalureans will know the pains of this “cross-country” road trip) and had to endure the worst traffic pile-up at the Tin Factory junction exactly at noon. With the blazing hot sun out in full force and the traffic crawling at barely 1km/hr, the bike’s heat management system gave up and couldn’t hold the bike temperatures at the usual 50%, even with the radiator fan spinning at full speed. As I crawled on in the choc-a-bloc traffic for almost 30 minutes, the gauge rose all the way to the top. I became extremely worried as a shut-off was imminent with the overheat warning sign turning on. But the bike held out for the couple of minutes that was needed to break free from the traffic jam and as soon as my pace picked up, the temps started dropping quickly. Lesson learned, definitely need to avoid peak traffic in the summer on the GSX. I guess I grew overconfident in the bike’s capability to deal with the heat since I had so far only used it in the rainy season and winter. To the bike’s credit though, the heat thrown on me and my legs was not excessive even when the bike started to overheat. But seeing that temperature gauge climb up to full makes you sweat like a pig regardless.

Other than this, I have now switched jobs and have resumed the office commutes, which would be ~30km of riding a day. The bike continues to chug along quite nicely and the ownership experience remains as pleasant as it was when I initially wrote the review (fingers crossed that it stays that way)

Here are some parting shots of the bike in various settings: 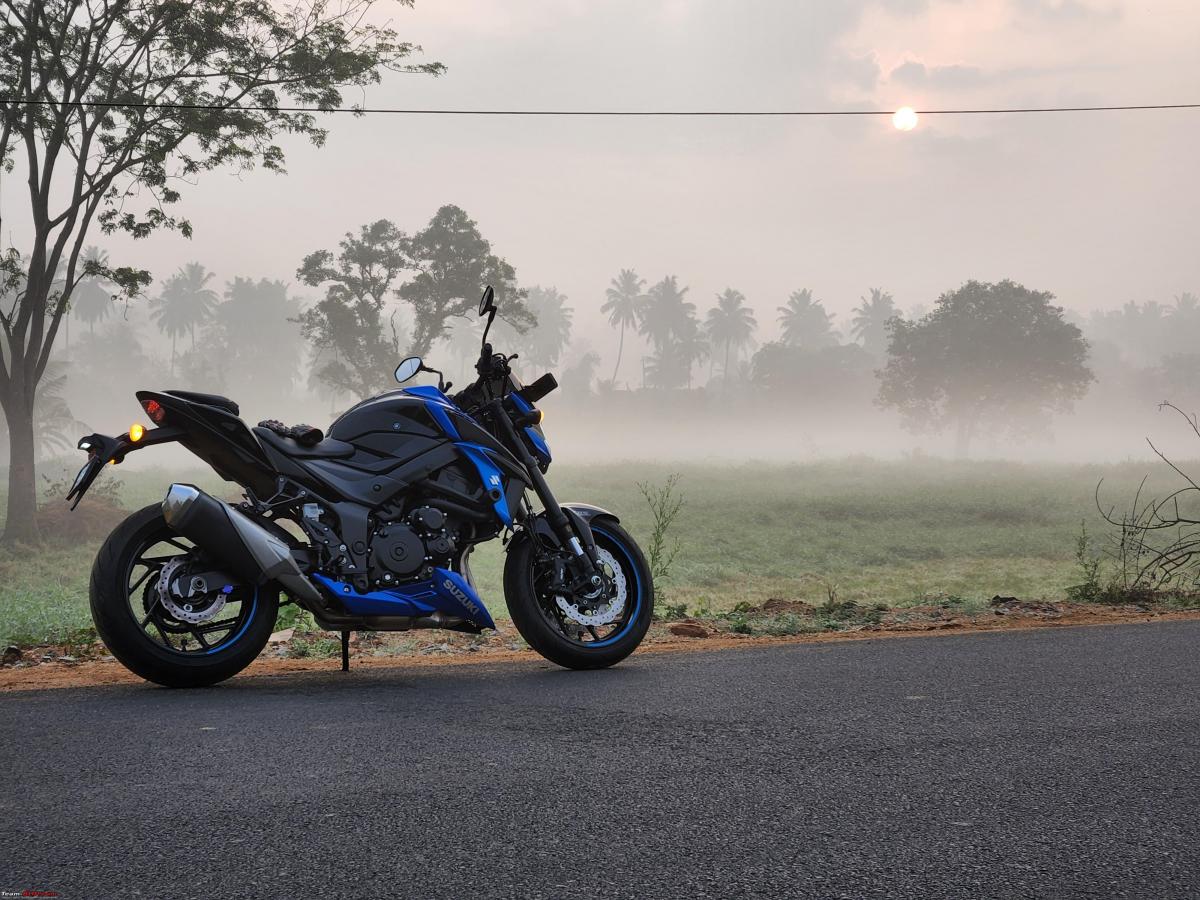